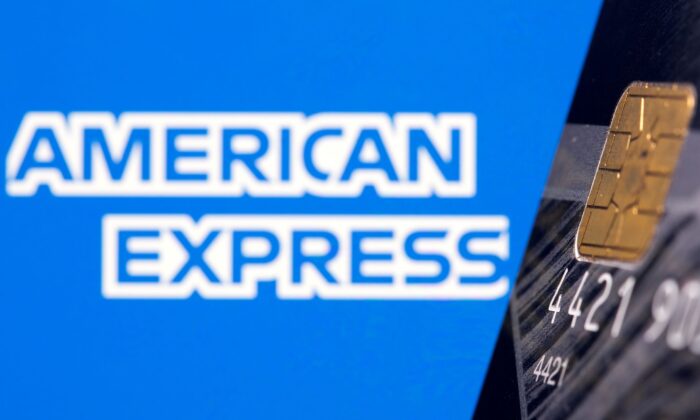 A credit card is seen in front of displayed American Express logo in this illustration taken on July 15, 2021. (Dado Ruvic/Illustration/Reuters)
Russia-Ukraine War

American Express announced on Sunday it is suspending its services in Russia.

In a memo, company chairman and CEO Stephen J. Squeri said, “In light of Russia’s ongoing, unjustified attack on the people of Ukraine, American Express is suspending all operations in Russia.”

The suspension extends to neighboring Belarus.

The CEO expressed that staff were working to assist customers impacted by the decision with travel arrangements “to help them evacuate their employees and other stakeholders in affected areas.”

The company also pledged $1 million to support aid organizations in Ukraine and neighboring countries impacted by Russia’s invasion, while also committing to match donations made through the American Express Match program.

The announcement comes a day after competitors Mastercard and Visa said they were suspending operations in Russia. Payment processes PayPal also suspended its services in Russia the same say, although it is allowing for withdrawals “for a period of time.”

While Mastercard and Visa said they expected their pullout to leave customers in Russia cut off from accessing funds using their cards, Russia’s local government-sponsored card scheme Mir released a statement saying that domestic transactions using the Mastercard and Visa networks were still working at Russian merchants and ATMS—at least for now.

“All cards of these payment systems already issued by Russian banks will continue to work within our country as before,” the operator said early Sunday.

“Until the expiration of their validity, Visa and Mastercard cardholders have access to all the funds on their accounts, as well as all the usual payment transactions–paying for purchases, transferring funds from card to card, withdrawing cash, etc.”

This is because, since the West’s 2014 sanctions following Russia’s annexation of Crimea, Russia has made changes to its domestic payments system in agreement with foreign companies to direct all transactions through a national system that isn’t dependent only on foreign systems.

Mastercard and Visa in 2014 had cut off services to several Russian banks, which fueled Mir’s initial growth, in addition to government initiatives promoting the card—particularly among government workers and welfare recipients.

Mir’s establishment was ordered by Russian President Vladimir Putin and it has been operating since 2015 as a local option to compete against foreign card providers.

According to GlobalData, Mir’s market share by June 2021 had grown to 25.3 percent in terms of transaction value, with Mastercard and Visa accounting for most of the rest.

Visa on March 2 disclosed in a filing with the U.S. Securities and Exchange Commission that about 5 percent of its revenue in the 2021 financial year was from business in the Russian and Ukrainian markets.

Meanwhile, as the West tries to isolate the Russian economy, China is keeping its networks open, connecting its SWIFT-reliant but substitute Cross-border Interbank Payment System (CIPS) with Russia’s System for Transfer of Financial Messages (SPFS).

However, according to Nikhil Reddy, payments senior analyst at GlobalData, “Although CIPS provides a lifeline to Russia for international trade, consumer-level payments are likely to be hit hard.”

With Russia’s preparations since 2014 to reduce its reliance on Western providers, Reddy said “there has been growing adoption and usage of Mir cards among Russians,” although it still lags behind its international peers.

But Reddy warned, “While the sanctions are set to significantly impact the Russian payments market, it will benefit local card schemes as banks are likely to migrate from international schemes to Mir cards, which will result in further rise in its market share.”