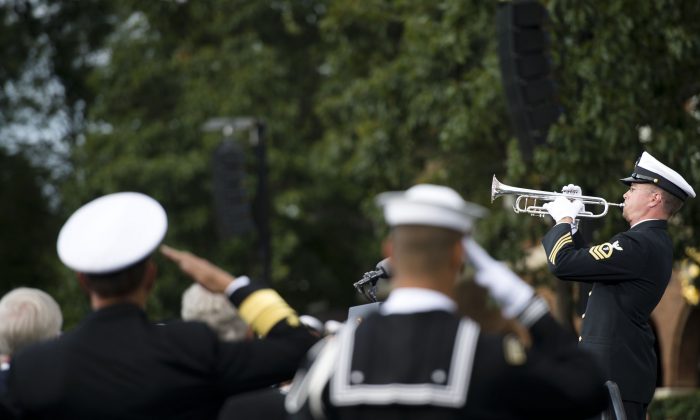 Two sailors salute as taps is played during a memorial service at the Marine barracks in Washington D.C., Sept. 22, 2013. (Courtesy Erin A. Kirk-Cuomo/Department of Defense)
News

These are challenging times for police and communities throughout America.

As we celebrate holy days that call for peace on Earth, we continually witness acts of violence.

Headlines bombard us with campus, domestic, school, and workplace violence tragedies as well as acts of terrorism.

Just 10 days before Christmas, on Monday, Dec. 15, the nation witnessed a horrific domestic-violence killing spree in the Philadelphia suburbs.

According to the district attorney for Montgomery County, Pa., a suspect allegedly killed his ex-wife and her mother, grandmother, and sister, as well as the sister’s husband and their 14-year-old daughter. The sister’s 17-year-old son was also wounded in the carnage.

This kind of senseless tragedy—killing of numerous family members—is happening all too frequently.

On Christmas Eve 2008, nine people were killed from a combination of gunshot wounds and arson fire in Covina, Calif. The slayings left 15 children without one or both parents. It was committed by a man seeking revenge against his ex-wife and her family after being divorced just a week prior.

In still another domestic violence carnage, a man despondent about losing his job killed his wife and their five children in Los Angeles on Jan. 27, 2009. After killing his entire family, he committed suicide.

Since the Columbine High School tragedy (12 students and 1 teacher killed) on April 20, 1999, school and campus violence has no end in sight.

Additional tragedies include the following:

• Marysville-Pilchuck High School, Oct. 24, 2014. Five people in the school cafeteria are shot with four fatalities.
• Sparks Middle School, Oct. 21, 2013. A 12-year-old shoots and kills a teacher. He also shoots and wounds two other 12-year-olds.
• Sandy Hook Elementary School, Dec. 14, 2012. Twenty children, ages 6 and 7, and six faculty and staff killed.
• University of Alabama, Feb. 12, 2010. Three people are killed and three wounded in shootings by a biology professor.
• Discovery Middle School, Feb. 5, 2010. A 14-year-old dies after being shot in the head in a school hallway by a fellow ninth-grader.
• Virginia Tech, April 16, 2007. The deadliest shooting incident by a single gunman in U.S. history with 32 killed and 17 wounded.
• Georgetown Amish School, Oct. 2, 2006. Five girls killed and six wounded
• Episcopal School of Jacksonville, March 6, 2012. A fired Spanish teacher kills the principal with an AK-47 assault rifle.
• Santa Monica College, June 7, 2013. Six people are killed by a gunman after a shooting spree.
• Florida State University, Nov. 20, 2014. Three students are shot by a gunman who was an alumnus of the university.

Some of America’s most notorious workplace violence tragedies include the following:

• The Washington Navy Yard killings of Sept. 16, 2013, that took the lives of 12 and injured eight others.
• A former postal worker killed a previous neighbor before driving to the Goleta, Calif., post office where she shot and killed six workers before committing suicide in 2006.
• A day trader killed his wife and two children before killing six others at two workplaces in 1999.

Although Sept. 11, 2001, is the pivotal point of American history related to terror, other cases include the following:

• The hatchet attack against a group of NYPD officers in 2014 by a self-radicalized extremist.
• The 2013 sentencing in the plot to bomb the Federal Reserve.
• The jihadi-planned attack on the U.S. Capitol in 2012.
• Shooting of an officer at the Holocaust Museum by a white supremacist on June 10, 2009.
• The plan to attack soldiers at Fort Dix Army Base in 2007.

Police who dedicate themselves to protect and serve cannot stop the carnage alone. We must ignite the principle that “the police are the public and the public are the police.”

When this police-public collaboration is forged, America will begin to realize the reawakening of the nation.