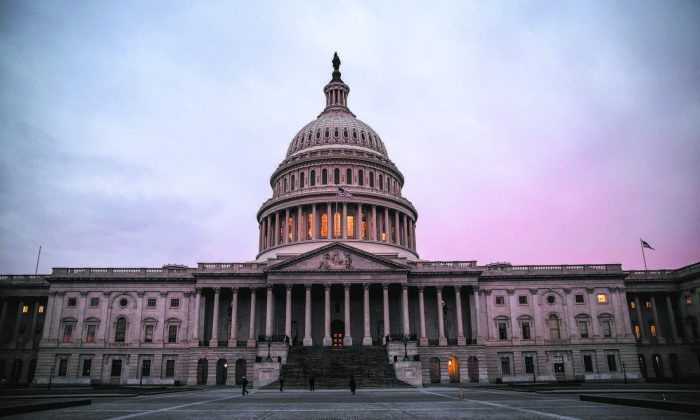 Group works against US Constitution and controls selective flow of information to the public, panelists say
By Joshua Philipp
Print

A group of career politicians often referred to as the “deep state” or the “permanent government” is pushing an agenda that goes against the Constitution and U.S. law, while also selectively leaking information to manipulate public perception.

These were among the claims from experts speaking on a Sept. 15 panel hosted by the conservative, nonpartisan watchdog group Judicial Watch. The panel followed the publication of a report that exposed the unelected government of the United States, often referred to as the deep state.

According to Judicial Watch, the deep state is a bureaucracy of permanent officials in branches across the U.S. government who share a common far-left agenda and use their positions to selectively enforce or block actions based on their own interests. Being in unelected positions, the deep state is able to continue its activities regardless of who the sitting president is.

Diana West, journalist and author of the book “American Betrayal: The Secret Assault on Our Nation’s Character,” said during the panel that the deep state represents “unconstitutional powers, exercised by strange, illegitimate branchlets of the U.S. government that are in no way restrained by the balance of powers.”

The deep state came to the surface during the presidential campaign, mainly to challenge Donald Trump, and it has continued to operate relatively in the open while trying to undermine Trump’s presidency.

A few key issues appear to have irked the deep state, West noted, which are Trump’s positions on immigration, national trade and tariffs, radical Islam, and the restoration of American sovereignty, as well as his bid to end wars not fought over American core interests.

These issues are typically not on the table during political debates of government candidates belonging to the establishment. She said, “These issues have essentially been taken from us by the powers that always seem to be. They were settled. And then along came Trump.”

She said that these issues provide clues to the ideology of the deep state, which “shows itself to be fanatically globalist and anti-nationalist.”

“[The deep state] is interventionist. It favors mass immigration and even open borders. It supports free trade,” she said, adding that it also appears to support radical and political Islam.

Its policies, she said, “are building blocks of a socialist ‘paradise.'” Members of this permanent structure appear to exist not just among Democrats but also among Republicans, she said.

“During my own campaign coverage, I was able to find striking similarities between the beliefs of mainstream, anti-Trump Republicans and the programs set forth in a 1932 book called ‘Toward Soviet America,'” she said, referring to the book by William Foster, who was chairman of the Communist Party USA. The party was believed to have operated under the auspices of the Soviet Union.

Sebastian Gorka, a former deputy assistant to the president who only recently left his job at the White House, shared his own experiences with the deep state from his position in the Trump administration.

“I’ve seen the worst of the worst, [during] the first seven months, of how the bureaucracy responded to the administration of Donald J. Trump,” he said, noting that within the government, the deep state operates overtly, in plain view.

“It was in our faces. It was arrogant. It was right there in the surface of our policy discussions at the White House,” he said. “This is not just a reaction to a New York mogul who became president. This has been brewing for decades, truly decades.”

Among the ways the deep state has reacted to the Trump presidency is by making selective leaks to the media. Gorka noted there were 125 national security leaks in the first 126 days of the Trump administration, and at least 60 of those leaks were of “serious national security matters.”

Gorka explained one of his own encounters with the deep state. As a former professor, Gorka has taught many young men and women in the national security field. When he entered the White House, he wanted to bring over some of his students who were now members of the intelligence community.

“I identified the three best individuals, and requested—as a deputy assistant to the president—that these people be detailed over to me at the White House to work on key projects of importance to Steve [Bannon] and the president,” he said.

“In the six months I was in office, not one of those people was detailed over to me from an unnamed sister agency,” he said.

Not only were the individuals not moved, as requested, but Gorka said he later discovered that “not only did the sister agency stop their detailing, [but] every single individual was taken off their current duty roster and punished, and put into menial tasks.”

“Why?” he said. “Because the 7th floor of that agency, to quote a senior individual, ‘looks at the White House as the enemy.'”

While Gorka did not name the agency, he did mention the “7th floor.” It has long been known that individuals on the 7th floor of the State Department operate what the FBI has referred to in its reports as “The Shadow Government.”

The FBI described The Shadow Government in a 2016 report on the investigations into former Secretary of State Hillary Clinton. It stated, “There was a powerful group of very high-ranking State officials that some referred to as ‘The 7th Floor Group’ or ‘The Shadow Government.'” It said the group met every Wednesday afternoon to discuss public information requests and “everything Clinton-related to FOIA/Congressional inquiries.”

The FBI report also noted that the group had changed protocols on how documents on Clinton were released, and that the group “did have control of the release process for the approximately 30,000 emails, or 52,455 pages related to the Clinton FOIA request, and it was decided to be a rolling release.”

The permanent bureaucrats on the State Department’s 7th floor also have a notorious reputation among members of the U.S. intelligence community, who refer to them as “bow ties,” “Mandarins,” and “Black Dragons.”

The Black Dragons were described in a 2010 report from geopolitical intelligence company Stratfor as “a powerful element within the State Department that is averse to security and does its best to thwart security programs.”

Todd Shepherd, an investigative reporter at the Washington Examiner, said the deep state violates a basic duty of the American government: sharing information with the people.

“Under the fundamental philosophy of the American constitutional form of representative government that adheres to the principle that government is the servant and not the master of the people,” Shepherd said, “it is the policy of this state that each person is entitled, unless expressly provided by law, at all times to complete information about the affairs of government and the official acts of public officials and employees.

James Peterson, senior attorney at Judicial Watch, said that the deep state aggressively blocks freedom of information requests on select information. In his own experience, they have continued to selectively block information regardless of who the sitting president is.

“The permanent state, the deep state, the bureaucracy, is intent to remain, and is planning to,” Peterson said. In spite of efforts through the courts to obtain information, he said, “it is difficult at each stage.”

Gorka said that the functions of the deep state go against the Constitution and its guidelines on the structures and functions of government. Agencies, he said, are supposed to work for the White House, which is supposed to represent the American people. He said, “They co-opt the media into being willing or unwitting agents in a very selective flow of information.”

In these agencies, “you are there to serve the interests of the president, who has been duly elected by the electoral college, which represents the American people,” he said, and noted the deep state’s view that a presidential administration is its enemy “leads to very, very dangerous things.”

“The philosophical underpinnings of what put Donald J. Trump into the White House is sovereignty—that a sovereign nation is a healthy nation. And ‘the swamp’ vehemently, philosophically disagrees with that,” he said.

In the government today, Gorka said, there are a large number of people who have already been in power for many years and believe they’ll still be in power regardless of the sitting president, and so they play by their own rules. “That’s not democracy, and that’s not the American way,” he said.