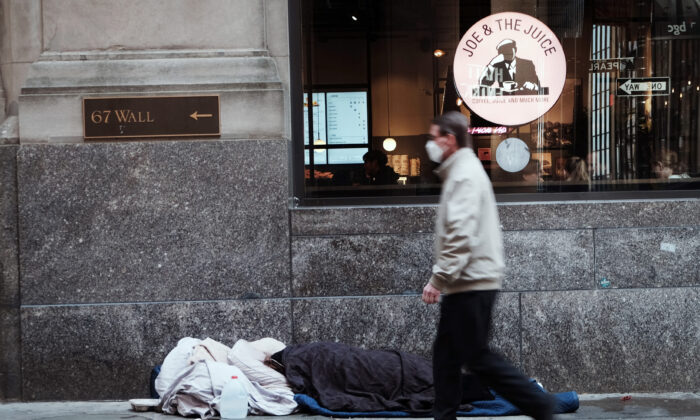 America’s Recession Will Be Long and Severe; Those Who Say It’ll Be Short and Shallow Are ‘Delusional’: Roubini

Economist Nouriel Roubini has warned that there are currently only two paths for America’s economy—either uncontrolled inflation or a long and harsh recession—with his base case being a long and painful economic downturn rather than a short and shallow contraction.

Roubini, who got the nickname “Dr. Doom” after predicting the market crash in 2008, told Bloomberg in an Aug. 15 interview that if historical precedent is a guide, then key economic indicators point to continued aggressive monetary tightening by the Federal Reserve—and a harsh recession.

“In the United States, whenever you had inflation above 5 percent and unemployment below 5 percent, the Fed tightening has led to a hard landing,” Roubini said.

Unemployment in the United States is at 3.5 percent, and the latest Consumer Price Index (CPI) inflation gauge came in at a 8.5 percent year over year.

The Fed’s preferred inflation measure, the core Personal Consumption Expenditure (PCE) price index, which strips out energy and food, is running at 4.8 percent, more than twice the central bank’s target of 2 percent.

“So my baseline is a hard landing,” Roubini said, referring to an economic slowdown that dips into negative territory and predicting that the ensuing recession will be long and harsh.

Roubini conceded that inflation may have already peaked in the United States, but the key question is how long it will now take for it to fall toward the Fed’s inflation target of 2 percent.

“With the Fed still having real rates on the policy side highly negative, I don’t think the monetary policy is tight enough to push inflation toward 2 percent fast enough,” Roubini said.

“We are still in a severely inflationary environment, not just in the United States but around the world,” he added.

While goods prices have generally fallen, Roubini said there remains significant upside for inflation in services and, potentially, some commodities, such as energy, food, fertilizer, and industrial metals.

“Goods inflation may be going down, [but] service inflation, especially shelter and others, is still quite persistent,” he said.

Wages are growing at a much higher rate than productivity, Roubini said, and, “therefore, there is a wage-price spiral” even if prices are growing faster than earnings.

How High Will the Fed Hike?

Asked how high the Fed needs to hike rates to tame inflation, the economist replied that he thinks that the federal funds rate should go “well above 4 percent,” to as high as 5 percent, to get inflation down to target.

Markets are expecting a 50 basis-point hike at the Fed’s next meeting in September, followed by another 50 basis-point hike in November and a 25 basis-point rise in December, before hitting pause, according to the CME Fed Watch Tool. This would put the terminal fed funds rate at between 3.5 percent and 3.75 percent.

Roubini called market expectations for a Fed pivot “delusional” in the face of persistently high inflation.

Unless the Fed hikes rates to between 4.5 percent and 5 percent, Roubini thinks that inflation expectations are going to become “unhinged” and the inflationary spiral will ramp up.

But if the Fed does hike rates that high, then what’s coming is a recession.

“Either way, either you get a hard landing or you get inflation getting out of control.”

Roubini earlier blasted as “delusional” expectations that the U.S. recession would be shallow. He told Bloomberg in an interview at the end of July that he expects the United States to be hit by a “severe recession and a severe debt and financial crisis.”

In the Aug. 15 interview, Roubini was asked whether he continues to believe that it’s “delusional” for analysts to expect a short and shallow recession and whether he still thinks it will be long and severe.

“Yes, it is my view,” he confirmed, adding that the massive amounts of public and private debt swirling around in today’s economies, as central banks tighten to tame inflation, means defaults will soar.

Roubini’s view of a long and severe recession isn’t shared by some economists, with Bank of America Chief Economist Michael Gapen telling Fox News in a recent interview that he expects a “mild downturn.”

“Historically, you’re more likely to get something worse than a soft landing,” he said in context of prior tightening cycles and their impact, though he thinks the recession will be shallow.

Tesla CEO Elon Musk said recently he expects the U.S. recession to last around 18 months and that it will be “relatively mild.”

Analysts at ING expect a growth rebound toward the end of 2023 and recessionary forces to come in “a little stronger” next year.

A number of economists have argued the United States is already in a recession after meeting the informal rule-of-thumb definition of two back-to-back quarters of negative growth.

Formally, however, the National Bureau of Economic Research, the organization that declares when the country enters a recession, has not yet declared a downturn.