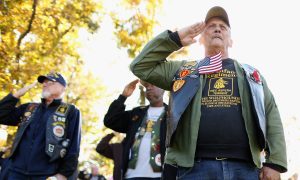 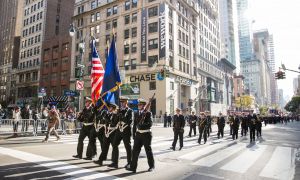 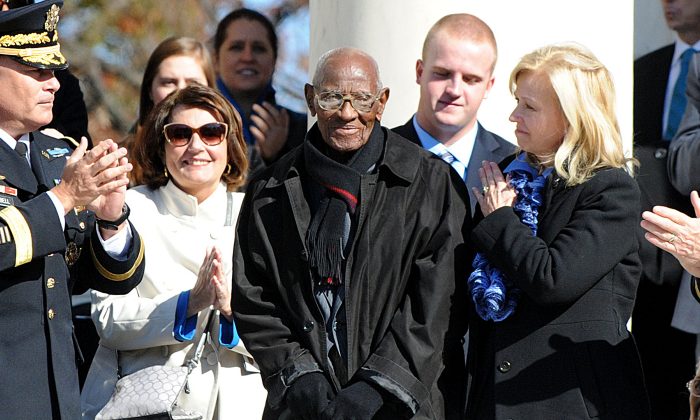 Richard Overton (C), who is believed to be America's oldest living veteran is acknowledged by U.S. President Barack Obama during a ceremony to honor veterans at the Tomb of the Unknowns on Veterans Day at Arlington National Cemetery in Arlington, Virginia on Nov. 11, 2013. (Olivier Douliery-Pool/Getty Images)
US News

America’s Oldest Living Veteran, 112, Expected to be Released From Hospital

The oldest living veteran in the United States is expected to be released from the hospital on Dec. 19, family members said.

He was admitted to the hospital in Austin for pneumonia last week, relatives told Fox 7. He has already battled the illness twice this year, according to his cousin, Volma Overton Jr.

“I want to let everyone know that Richard Overton is in the hospital fighting pneumonia once again for his 3rd battle this year with that infection. So at this time I am asking for your prayers for him and we are so thankful for the love and support that you have given him this past 24 months,” cousin Overton Jr. wrote on GoFundMe on Dec. 18.

“Will give you an update tomorrow on his stay in the hospital. Peace, Blessings and Love to you all.”

A month earlier, he wrote that Overton had just been released from the hospital after being treated for pneumonia. “Given time to recover from this we are hoping that he will be able to speak and do other activities soon,” he wrote.

Overton lives in East Austin in a home he built in 1945.

He has received increasing attention as he’s gotten older, especially after becoming the oldest veteran in the United States. He’s also believed to be the oldest man living in the country.

Overton went on his first private jet ride to Washington in April for a tour of the National Museum of African American History and Culture. In June, his identity was stolen and his personal bank account was drained, but the Bank of America later restored the funds. Overton Jr. said that the investigation into the hack is ongoing.

“What I do know now is that Richard just happened to be one of thousands that this has happened to and that this is much bigger than I could have imagined,” he said.

Overton in May celebrated his 112th birthday on his front porch, which is known locally as his “stage.”

The World War II vet loves to smoke cigars, and regularly smokes a dozen a day, mostly on the porch.

The Morning News reported that strangers often stop by the house on Richard Overton Avenue, renamed after him last year, to take his picture or shake his hand. They can also go to a nearby mural that includes him in it.

After several cigars in the morning, he enjoys a sweet breakfast of waffles, pancakes, or cinnamon rolls with several cups of coffee.

He likes to listen to music, exercise, and travel.

Many of his family members have died, including his nine siblings, his wife, and his ex-wife. He never had any children.

His cousins often stop by and he’s cared for by a rotating group of four nurses. The care is funded through money raised by a fundraiser on GoFundMe, which has garnered over $450,000 in 24 months.

“Richard has out lived all of his closest relatives and is in need of 24/7 home care. We are asking for donations to keep him living in his home instead of a nursing home,” wrote Oveton Jr.