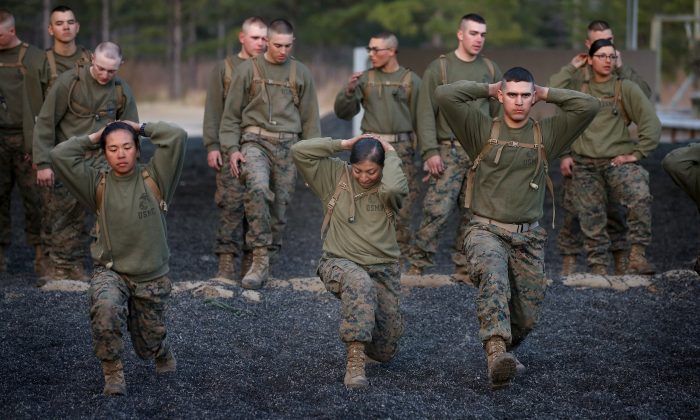 The U.S. military is grappling with a growing threat from an unlikely source: America’s obesity crisis, a new report has found.

Nearly one-third of young Americans are too overweight to join the military, according to the Council for a Strong America, and it is causing difficulties for the military as it tries to recruit the next generation of soldiers.

“Obesity has long threatened our nation’s health. As the epidemic grows, obesity is posing a threat to our nation’s security as well,” said the report (pdf) released by a group of retired admirals and generals, which aims to prepare young people for public service.

According to the U.S. Department of Defense, 71 percent of young people between the ages 17 and 24 do not meet enlistment requirements for the military, and one of the leading reasons for disqualification is obesity.

This, combined with declining interest among youth in joining the armed services, is creating recruitment challenges for the military.

“With interest in military service on the decline, it is critical to our national security that those willing to serve are prepared to meet the standards for eligibility,” the report said.

The U.S. Army announced in September that for the first time since 2005, it would not meet its recruitment goal of 76,500 for the year—falling short by about 6,500 recruits.

Army officials at the time cited low unemployment and a strong economy for the shortfall, but also blamed obesity for playing a role.

“[It’s] a sad state of affairs when 71 percent of the 18- to 24-year-old males in this country cannot qualify to enter the United States Army as a private,” he said.

“Some aspects of the military are going [to go] short and if this trend continues, it’s going to be worse,” Spoehr said.

The obesity problem is also burdening the military after the recruitment stage.

According to the report, the Department of Defense spends $1.5 billion each year on health care for obesity-related issues for both current and former service members, and their families.

Spoehr said he had to dismiss dozens of soldiers who could not achieve army weight standards during his time in service.

In 2015, 7.8 percent of active duty service members were overweight based on body mass index—representing a 73 percent increase since 2011.

The report recognized the military has identified problems posed by obesity, and has taken steps to improve soldiers’ health.

For example, healthier meals are being rolled out in dining halls. The Air Force and Navy run fitness programs, while the Army has implemented the “Performance Triad” program, which provides guidelines for sleep, activity, and nutrition, and aims to encourage healthy behaviors.

Tackling Obesity at a Young Age

The report states the obesity problem ultimately must be tackled early in life—long before a person reaches the age of enlistment.

“Parents and educators can teach healthy eating and exercise habits, while state and federal policymakers must continue to prioritize programs that promote nutrition and encourage physical activity from an early age,” the report stated.

Mattis suggested the problem be solved at the local level, and highlighted efforts of former soldiers in local schools.

“There are retired [service members], who are working across the country, in the schools, to try to restore physical education where it’s been taken out, to try to get school lunches to be things that fuel the body, instead of just giving them crummy food.”

The United States is one of the most obese nations in the developed world, with almost 40 percent of adults, and nearly 19 percent of children and adolescents considered obese.