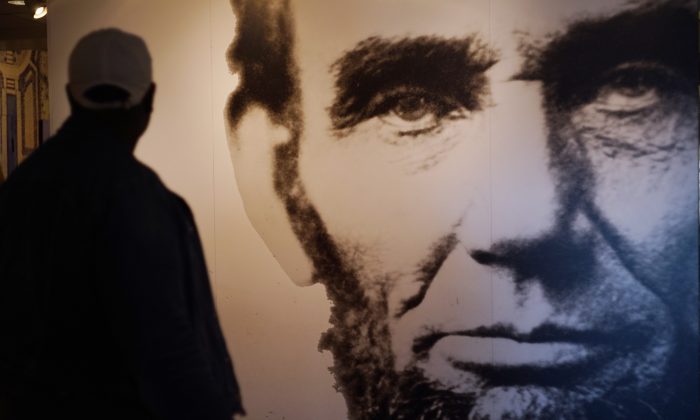 A visitor to an exhibit at the Lincoln Memorial walks past an image of Abraham Lincoln in Washington, D.C., on April 1, 2015. (Mandel Ngan/AFP/Getty Images)
Opinion

As detailed in my article titled “America’s Next President Needs to Have Altruistic Leadership” for the Aug. 13, 2015, edition of Epoch Times, the campaign for our next commander-in-chief is accelerating.

America’s concerns are inseparable from the international community and our next president must be able to remedy concerns at home that include the following: civil rights, criminal justice, economics, employment, environmental degradation, health care, human rights, hunger, immigration, peaceful coexistence, policing, and poverty.

These issues are critical to America, demanding a president with character, ethics, and persuasive leadership. These presidential qualities must not only serve America, but allow our country to be a model of decency for peoples of all nations.

The presidential qualities of character, ethics, and persuasive leadership must not only serve America, but allow our country to be a model of decency for peoples of all nations.

America’s next president must protect ethics with a heartbeat of compassion, character, and courage that remedies moral deficiencies throughout society.

Our nation’s ethical crisis can easily be assessed by the continual cases of public corruption documented on the FBI website.

These cases over the last few weeks alone, expose an ethical crisis including the following:

As detailed in my presentations throughout America since 1999, our ethical deficiencies are crystallized not only through government corruption, but also through corporate, entertainment, sports, and even faith-based scandals.

America will be on the path of renewal, restoration, and rejuvenation only when our president is able to inspire an ethical society devoted to social responsibility, moral courage, patriotic values, and inspirational character.

Our next president must live by ethical principles, which includes the following:

The Ethical Protector: Heartbeat of the President

In another Epoch Times column titled “NYPD Mission: Develop 35,000 Ethical Protectors” published on Aug. 1, 2014, I wrote that “ethics is the law of right conduct and must be paramount in law enforcement mission to protect and serve society.”

The article was written because ethical training initiatives must be world class for police due to their responsibilities to communities and the nation.

But this ethical protector principle is not only applicable to our nation’s law enforcement professionals, under society microscope due to recent controversies. America’s president, and all who seek public office, must also be ethical protectors because of their responsibility to protect and serve society.

As the presidential campaign, along with all seeking elected office, now starts firing on all cylinders, the principle of being ethical protectors is paramount.

This concept is punctuated not only in my leadership initiatives, but in outstanding Conflict Resolution Ethical Protector Certification by Resolution Group International. This program is based on ethical ideals of the U.S. Marine Corps that inspire ethics and personal integrity.

The heart of the program is critical to America’s commander-in-chief and all public servants; “Wherever I go, everyone is a little bit safer because I am there. Wherever I am, anyone in need has a friend. Whenever I return home, everyone is happy I am there. It’s a better life!” from the Warrior’s Creed by Robert L. Humphrey.

America’s next president must be able to realign the nation, inspire an ethical society, and ignite moral courage in the heart of the nation. This will only be possible with a moral compass that inspires altruism, character, and compassion.

American presidential candidates, the eyes of the nation and the world are upon you and demand your dedication to the principles of an ethical protector.