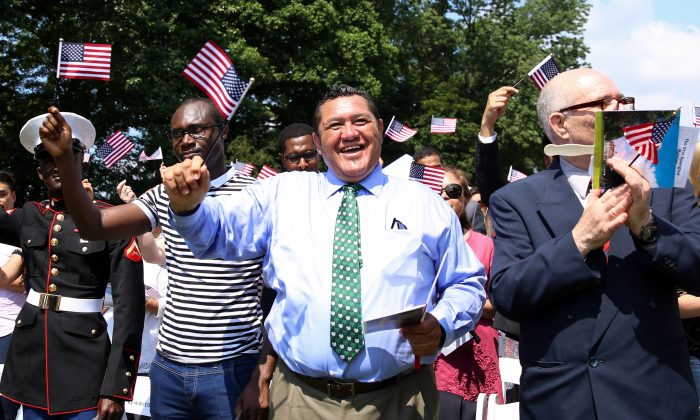 MOUNT VERNON, Va.—The home of President George Washington became the site of naturalization for 101 of America’s newest citizens on the Fourth of July.

In the sweltering heat, the citizens from 50 countries pledged their allegiance to the United States during a ceremony that included a visit from the man himself—well, a very good actor, at least.

“Welcome to my home, my farm, on this twice-special day,” said the actor playing Washington.

New citizen Bert Todd came to the United States as a hired rugby player in 1990. He played New Zealand’s national sport in California, Maryland, and Washington over the years.

“I came over on a visa and they kept me here,” he said. But it was time to relinquish the green card and become a citizen.

“I’ve got family and so I wanted to be the real deal, instead of a green card,” he said. “It’s good for my business—I make pies.”

Todd and his wife opened a New Zealand-style pie shop in Arlington, Va., two weeks ago.

From South to North America

Marcela Posa, 42, said she was honored to be part of the ceremony at Mount Vernon.

“It’s the most important day of the year for this wonderful nation, and I get to become a citizen today, so it’s really the cherry on top,” said Posa.

She moved to the United States in 2006 to start her life with her new husband—an American citizen she had met and married in her native Chile.

“I’d say that’s the most important thing for me [in becoming a citizen]—just being involved and being able to be heard with my vote.”

The couple lives in Ashburn, Va., and Posa is a sales manager for Ann, Inc.

Jose Collado, 36, met Evelyn in his native Dominican Republic in 2012 when they worked together at an animal park.

They fell in love and married, but it has taken years to truly be together. Evelyn, an American, had to move back to the United States to get medical treatment for her migraines. It took 18 months to get all the paperwork cleared for Jose to join her.

They both said it was huge relief that Jose became a naturalized American.

Jose said there was a always a fear that “something could happen and they try to send me back.”

“And now when you become a citizen, that goes away, you can fully live your life,” he said. “Not only that, but this country gave me a chance—to be with the woman I love, to be with a family, and to reunite with my family.”

Joining Jose and Evelyn were Evelyn’s parents and Jose’s sister and nephew.

For Thao Tran, the ability to now vote is the most precious part of becoming an American citizen.

“Before, I didn’t get to vote, even though I wanted to. That’s the main thing I am really excited about,” she said. “It’s a day I will never forget.”

Tran, 27, came to the United States as an international student from Vietnam. She married a fellow countryman who naturalized two years ago in a high school stadium.

The couple plans to have children in the next few years.