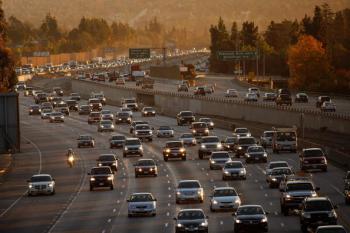 Morning commuters travel the 210 freeway between Los Angeles and cities to the east near Pasadena. California has some of the toughest clean air laws after decades of fighting some of the worst smog in the nation. (David McNew/Getty Images)
US

Kristina Skorbach
Kristina Skorbach is a Canadian correspondent based in New York City covering entertainment news.
View profile
Follow
biggersmaller
Print
In this week's American Lung Association report, California still fell short on reducing the air pollution that it spews into the atmosphere annually. It has made improvements. Bakersfield, Calif. was rated the No. 1 most polluted by short-term particle pollution, No. 2 for worst ozone pollution and No. 2 most polluted by year-round particle pollution.

The American Lung Association states that more than 91 percent of people in California, especially teenagers and the elderly are affected by hazardous air pollutants. On average, a Californian breathes polluted air for more than 100 days in a year.

The Central Valley stretches vertically along the southwestern region of California and is the area with the highest air pollution. Air pollution generated in this region gets trapped in the atmosphere because the valley is fenced to the right by the Sierra Nevada Mountains. The most prominent factors contributing to air pollution are transportation, port sites, oil refineries, and power plants.

Several California cities ranked in the top 10 most polluted by short-term particle pollution. Fresno-Madera had the No. 2 spot and Los Angeles- Long Beach-Riverside was at No. 4. Almost 18 million people inhabit Los Angeles where more than a million cases of adult asthma were recorded in the 2008.

Phoenix-Mesa-Scottsdale, Arizona ranked No. 1 most polluted by year-round particle pollution which prompted a reaction statement from director of Arizona Department of Environmental Quality, Benjamin H. Grumbles.

“I disagree with the methodology used to grade the Phoenix-Mesa-Scottsdale metropolitan area. … This finding came about because of one lonely air quality monitor near the Cowtown area of western Pinal County, nearly 40 miles and across the mountains from downtown Phoenix,” said Grumbles in his official statement.

Grumbles added that he appreciates the work by American Lung Association and he realizes that Phoenix does have significant air pollution problems. The Department of Environmental Quality is trying to improve the air in the three cities.

One of the major health risks posed by serious air pollution is a decreased life expectancy. Ozone severely affects youngsters who spend time outside, the elderly, and those who work outdoors. It can trigger asthma and lead to increased susceptibility to respiratory infections and other problems.

Some of the cleanest cities were Cheyenne, Wyo., Bismark, N.D., and Alexandria, La.