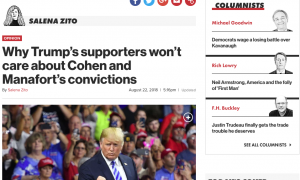 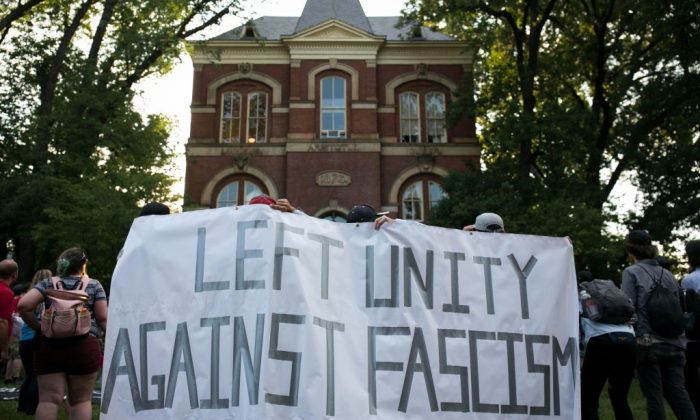 Activists demonstrate on the campus of The University of Virginia one-year after the violent white nationalist rally that left one person dead and dozens injured, in Charlottesville, Virginia on Aug. 11, 2018. (Logan Cyrus/AFP/Getty Images)
Viewpoints

Our previous treatment of America’s “Ministry of Truth” discussed tenets that have such an iron grip on progressive minds as to make them impervious to examination.

Tenet One’s prohibition of questions bursts into the public sphere whenever progressive policies are scrutinized. Of the hundreds of cases that can be cited, the experiences of Michael Rectenwald, Amy Wax, Scott Yenor, and Lisa Littman are particularly instructive.

Turning a critical eye to Tenet Two—the fanatical commitment to a fictitious world—is especially provocative to America’s Minitrue laborers. For instance, how dare anyone doubt the 97 percent—actually, the figure is less than 1 percent—of “scientists” who believe that human activity generates global climate change? For shame!

Shame is one thing that Minitrue commissars never sense lurking in their questionable consciences—shame about admitting mistakes, promoting a national socialism death-wish, or establishing their preferred state on a foundation of lies, as Alexander Solzhenitsyn might have said.

Minitrue scribblers and talking heads never look back, they only look forward.

That being the case, what do they see on the horizon? Exactly what their mentors in the universities have been conjuring during the past generation or so: a witch’s brew of grotesqueries that Americans outside the academy can scarcely believe.

It is only a matter of time before Tenet Three becomes as widely disseminated in our national conversation as climate change and politically incorrect tweets.

When Joseph Stalin ruled the Soviet Union, a state security official outlined this principle to guide government prosecutors: “Do not look for evidence that the accused rose up against Soviet power with arms or with words. The first thing you should ask is to which class he belongs, his social origin, his education, and his profession. It is these questions that should decide his fate.”

In other words, guilt clings to persons on the basis of who they are and not what they’ve done, which is usually nothing. Further, accusation equals guilt; once someone is accused, he or she is presumed guilty (why else make the accusation?) and is consigned to the hellish purgatory of non-existence in a concentration camp before death mercifully makes its final claim.

In short, specified categories of humanity are declared “objective enemies” on the basis of an officially dictated creed—in this case, Soviet Marxism (or Stalinism).

Of course, death camps don’t exist in America, in spite of many leftists’ bizarre analogies, but their guiding principle manifested in Nazi Germany and Stalinist Russia strongly resembles assumptions that justify hundreds of administrative “Diversity and Inclusion” offices throughout the land.

Thus, forums on “ending whiteness,” or courses on “White Supremacism” litter conference activities and course schedules at colleges and universities, indoctrinating impressionable teenagers to believe the essence of “whiteness” is evil. Whites are “inhuman [expletive],” states a college professor, and blacks should let them “[expletive] die!”

Hard not to see where that thought leads.

Further, Whites must be excluded from “social justice” activities, which should involve only blacks or other “peoples of color”—separate dorms, separate facilities, separate meeting places. Notions as meritocracy and objectivity are merely the detritus of “white thinking,” and are “social constructs” that have no universal applicability.

In fact, diversity of thought is “white supremacist [expletive],” according to a conference attendee at a Critical Race Studies in Education Association conference in 2017, organized by Indiana University and Purdue. Throw in Plessy v. Ferguson (1896), and our survey of whites as the objective enemy is complete.

The temptation, of course, is to dismiss all this as old news, boring and familiar; we’ve been living with an insane academy for decades and the country is still functioning. So, one might ask, what else is new? Well, creeping totalitarianism in America, that’s what new.

These plagues of the mind are contaminating every major institution in America—especially the profession responsible for explaining to Americans who they are, what they’re doing, what is happening in their country, and what it all means.

Don Lemon’s laughable non-sequitur perhaps should win some sort of prize: “We have to stop demonizing people and realize the biggest terror threat in this country is white men, most of them radicalized to the right.” Thanks, Don and CNN, for that profound thought.

Many others do, especially if racism is equated with whiteness and whiteness is associated with voting for Trump, a connection made by otherwise sensible CNN contributor Kirsten Powers; perhaps she had a bad day when she uttered this thought.

Michael Moore, who seems to have nothing but bad days, looks forward to the time when white people are in the minority, since that will produce a “better America.”

Individuals on investigative reporter Matthew Vadum’s recently tabulated list of “Top 10 Black Racists,” similarly to Powers, associate whiteness with nearly every outrage in America’s history, the most recent of which is voting for Trump.

This is the problem, in terms of the facile assumption about the supposed ingrained racism of whites, transforming them into “objective enemies,” making it all the easier to revile these Americans and the person many of them voted for.

Consider, for instance, former ESPN host Jemele Hill calling Trump a white supremacist: “I thought I was saying water is wet,” she said. “I didn’t even think it was controversial … I was just talking casually with somebody. It wasn’t even original.”

Talking “casually” with someone about something that “wasn’t even original” exposed thoughts that, in her view, and presumably many others’, as well, didn’t seem shocking. That’s just the way things are.

Hill isn’t unique; years of indoctrination in totalitarian societies produced citizens who reasoned exactly as she did, assuming, for instance, that Americans were mongrels, their leader Franklin Roosevelt a Zionist puppet, and Jews the scourge of humanity. That’s just the way things are.

Is this hyperbole on steroids? Let’s hope so. Let’s also hope that several other “casual” lunatic notions infesting the academy don’t become additional tenets of Minitrue, such as efforts to expunge independent thought, excoriate American history, or celebrate barbaric cultures for the sake of “diversity” and “inclusion”—the list goes on.

If they do, then this “last best hope of Earth” will succumb to a new dark age, dutifully monitored by practitioners working for America’s Ministry of Truth.