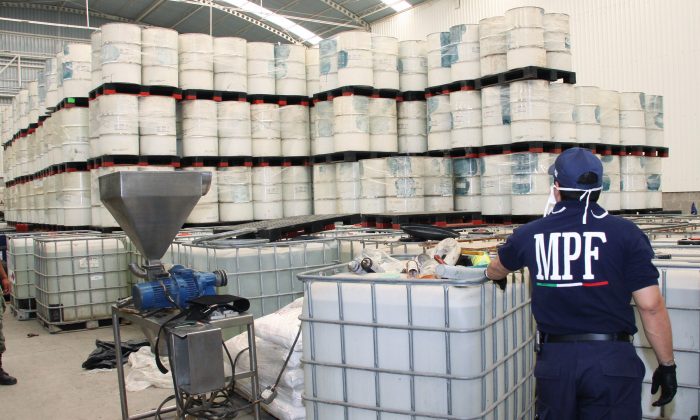 America’s Meth Crisis: Made in Mexico, Engineered in China

On June 27, an abandoned truck was discovered near San Antonio. Inside, dozens of migrants were found dead, having succumbed to the effects of extreme heat. Officers arrested three men less than 24 hours after discovering the abandoned truck.

One of those arrested was Homero Zamorano, the driver of the truck. According to one law enforcement officer, at the time of his arrest, Zamorano was high on meth. Sadly, Zamorano is not the only one high on meth. Across the United States, hundreds of thousands of people are using and abusing the soul-destroying drug.

Where does it come from? The answer to this question is as surprising as it is alarming.

When you picture a meth addict, what do you see? Rotting teeth, a thinning body, intense scratching, yellow teeth, paranoia, acne and sores, hallucinations, loss of appetite, and so on.

Methamphetamine, more commonly referred to as meth, is a dangerously addictive central nervous system stimulant. If asked to pick the meth consumption capital of the world, what countries spring to mind? Probably not the United States. But it should.

According to analysts at InSight Crime, an organization dedicated to shedding light on the effects of organized crime, the United States is meth country No. 1.

In recent years, according to authors at the Centers for Disease Control and Prevention, “methamphetamine availability and methamphetamine-related harms have been increasing in the United States.”

They certainly have. With more than 2 million users in the United States, the market for the drug is worth north of $40 billion. A little over a decade ago, that number was $13 billion. In the span of four years, between 2015 and 2019, deaths from meth overdoses almost tripled.

Why isn’t there more outrage? Why don’t we hear more about the meth crisis in the news?

In the words of Bryce Pardo, a policy researcher at the RAND Corporation, the “United States’ methamphetamine problem has been brewing, but we dropped the ball and took our eyes off it as a lot of the money, law enforcement, and healthcare pivoted to opioids.”

Although the drug can be easily made in small, “Breaking Bad”-like laboratories with easily accessible, over-the-counter ingredients, the vast majority of the meth in circulation comes from Mexico. But the ingredients for the drug come from China.

A Crisis Years in the Making

In 2016, the U.S.–China Economic and Security Review Commission (USCC) published a report describing how Mexican drug organizations had “replaced domestic producers as the main manufacturers and distributors of meth in the United States.”

While the cartels were responsible for producing the vast majority (roughly 90 percent) of the meth used in the United States, the report warned that 80 percent of the chemicals used came from China. Once the precursor chemicals were shipped to Mexico from China, they were “manufactured into meth” before being “transported across the southern border of the United States, and brought into southwestern states—Texas, Arizona, and California—before being shipped across the country.”

U.S. authorities discovered an underground smuggling tunnel on the California–Mexico border in May. Running the length of six football fields, this tunnel was used to funnel meth and fentanyl into a state that finds itself utterly ravaged by drug addiction and overdoses.

Less than a month after uncovering the tunnel, CBS News reported that the Mexican army uncovered 50 meth labs in Sinaloa state, the home of the country’s most notorious cartel. They seized 1,000 drums containing chemicals and more than 30 52-gallon cookers used to produce meth. If not for the work of the Mexican soldiers, the drugs would have ended up in the United States.

In recent years, helped by Chinese criminal actors, whose presence in Mexico continues to grow, Mexican drug cartels have turned to synthetic drugs such as meth and fentanyl to boost their profits. As demand for these drugs in the United States increases, expect the unholy alliance to grow even stronger. This is a serious problem that needs to be addressed. The meth crisis is an issue that transcends politics. It is a national crisis that should unite people on both sides of the political aisle.

In a report published last year, the National Institutes of Health warned that meth—once a drug used primarily by “middle-aged white people”—is now being used by an increasing number of black people. Moreover, meth use has become increasingly popular with 18- to 23-year-olds.

The Biden administration has been criticized heavily for the state of the border. When one acknowledges the flow of illegal drugs into the United States, the criticism is most definitely warranted. Nothing good comes from having such a porous border. Unless action is taken soon, more Americans will have their lives ruined by meth.