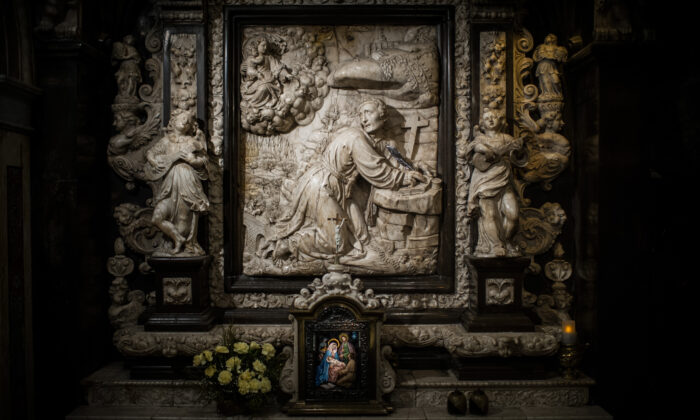 On a recent April evening, I made my way across the campus of Loyola University in Baltimore to address a group of Turning Point USA students on the topic “Reclaiming the Providence for America.” Along both sides of the pathways that crisscross the center of the campus were small flags representing the many genders that exist in the minds of many academics and their students in the nutty and destructive world of today’s radicalized academia.

Ignatius Loyola is one of three revered founders of the Jesuit movement, which was at the center of the Catholic counter-reformation in the 16th century, and his name is often found on educational institutions established by the Catholic Church. The Maryland university, the fourth such Catholic university in America, was founded by Jesuits in 1852. As I walked between the rows of weird flags, I had to wonder: Why is a Catholic university promoting the agenda of a movement bent on the destruction of faith and traditional families?

Loyola Maryland was one of several campuses where I, usually with a colleague, Victor Jessop, have been invited to speak. The young people we’ve met have told us that openly conservative students face a very hard time on most American campuses today. They belong to a very small minority willing to stand up for what they believe in since doing so subjects them to attacks by radical groups such as Antifa, the Young Democratic Socialists of America, and the Black Student Union, as well as hostile pressure from administrators and faculty members.

Given the extreme leftist bias of university faculty and administrators today, students have good reason to fear that their grades and graduation might be put in jeopardy if they speak up for their values.

Favorite epithets thrown at them by radical leftists are “racist,” “Nazi,” and “white supremacist.”

The students we met couldn’t have been further away from such hateful descriptions. Many but not all were Christians, but all believe in free speech.

Emily Talento, a field representative for Turning Point, told me that her group couldn’t find a single faculty member (out of 2,700) willing to sponsor their club at Stony Brook University in New York. (A sympathetic administrator eventually stepped in to help them set up the club.) Members of several conservative campus organizations have told me that finding a faculty member willing to sponsor a conservative campus organization is an almost universal problem in America’s academia today.

This is shocking. This country was founded by people who escaped religious oppression in Europe to be able to establish a life of liberty, “with a firm reliance on the protection of Divine providence.”

A Turning Point member at Stony Brook (26,000 students in all) told me she was just one of two openly conservative members on the 30-person rowing team. Because of harassment for their beliefs from other team members, they have learned to keep their views to themselves as much as possible.

At Rutgers, an overzealous flier advertising our event stirred a minor uproar. Several Turning Point members received threatening personal messages, and radical groups promised to demonstrate in opposition. The public event was canceled, and Victor and I delivered our messages online from an undisclosed location. So much for free speech!

The Turning Point field representative for Rutgers, Abbey Wigton, is a veteran of attacks by the left. Getting her start in conservative activism at age 16, she has had her literature table turned over, members from Antifa and other leftist groups screaming in her face with abusive language, and has suffered other attacks meant to intimidate and silence her. Not only from fellow students. Her worst experience was a faculty member pushing her against a tree and spitting in her face. She has only been getting stronger and more determined.

Merriam-Webster defines a university as “an institution of higher learning providing facilities for teaching and research and authorized to grant academic degrees.” Indeed, this is what universities should be. But in America today, few are.

Will Donahue is the chairman of California College Republicans (CCR), about to graduate from LMU in Los Angeles, where I spoke in March. He described the difficulties that CCR chapters face:

“The wars on our campuses are being fought on multiple fronts. We’re facing disengagement across the board because our college Republicans fear that they will be doxxed, penalized in classes, and ostracized from their organizations. Faculty, likewise, are unwilling in most instances to back conservative student organizations, especially College Republicans, because their livelihoods are on the line.

“Progressive biases have infected every facet of the education system, even our religious institutions. At our LMU chapter, the school has a black-only student space (re-segregation), allowed a Planned Parenthood fundraiser to occur on campus, removed a statue of Junipero Serra because the students complained he was a colonizer, have mandated a CRT [critical race theory] and diversity training core curriculum, allowed professors to punish students for not listing their pronouns and referring to God as ‘He,’ and placed female product dispensers in male restrooms.

“The blatant heresy that has been, and continues to be, displayed by the LMU administration is completely unacceptable, and we’re doing everything we can to fight back.”

Here’s another Catholic university in name only. Not only has it abandoned Christian values that were of fundamental importance to America’s founding and its role as champion of freedom in the world, but it’s also forcing students to embrace an atheistic, family-destroying, anti-American agenda.

Parents are being betrayed by these institutions.

To paraphrase one parent’s lament: On returning from the education you have purchased for them, the children you have raised to love God, family, and country come home as atheists believing they belong to a newly discovered gender and hating you as a racist or member of the despised patriarchy. Further, they believe their country is an imperialist empire that’s responsible for most of the world’s ills.

Indeed, in today’s America, academia is dominated by leftist faculties and administrations. Together, they create an environment that’s toxic for any person who has sincere faith, is committed to creating a traditional family, and who loves our country.

It takes guts to buck this oppressive pall of political correctness and cancel culture. Getting your degree as a student or securing a good teaching position or tenure as faculty depends on whether or not you appease the leftist mob with its groupthink.

Most American universities today are taking tens if not hundreds of thousands of dollars from parents to educate their children, but are completely failing to fulfill their fundamental responsibility to provide an environment in which the students in their care can enjoy honest and open discourse that embraces all points of view.

The leftist ideologies dominating academia today (Marxism and the Neo-Marxism of the Frankfurt School—think Herbert Marcuse, Wilhelm Reich—and Postmodernism—think Michel Foucault and Jacques Derrida) have been responsible for the destruction of faith- and justice-based societies, and in the last century, the death of tens of millions at the hands of totalitarian regimes.

It’s time to take back our institutions of learning from the soulless and heartless leftists who are destroying our children. The brave young people standing up for liberty and justice on campuses across the country deserve the support of all good people.

Speaking for students under assault, Donahue cries out: “We need help!”

We must listen and we must act. Parents must get universities (and all other leftist educational institutions) to change course, or consider ending payment for education that’s destroying their children. There are some alternatives (such as Hillsdale), and many more will have to be created if the established institutions remain on a destructive course.

Thomas Cromwell
Follow
Thomas Cromwell spent 25 years in the Middle East where he published and edited The Middle East Times and several other publications. He recently published a book on the current crisis in our civilization, West and East, brought on by the spread of Marxist and Neo-Marxist ideology and the rise of the Chinese Communist Party, “The Triumph of Good: Cain, Abel and the End of Marxism.”