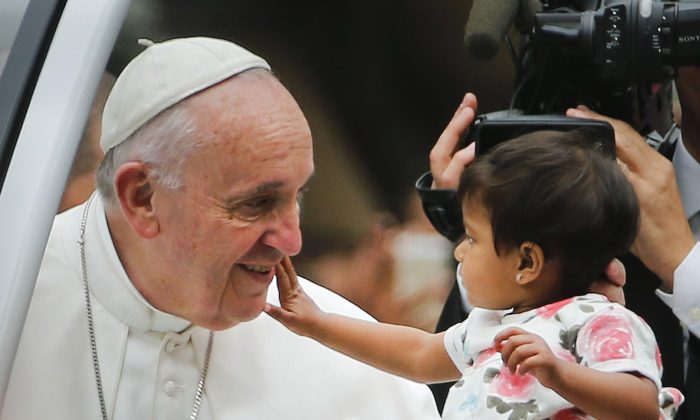 An unidentified child, who was carried out from the crowd to meet Pope Francis, reaches out to touch the Pontiff's face during a parade on his way to celebrate Sunday Mass on the Benjamin Franklin Parkway in Philadelphia, on Sept. 27, 2015. (Pablo Martinez Monsivais/AP)
Opinion

These lessons serve as a clarion call to renew individuals, families, communities, and the nation.

There is no one at this present time anywhere on the planet, other than Pope Francis, exemplifying quintessential leadership principles to believers and nonbelievers as well.

The heart of his charismatic ability to transform is a sincere compassion that has humility as its foundation.

The humility of the pope is dramatically expressed through his concern especially to the poor, destitute, and suffering.

America was carefully observing the words and actions of Pope Francis during his visit.

His words were efficacious and warmly received because his actions boldly proclaim humility, the essential principle of an effective leader.

Although Pope Francis has the opportunity to live in royalty at the Vatican, he humbly declines living in the opulent papal apartment at the Apostolic Palace and lives in a simple guesthouse suite.

As the first pope in 110 years not to live in the papal apartments, he also takes his meals in the common dining room after morning services with Vatican employees.

In America, although offered to dine with leaders of Congress, he chose a lunch with the homeless of the nation’s capital, a gesture of profound humility.

The humility of the pope is dramatically expressed through his concern especially to the poor, destitute, and suffering.

As observed throughout his visit, his chosen method of travel was a Fiat and open pope mobile rather than a bulletproof limousine. He continually searched for babies to hold, the needy to bless, and the sick to comfort.

The pope’s decision to stop his motorcade to receive a letter from a 5-year-old pleading for assistance to prevent her parent’s deportation indicates his sensitivity.

Although unreasonable to expect American leaders to negate security measures like the pope, the holy father’s personification of humility, especially his compassion toward the downtrodden, is worthy of emulation.

Eloquence only has the power to influence an audience when it is empowered by the virtuous lifestyle of the speaker.

Abraham Lincoln and Dr. Martin Luther King Jr. exemplified this lifestyle, and it served as the catalyst for their persuasive eloquence.

Pope Francis honored both of these great Americans during his address to Congress, but most importantly, he honored our icons through his humility. His eloquence was empowered by his humility as he addressed critical issues of our time including the following:

Immigration— “We, the people of this continent, are not fearful of foreigners, because most of us once were foreigners.”

Refugee Crisis— “We must not be taken aback by their numbers, but rather view them as persons, seeing their faces and listening to their stories, trying to respond as best we can to their situation.”

Climate Change— “The poorest are those who suffer most from such offenses, for three serious reasons: they are cast off by society, forced to live off what is discarded, and suffer unjustly from the abuse of the environment. They are part of today’s widespread and quietly growing ‘culture of waste.'”

Drug Trafficking— “I would mention another kind of conflict, which is not always so open, yet is silently killing millions of people. Another kind of war, experienced by many of our societies as a result of the narcotics trade. A war, which is taken for granted and poorly fought. Drug trafficking is, by its very nature, accompanied by trafficking in persons, money laundering, the arms trade, child exploitation, and other forms of corruption.”

Prison Reform— “It is painful when we see prison systems, which are not concerned to care for wounds, to soothe pain, to offer new possibilities.”

Sexual Abuse Scandal— “It continues to overwhelm me with shame that the people who were charged with taking care of these tender ones violated their trust and caused them tremendous pain.”

Altruism— “Now is the time for courageous actions and strategies, aimed at implementing a ‘culture of care’ and ‘an integrated approach to combating poverty, restoring dignity to the excluded, and at the same time protecting nature.”

Pope Francis has returned to Rome, but his words and actions must remain with us, inspiring Americans to reawaken the nation.

When character, sincerity, and humility serve as our core values, the destiny of America’s moral decency will be reignited.