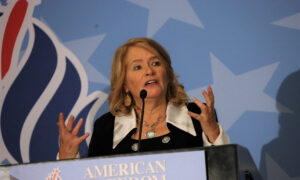 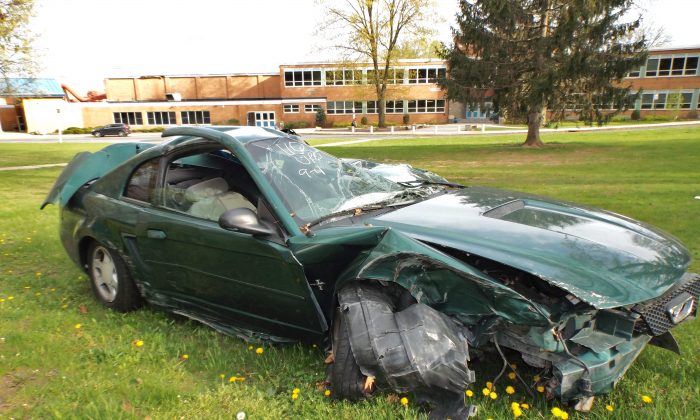 Mustang wreck on the lawn at the entrance of Millburn High School, N.J., reminding students during prom season of the dangers of driving under the influence, on May 5, 2014. (Vincent J. Bove)
News

Although prom night should be an enchanting memory lasting a lifetime, for many it becomes a night of trauma and loss of life.

Despite America’s under-the-influence culture, being high on prom night is never an acceptable rite of passage, especially when combined with driving—a toxic combination.

As I drove past Millburn High School in New Jersey this week, there was a sobering reminder of a prom night tragedy. A wrecked Mustang sedan was on the lawn at the main entrance of school property. School officials hope it will remind students and parents of the serious repercussion of irresponsibility.

Similar wrecked vehicle exhibits can be observed at schools nationwide during prom season, when lives are lost due to our society’s high-seeking absurdity.

Aside from grim news reports of vehicle fatalities, there are other prom-season afflictions, including date rape, sexual assaults, unintended pregnancies, or STDs.

The Centers for Disease Control and Prevention promotes prom safety including:

From Tragedy to DWI Prevention Champion

On March 25, I attended the 25th Anniversary of Life Dinner in honor of Steven Benvenisti, Esq. in Washington Township, N.J. The event, attended by 300 friends, family and students, commemorated Benvenisti’s miraculous escape from death after being struck as a pedestrian by a drunk driver while he was on spring break as a college student.

“Six weeks before graduation, I went to Daytona Beach, Florida with my fraternity brothers for Spring Break. One night while we were walking, a repeat offender drunk driver lost control of his vehicle and crashed into my legs, with my face smashing through the outside windshield and my body being thrown 70 feet. I sustained catastrophic injuries including:

“My family was asked permission for organ donation because the severe brain damage, brain bleeding and swelling, meant survival was not likely and if I did survive, that I would be completely and totally disabled.”

Steven dispelled all odds through sheer determination and went on to graduate from law school, raise a family, and become a civil trial attorney certified by the Supreme Court of New Jersey.

He shows his appreciation for life by representing personal injury victims and educating students on impaired driving dangers and traumatic brain injury. Steven has addressed tens of thousands of students during the last 25 years, turning his adversity to triumph by empowering them to say “no” to drinking and driving.

Tragic prom night headlines are rampant due to America’s under-the-influence society. But these tragedies are preventable by empowering youth to say “no” and encouraging them to lives of character through example, vigilance, and guidance.

Centers for Disease Prevention and Control

Spring Break: A True Story of Hope and Determination (ActivatingAwarenessGroups.org)