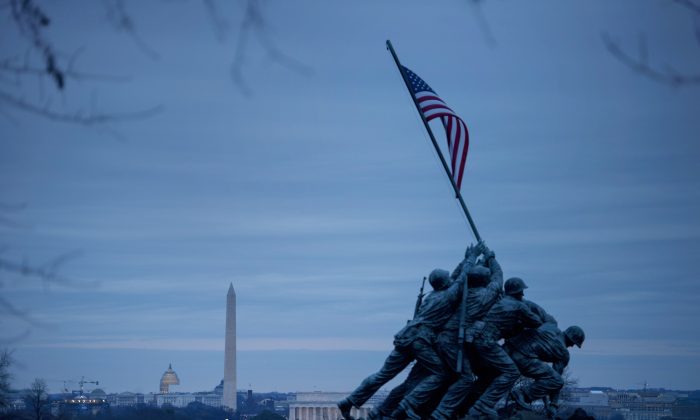 The American flag is the symbol of our nation, deserving of reverence, honor, and dignity.

As immortalized by the iconic flag-raising by U.S. Marines during the battle of Iwo Jima, our flag is the rallying point for America’s patriotism. Iwo Jima’s flag-raising gave America hope, a counterpoint to the heart-wrenching sinking of our ships at Pearl Harbor.

As documented in “Flags of Our Fathers” by James Bradley, more medals for action on Iwo Jima were awarded than any battle in American history. It is a profound expression of when “Uncommon Valor Was A Common Virtue,” which is the inscription on the west side of the Marine Corps War Memorial.

Iwo Jima, inseparable from the sacrosanct moment of the flag raising, stands as America’s most heroic battle.

At Iwo Jima, the flag was raised forever proclaiming the greatness, courage, and character of America. Our flag, honored at Iwo Jima, must be eternally revered in every community, school, workplace, home, police department, military base, and heart of all privileged to call America home.

The recent scandal at the University of California–Irvine, by the student government to ban displaying America’s flag from a lobby is dysfunctional and disappointing.

The student council approved a resolution prompting removal of America’s sacred symbol from a lobby wall. The resolution cited 25 reasons for the ban including the possibility of the flag symbolizing America’s “exceptionalism and superiority.”

The resolution stated, “Freedom of speech, in a space that aims to be as inclusive as possible, can be interpreted as hate speech.”

One could only imagine if any of those responsible for this reprehensible dishonoring of America’s sacred symbol would have had the courage to endure the sacrifices made at Iwo Jima. Or would any of those supporting the ban have ever honored the flag as heroically done countless times throughout America’s history?

One wonders where the lack of wisdom, understanding, fortitude, or patriotic influence was lost on those who supported this flag banning, as in my opinion it is clearly dysfunctional. Perhaps a deficiency took place somewhere during formational years by the family, community, school, or media.

The shameful contempt for our flag to create “a culturally inclusive space” was delusional. The fact is irrefutable for, if one truly understands the flag, diversity, unity, bravery, freedom, liberty, and human rights are honored, upheld, and protected whenever our flag is honored.

Throughout my entire life, respect, honor, and dignity for America, symbolized by our flag, has been instilled and continuously cultivated.

Honoring the flag took place in my earliest years when I proudly raised the flag on the home of my parents and grandparents. This respect continued throughout college and post-graduate studies as I always took the initiative to display a large American flag from the room of wherever I lived. Honoring the flag remains with me always, even as I write this column, with the flag proudly displayed prominently at my home. It is a personal reminder of devotion to country and a testimony to my community of the courage, compassion, and character of America.

Respect for America through our flag is a sacred privilege and responsibility. This respect is solemnly proclaimed in our pledge of allegiance, deserving of luminosity within our souls.

May honor for America’s flag forever live in the hearts of all who love her and are truly dedicated to the reawakening of the nation.