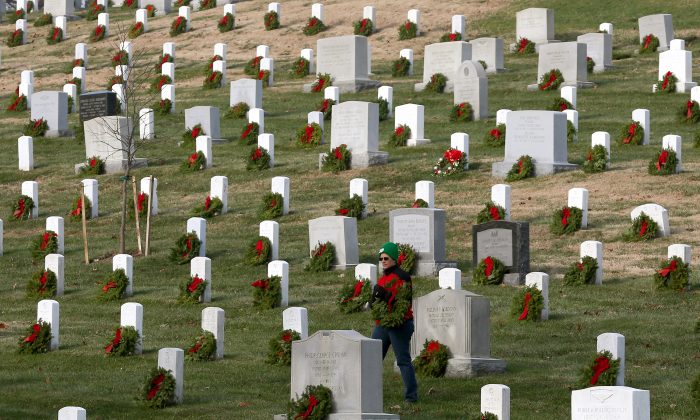 A volunteer looks for a grave to place a wreath on during the National Wreaths Across America Day at Arlington National Cemetery, in Arlington, Virginia in Dec. 13, 2014. (Mark Wilson/Getty Images)
Viewpoints

Each December, America’s profound respect, admiration, and honor for our fallen military is expressed through National Wreaths Across America Day.

The event is conducted through the organization Wreaths Across America whose mission is to “Remember, Honor, and Teach.”  The mission is carried out by coordinating wreath-laying ceremonies at Arlington National Cemetery, as well as at over 1,200 additional locations in all 50 states, and at sea, and abroad.

The words are from a song written by Rick Charette titled “I’m an American.”  A rendition was performed by the Kennebunk Elementary School Children’s Chorus in Maine, during the 2016 Annual Wreath Escort to Arlington National Cemetery.

The children’s performance ignited patriotism in the hearts of their audience.  As the entire audience joined the children in song, all cheered, and were struck with awe at America.  The song is now continually song at Wreaths Across America events.

The origins of Wreaths Across America began in 1992 when Morrill Worchester, a wreath-maker from Maine had 5,000 extra holiday wreaths.

Worchester decided to use these wreaths as an expression of gratitude for fallen military personnel whose sacrifices gave him the freedom to be an American.

Twenty-five years later, on Dec. 16, 2017, Worchester’s patriotism has been multiplied. According to the Wreaths Across America site, there are now: “1,422 participating locations nationwide, grateful Americans in every state placed more than 1,565,000 remembrance wreaths. At Arlington National Cemetery specifically, 244,700 wreaths (one for each marker there) were placed by more than 75,000 volunteers, the largest crowd to ever participate there. Nearly 500 truckloads of wreaths were transported across the country through a network of hundreds of volunteer drivers, donated trucking and diesel, and countless hours of dedicated volunteers committed to the mission to Remember, Honor and Teach.”

The 2017 wreath laying at Arlington National Cemetery began with the arrival of a “mile-long convoy of ceremonial vehicles, including tractor-trailers, buses, and cars carrying wreaths, veterans, Gold Star and Blue Star Families, and supporters.”

Our respect must be expressed not only at Arlington, but on hallowed ground wherever America’s fallen are laid to rest.  Most importantly, the honor must forever burn in the hearts, minds, and soul of every person privileged to call America home.

America is the “land of the free, and home of the brave” only because our sacred freedom, liberty, and democracy has been protected and defended by our armed forces.

Our nation must forever remember their sacrifices and be fully committed to honoring their legacy.  This honor deserves a full-force commitment throughout all of society, but especially through character education initiatives in our schools and campuses.  This is critical to preserving and igniting the hearts of patriotism for America’s future.

As wreaths on America’s hallowed resting places remind us to honor our fallen, we must also pause to remember those laid to rest on distant shores.

According to the American Battle Monuments Commission, there are 26 permanent military cemeteries and 29 federal memorials located throughout the world.

These cemeteries and memorials, most of which commemorate sacrifices of World War I and World War II, demand a mystical remembrance in the heart of every American.  The heartbeat of each American must always beat with respect, reverence, and honor.

America must also eternally honor the clarion call of Lincoln at Gettysburg.  His words must inspire respect for all who have offered the ultimate sacrifice for our nation:

Finally, may we forever be inspired by the hearts of children singing these words from “I’m an American” on a day at Kennebunk Elementary School in Maine:

I love my country. I love my land.

With you and me together, we each play a part.

We can make a difference with love in our hearts.

We are shining in the sun.

“With liberty and justice for all.

I hold the world’s future here in my hands.

Gonna sing and shout it! It’s great to be free.

Every single person has dignity.

I promise that I will do what I can.

I’ll stand up for freedom. Live my life without fear

Going to make a better world, I know we’ll persevere.”