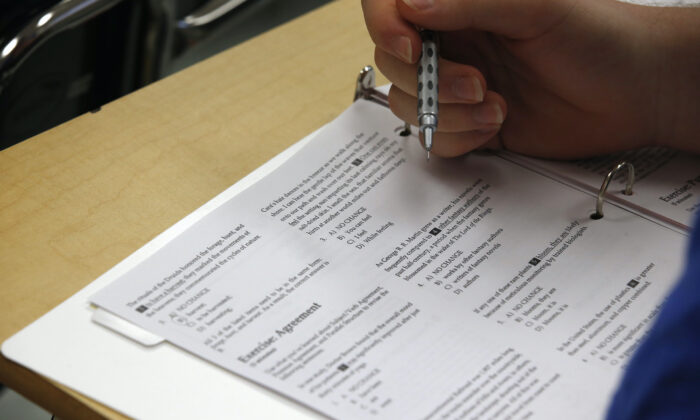 If he can successfully cheat his way through college, Jim plans to become a doctor.

Jim, who chose to be anonymous to avoid academic consequences, attends a major university in Canada with about 26,000 undergraduate students. He says he’s always cheated in school, but that after he arrived on the college campus, his cheating rose to new levels.

“I’ve essentially been cheating since like the beginning of university, I guess,” he said. “It all started when COVID-19 started, so like when classes went online.”

Jim considers himself a good person, he said. But he doesn’t feel guilty about cheating.

“I typically do the right thing. I’m pretty active in volunteering,’” he said. “I would say I kind of have almost a ‘cheating personality,’ like I guess I don’t really care about the consequences that much, and I’m willing to lie.”

For Jim, cheating is a way to guarantee good grades, he said. In high school, before he started cheating seriously, he got grades in the mid- to high-70s, he said. But cheating has boosted his grades to the mid-80s or higher.

The classes he has cheated in include statistics, calculus, linear algebra, physiology, introductory biology, genetics, cell biology, and vertebrae anatomy, he said.

With just a few simple strategies such as using a fake email on websites that provide answers, using the bathroom during tests so he can look at notes, and paying other people to write his essays online, Jim says he’s never come close to being caught. The COVID-19 pandemic made it easier to cheat than ever as exams moved online.

Even so, Jim says he often feels afraid of getting caught because of how it would affect his life.

Jim said he has a passion for gastrointestinal medicine. He wants to specialize in it and treat diseases ranging from colon cancer to irritable bowel syndrome. If his cheating leaves him unprepared for a real-world job, Jim has a backup plan.

“I think I can just get a much lower specialty, like maybe family medicine or something like that, and not become a subspecialist,” he said.

As college has increasingly gone online, students like Jim live in a world where cheating is a business. Companies worth billions allow students to pay for answers that they often use to cheat on tests, homework, and projects.

The internet is often the medium that matches cheaters with experts willing to sell answers for money. One subreddit with 16,000 members, r/hwforcash, is dedicated to cheating for money. Ironically, the subreddit’s notes warn of scammers who blackmail cheating students or fail to provide correct cheating answers. The cheaters may easily become the cheated.

On r/hwforcash, a 1,000-word essay can cost $50, tests often cost around $100, and smaller assignments from $25 to $50. The more difficult or more important the assignment, the higher the price.

While figures on the prevalence of cheating are hard to find, a survey by education company Wiley found that 51 percent of college students say it’s easier to cheat in online classes.

Other studies suggest that cheating nearly doubles in online tests.

“We’ve seen a dramatic and consistent increase in attempts to cheat on the tests we monitor. That’s clear to see in our data,” said Jarrod Morgan, CEO of Meazure Learning, a proctoring service.

Morgan said the rise in cheating seems to be correlated with the increase in online classes.

“Cheating is a serious problem. Not only does it put unprepared people in jobs such as nurses and accountants, but cheating also undermines the value of a degree and the value of an education,” he said.

Statistics from schools that have released their data publicly show that cheating has increased significantly during the pandemic.

For colleges, widespread cheating is as destructive as it is frustrating. A student’s diploma should indicate mastered skills; a cheater’s diploma proves only mastery of cheating.

According to the Educational Testing Service, which develops, administers, and scores tests, cheating tends to start in high school or younger.

According to Luke, a high school teacher who chose to be anonymous because his school discourages speaking with media, the cheating in his 10th-grade classroom is disappointingly high. This year, he caught about 40 kids cheating, out of the 100 he teaches.

Luke takes cheating very seriously, he said. As a chemistry teacher, he believes that if his kids don’t learn skills well in school, they could endanger other people.

“I don’t want to let anybody go forward in the STEM field with that attitude toward lying to further themselves,” he said, “because it’s dangerous.”

Whatever the reason, the student cheating takes its toll on Luke, who says he tries his best to help students succeed.

“I’m trying to meet students wherever they’re at, and they’re just not doing the same,” he said.

The constant fight against cheating drains Luke and other teachers of time, energy, and resources, he said. Every cheating safeguard he creates takes away time he could otherwise spend on helping students or designing lessons.

“I think a lot of people are just burned out,” he said.

Luke uses strategies such as replacing every lower-case letter “L” with an uppercase “I” so when cheaters look up text online, they get no results. These strategies catch cheaters, but the cheating continues.

“Not every teacher has the energy to do that,” he said.

Luke’s description of cheating sometimes suggests that it’s a way students depend on technology for answers rather than thinking for themselves.

For instance, his students are regularly amazed that he can do math in his head rather than using a calculator, he said. To them, cheating by using the internet is just another way to solve problems.

“Students tend to be in the habit of copying and not thinking if something makes sense,” he said.

“While my school does encourage and require zeros for cheating, I am not allowed to give grades lower than a 55 for the first two quarters of the year,” he said.

Patrick Capriola, editor of education site Strategies for Parents, said that cheating has increased because school systems punish it less and value grades over long-term learning.

“I have seen more students cheating in school now than when I began my career and certainly than when I was young. I see the explanation as being quite simple. Cheating is punished less often and less severely than it used to be,” he said.

“There is significant emphasis on getting a good grade, with less care for teaching/learning a concept in a way that will stay with the student for the long run.”