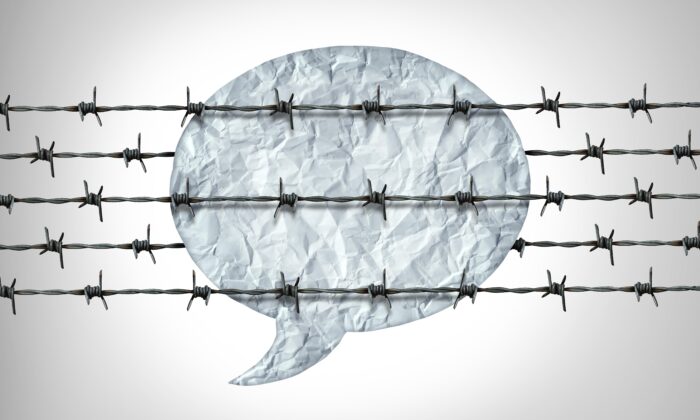 A censorship consortium working with the Department of Homeland Security targeted The Epoch Times and other independent media during the 2020 election cycle.

According to a forthcoming report from the Foundation for Freedom Online (FFO), the government agency outsourced censorship to private sector partners, including federally funded universities, that pressured social media platforms to shut down press outlets including Fox News, the New York Post, the Washington Times, Breitbart, Just the News, and Newsmax, for critical news and analysis concerning the integrity of the 2020 election.

Further, according to FFO Executive Director Mike Benz, after Joe Biden’s November 2020 victory, the government rewarded its private-sector censorship partners with millions of U.S. taxpayer dollars in federal grants. The same consortium is already active in shaping the 2022 election cycle. The DHS-backed consortium, Benz said, has “systematized the censorship in a way that a free society cannot survive if this thing does.”

I spoke with Benz for the latest episode of “Over the Target Live.” A former State Department official in the Trump administration, he says his organization is fighting “to restore the promise of a free and open internet.”

The internet is “the linchpin of a free society. This has been a staple of United States foreign policy for decades,” Benz said. “A country that did not have a free and open internet was considered effectively perpetuating a human rights violation.”

That was the consensus view, until 2016 when two pivotal events put the liberal democratic order’s professed convictions to the test—the UK’s Brexit referendum and the election of Donald Trump. Both signaled that voters rejected the trans-Atlantic political establishment, and that made the establishment mad.

“Due to the outcomes of democratic processes,” Benz said, “various institutions decided that there was a little bit too much democracy happening. And so to save democracy, they needed to effectively curtail the capacity to use the internet for democratic participation. … What we’re living in right now is essentially the revenge of the gatekeepers.”

Using open-source material, Benz’s investigation pins the origins of the censorship campaign to early summer of 2020. It was run out of a DHS sub-agency, the Cybersecurity and Infrastructure Security Agency (CISA), which was established, Benz said, “to protect real physical infrastructure, servers, [to defend against] malware threats, hacking threats. … [But] cybersecurity became cyber censorship.”

CISA’s first director was Chris Krebs, who would later famously declare the 2020 election to be the most secure in election history. In the run-up to the November vote, CISA censored anyone who suggested it wouldn’t be.

But, Benz said, DHS “knew that they could not directly censor social media,” so it deputized private-sector partners to censor First Amendment-protected speech.

The avatar DHS partnered with to disguise its heavy-handed election interference consisted of Stanford University’s Internet Observatory; the University of Washington’s Center for an Informed Public; the Digital Forensics Research Lab attached to the Washington think-tank the Atlantic Council; and Graphika, a private analytics firm staffed by former intelligence and defense officials that is funded in part by U.S. government agencies.

EIP used a “tiered system about what to refer to censorship,” Benz said, because “they wanted to manage what they called the martyr process.” They tried to avoid censoring tweets that weren’t trending because that would cross the consortium’s purpose by drawing attention to the post. “When somebody gets censored,” he said, “often there’s an uptick in salience and visibility, because people are outraged over the censorship.”

Perhaps most significantly, EIP was tasked to manage the public’s response to what it called the Red Mirage-Blue Shift phenomenon—meaning, an apparent Trump victory on election night and the reality of a Joe Biden victory the day after. The fact that this is precisely what happened is evidence of either the censorship consortium’s remarkable predictive powers or its role in a conspiracy to fix the 2020 election.

After Biden’s election, the government paid off its private sector cut-outs. The two university centers shared a $3 million grant, Graphika won $5 million, and the Atlantic Council’s unit got at least $2 million in grants and government contracts.

For 2022, Benz said, the EIP is focused on “voter ID issues.” But the censorship consortium’s ambitions go far beyond elections. According to Benz, the government’s private-sector enforcers have begun asking themselves: “How can we scale this model? Because it was really easy to get the social media companies to censor election posts, because they were afraid of us busting up them with antitrust regulation around election issues. But can we apply this to climate change, can we apply this to immigration issues?”

The government has acquired a taste for censorship and its appetite is only growing.

“But the Ministry of Truth was set up in the Department of Homeland Security really between 2019 and 2020,” he said. “There are so many Ministry of Truth initiatives, personnel, outside points of contact … that the Ministries of Truth are getting on top of each other and it’s clunky and ineffective, because there’s so many different policies to navigate. … The governance board was just designed to be a dull, boring bureaucratic manager level of the Ministry of Truth operations that are already there.”