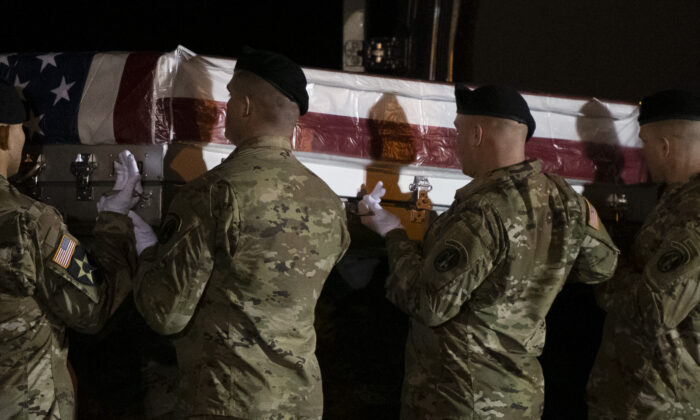 America’s Army Betrayed in Afghanistan by Presidents and Generals

Sept. 11, 2001, was a dark day in American history, with nearly 3,000 people killed in the attacks on the World Trade Center and the Pentagon, and a sizable chunk of lower Manhattan reduced to smoking rubble.

Within weeks, the United States rallied, drove the Islamic Taliban in Afghanistan from power, and sent Osama bin Laden and his warriors scattering for safety across the globe, there to meet death at the hands of U.S. special forces wherever and whenever they’ve been found. By December, the Afghan War was effectively over.

And yet … here we are, in February 2020, and the “war” is still dragging on, and still claiming young American lives. Case in point: The deaths on Feb. 8 by “friendly fire” in provincial Nangarhar of two men from the southwest: Staff Sgt. Javier Gutierrez, of San Antonio, Texas, and Staff Sgt. Antonio Rodriguez, of Las Cruces, New Mexico, each 28 years old, and both murdered by an Afghan sergeant—armed and trained by U.S. forces—with the single name of Jawed.

They are just two of some 150 brave U.S. soldiers killed in “green on blue” violence by our erstwhile Afghan “allies.” Gutierrez, a Green Beret, was newly in the country; Rodriguez, an Army Ranger, was on his 10th tour of duty. Both were members of the Army’s 7th Special Forces Group.

Their needless deaths came as President Donald Trump once again gave the green light for “peace” talks with the Taliban—peace talks that come nearly 19 years after the start of what is now, shamefully, the longest war in American history, as well as one of our greatest military disgraces.

Under the simple-minded President George W. Bush and the feckless President Barack Obama, as well as the peacetime generals whose conduct of the war will live in infamy, the U.S. military has been subjected to the greatest humiliation in its long and storied history.

It should have been asked to finish—decisively, quickly, and definitively, just as British Gen. Herbert Kitchener crushed the Mahdist forces at Omdurman in 1898—the conflict that began on 9/11; instead it has been turned into an instrument of “social justice,” a meals-on-wheels, three-cups-of-tea aggregation of sitting ducks, one held in open, murderous contempt by an armed rabble of primitive, superstitious, dog-hating goatherds.

Great powers can survive many things—there is a great deal of ruin in a nation, as the 18th-century Scottish economist and philosopher Adam Smith once observed—but they cannot survive derision or a lack of respect from their existential enemies.

In military conflicts, the will to win is dispositive. In 216 B.C., the army of the Roman Republic suffered the worst beating in its history at the hands of Hannibal, with upwards of 50,000 men or more slaughtered. And yet, with their legions in ruins, one-fifth of their male population over 17 killed, and Rome itself threatened with annihilation, the Romans rallied under Scipio Africanus and, just 12 years later, defeated Hannibal at the Battle of Zama, ending the Second Punic War. By 146 B.C., when the Third Punic War ended, Carthage was razed, and vanished into history. End of problem.

Militarily, it’s hard to think of a comparable situation to America’s at the moment. Perhaps our own Revolutionary War is one—a fight in which the Americans lost most of the battles against a much-distracted and geographically remote opponent with far more pressing issues of statecraft on its mind to bother crushing the upstart colonials, whose capacity and will to fight they had seriously underestimated.

Yet no one would seriously argue the Afghans under the Taliban have any desire to become a representative democracy, no matter how many times Bush told us (as he did in his naïve Second Inaugural Address in 2005, written by Michael Gerson), that “freedom is the permanent hope of mankind, the hunger in dark places, the longing of the soul” and that “history has an ebb and flow of justice, but history also has a visible direction, set by liberty and the Author of Liberty.”

As neutral, non-ebbing history amply illustrates, Islam’s definition of “peace” and “freedom” is far different from that of the Scottish Enlightenment, and only someone historically illiterate could possibly think otherwise.

And yet, under Bush, and then under Obama, young men like Gutierrez and Rodriguez have continued to die for the fiction that the Afghans, along with most of the rest of the Islamic “ummah,” really wants “freedom,” when in fact the religion has always been quite open about its theological and geopolitical goals: universal submission to the will of its god, Allah.

Our soldiers have died because there was not a single general—not David Petraeus, not Stanley McChrystal, not James Mattis—who demanded of the president, on pain of instant resignation, that we win.

None of them was a general worthy of the name; instead they were small-minded, tactical obsessives concerned with hitting their metrics rather than winning. As Thomas Ricks pointed out in a 2012 piece in The Atlantic excoriating the U.S. generalship of the period: “A private who loses his rifle is now punished more than a general who loses his part of a war. In the wars of the past decade, hundreds of Army generals were deployed to the field, and the available evidence indicates that not one was relieved by the military brass for combat ineffectiveness.”

This is simply unacceptable. During the American Civil War, Abraham Lincoln churned through general after general (including the parade-ground popinjay, George McClellan, who would run against him as a Democrat in the election of 1864) until he finally found Ulysses S. Grant: “He fights,” explained Lincoln.

In World War II, generals were routinely cashiered, often after just a few months of futility or failure of nerve. This weeded out the civilian-era desk jockeys and rapidly replaced them with warfighters who had cut their teeth in combat at Normandy and were eager to go all the way to Berlin to finish the job.

Since Korea, and certainly since Vietnam, the United States hasn’t wanted to finish the job. Vietnam may have been a war of choice, but the war that began on Sept. 11 was not. It was and remains a war for cultural survival, with a clear, largely nongovernmental enemy that has been dedicated to the destruction of the Judeo-Christian West since the seventh century.

That this particular battle should have been finished by Christmas 2001 will forever redound to America’s discredit. A defeat in the larger conflict will mean America, and the West’s, demise.