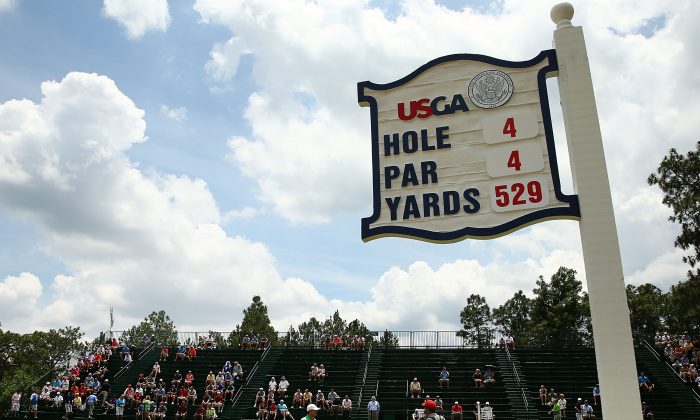 A general view of Pinehurst's fourth hole at prior to the start of the U.S. Open. (Streeter Lecka/Getty Images)
Golf

The U.S. is blessed with an array of outstanding courses but only one can legitimately lay claim to being the St. Andrews of American golf—Pinehurst.

Located in the sand hills of North Carolina, Pinehurst had the good fortune in linking together several elements—a world class golf destination in tandem with the embodiment of a community “village”: Americana to the core with good neighbor rapport linked to renowned southern charm.

This week Pinehurst is again the center point of the global golf community hosting its 3rd U.S. Men’s Open Championship in 15 years—contested on the iconic #2 Course.

In straightforward terms the staging of US Opens—until recent times—was the domain of elite private clubs centered in major metropolitan areas. With the inclusion of Pebble Beach in 1972 the USGA took the host role one step further going to a seasonal club—Shinnecock Hills in eastern Long Island, NY in 1986. With that success it became evident other locations could be included for America’s premier golf championship.

There was also the belief that sites in the southeastern area of America were impacted by high heat and humidity thereby robbing putting surfaces of ideal firm and fast conditions requiring excessive watering to keep tightly-cropped grasses alive. Up through the 1999 U.S. Open at Pinehurst #2 the USGA staged only one Men’s Open site south of Washington, D.C. and east of the Mississippi River—Atlanta Athletic Club in 1976.

Pinehurst #2 had long been a major venue hosting the 1951 Ryder Cup Matches and was the long-time host of the North & South Open—a prime stop on the fledging PGA Tour for many years before ending in 1952. Other North & South amateur events are played annually and in various categories. The PGA Tour made its presence known in the 70’s, 80’s, and early 90’s but the fall-scheduled events conflicted with collegiate football causing limited on-site audiences and nervous sponsors seeking more for their dollar contribution.

There were also turf issues to consider. The ideal time to play Pinehurst #2 is in the spring and fall periods—away from the intensity of high temperatures, humidity and drenching thunderstorms during summer months.

The push for Pinehurst #2 to be considered for a U.S. Open took time to build.”I’ve always thought Pinehurst #2 to be my favorite golf course from a design standpoint,” said 18-time major winner Jack Nicklaus, in the well-documented Lee Pace book, “The Spirit of Pinehurst.”

Pinehurst #2 is the handiwork of acclaimed architect Donald Ross—responsible for designing or redesigning approximately 400 courses from 1900-1948 and laying the foundation for America’s growing passion of the game post World War II.

Ross, born in Dornoch, Scotland, developed his keen eye for design from playing the likes of Royal Dornoch—one of the world’s premier courses. During his apprenticeship Ross had the good fortune in coming under the tutelage of Old Tom Morris at St. Andrews.

In 1899, Ross came to America and smartly networked himself in being the point man for golf development in the sand hills region of North Carolina through his relationship with well-heeled James W. Tufts. A Massachusetts “Yankee” Tufts envisioned a seasonal getaway from the harsh winters of the Northeast USA.

In 1895 Pinehurst came into being but golf was still in the shadows.

Ross completed #2 as an 18-hole course in 1907—amazingly with sand/clay greens. The final routing was only completed in 1935 with the course playing anywhere from 6,200 to 6,900 yards with a switch to bermuda-grass greens.

Having lost the design job for Augusta National Golf Club to Alister Mackenzie in the early 30’s, Ross was determined to elevate Pinehurst #2 as the ultimate strategic golf course in the southeast. Until his death in 1948 Ross continuously tinkered with the layout in a number of ways.

In 1902, James Tufts died and his son Leonard assumed command. But after the return of his son Richard from the Navy during World War I, the helm of the ship gradually became his responsibility and joy—one the Tufts family maintained until 1970 when they sold to Diamondhead Corporation. The vision the Tufts imbued for Pinehurst—with utter devotion—was a celebration of life and much more than a bottom line proposition. For Diamondhead, Pinehurst was a means to capitalize and churn out housing—using the name Pinehurst to foster more and more. Eventually the fascinating charm the Tufts had carefully cultivated was jettisoned.

During that period the nature of the Ross designs—most notably #2—was altered with manicured areas placed at nearly all locations. The natural sand pines and scrub were eliminated—the course was seen as a means to sell extensive real estate development ideas. The very nature of the “Village of Pinehurst” became a vast marketing ploy throwing out the Tufts reality of a “less is more” oasis sheltered from the drumbeat and clutter of ordinary life.

When Purcell sold in 1982—Diamondhead changed its parent name a few years after the purchase to a consortium of banks—the very reality of what Pinehurst was originally was much in doubt. In 1984—for a bargain price of $15 million—ownership switched to a more golf-centric company—Club Corporation of America (ClubCorp) based in Dallas. ClubCorp turned around the ailing property. The word on the golf street was quite emphatic—Pinehurst was intent on returning to the forefront—thanks in large part to the steadfast devotion shown by Chairman Robert Dedman, Sr. Dedman assembled a first rate team to carry out his vision in hiring President and CEO Pat Corso and eventually Director of Golf Operations Don Padgett.

At first glance, Pinehurst #2 doesn’t present an overwhelming “wow” factor—relatively flat land with modest rolls. There’s neither a Carmel Bay nor Firth of Forth providing mesmerizing water vistas. It doesn’t have a “signature hole”— it’s an ensemble comparable to a synchronized orchestra where the sum total far exceeds any individual dimension.

If Pinehurst #2 were a movie subtle camera angles, riveting dialogue and meaningful character development would serve as the driving force. Other courses globally are akin to action movies—explosions, car chases and a steady pulse-setting frantic pace. Pinehurst#2 is not akin to fast food—it takes time for all the flavors to resonate with the patient player intent on understanding all of its hidden meanings.

Like The Old Course at St. Andrews one needs multiple rounds to understand the total meaning of #2. First-time players often finish 18 holes and cry out what’s all the fuss? Pinehurst #2 is an assortment of design details that will need just a bit of assistance from Mother Nature to flourish properly for the Men’s Open.

The vexing putting greens are the hallmark—convex targets most finicky in what shots are accepted and rejected. The “effective” landing areas to many of the greens are smaller than the actual 5,600 average square footage indicates. Side fall-offs are typical and the player is confronted with a series of club choices—eschewing the typical lob wedge pitch can often prove more useful than just about any other course in the USA. Ross excelled in providing options—choosing correctly the right club and technique pays major dividends.

If the putting surfaces are optimally firm for the Open the need for sound placements and ball positioning will be a must for any player to score low.

At the same time the average player can successfully play #2 without the “sink or swim” mentality seen at many high profile courses in the States.

Pinehurst #2 favors players able to “work the ball” both ways. Having to play a “left to right” tee ball—followed by a “right to left” approach—is not uncommon.

Ross mastered design illusions—dips in the fairways, greens set back from “fronting” bunkers, no trees framing greens—making the player overcome any internal doubts which can quickly take hold for the feint at heart.

Pinehurst has gone through a range of cycles but golf remains the heart and soul. Eight courses offered with a 9th to be added in July with the Jack Nicklaus designed National Golf Club set to join the portfolio—proof positive this mecca is one embodying so much of the game’s grand past while still maintaining its relevance on the world golf stage. This year’s Men’s Open—followed one week later by the Women’s Open—will once again spotlight the genius of Donald Ross and what an enduring masterpiece #2 continues to be.