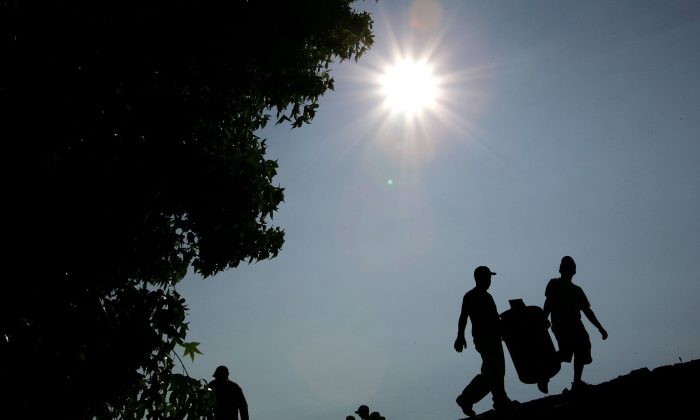 Workers with the Moran Roofing Company carry buckets in Walnut Creek, Calif. in this July 2006 file photo. Roofing is among the most dangerous jobs in America. (Justin Sullivan/Getty Images)
Good to Know

On Labor Day, which celebrates the American worker, many Americans will celebrate and relax, enjoying a break from the work environment. “Labor Day, the first Monday in September, is a creation of the labor movement and is dedicated to the social and economic achievements of American workers. It constitutes a yearly national tribute to the contributions workers have made to the strength, prosperity, and well-being of our country,” according to the Department of Labor (DOL).

Many jobs are dangerous. Here are America’s top five most dangerous jobs.

People in America’s cities might occasionally see a high-rise or even a skyscraper being built. Those men walking around way up in the unfinished parts of the building might be iron workers. Theirs is the fifth most dangerous profession in America. According to the Department of Labor, 37 out of 100,000 iron and steel workers die from workplace injuries each year.

Many Americans may have roofed their own homes or helped friends with roofing and roof repairs. But the mortality rate of the professional roofer is strikingly high. America’s fourth most dangerous job is roofing. That occupation’s on-site mortality rate was 40.5 deaths for every 100,000 workers in 2012, which is 12 times the national average, according to the DOL.

That piloting is dangerous may not surprise a person who’s afraid of flying. Being an aircraft engineer or pilot can be especially dangerous. That profession had a rate of 53.4 deaths per 100,000 aircraft engineers and pilots in 2012. For those who are considering canceling an air trip for fear of a crash, consider one thing. The majority of these cases involve smaller, noncommercial jets and planes carrying businessmen and women to and from smaller airports. The odds of dying on a commercial flight today are 1 in 4.7 million, according to Planecrashinfo.com.

Wondering why fresh fish is so expensive at the grocery store or at the fancy restaurant? Well, part of it has to do with the extremely high mortality rate for commercial fishermen. These brave souls face tough climates, bad weather, using heavy equipment, and the possibility of being hurt hundreds or thousands of miles away from a hospital. Their rate of death on the job is 117 for every 100,000 workers, according to the DOL.

The most dangerous job in America is:

One of the oldest professions on the planet is the most dangerous. Falling trees and limbs can quickly end a life. Combined with equipment accidents, this fast paced, high yield industry also yields a mortality rate of 127.8 per 100,000 workers in 2012.