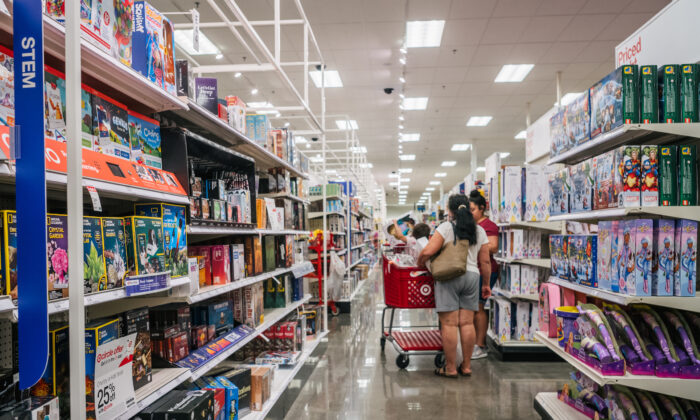 A family shops for toys at a Target store in Houston, Texas, on Oct. 25, 2021. (Brandon Bell/Getty Images)
Viewpoints

Supply chain problems will lift in time, but inflation will linger

Two issues shadow economic prospects today. One is supply chain problems. The other is inflation. A recent report from the Labor Department sheds considerable light on both of these matters.

The report shows that supply chain interruptions have significantly slowed the pace of the economy’s recovery. Though this strain will likely abate in time and allow the economy to catch up, relief will not arrive as soon as administration officials have suggested. Meanwhile, the same Labor Department report suggests that inflation problems will be around for a good deal longer.

The effects of shortages show clearly in the Labor Department statistics. They show that overall business output grew a mere 1.4 percent annual rate during the third quarter, the quarter most affected by supply chain shortfalls, far below the 8.2 percent rate of advance averaged during the first half of the year.

This sudden shortfall in business output growth suggests that supply chain problems kept overall economic output as much as 4 percent lower than it otherwise might have been. The increased hours worked set against this low production response gives a good idea of the waste supply problems imposed.

In everyday terms, it tells, for instance, of the number of times everyone in a shop stood around while supervisors checked the inventory yet again for a needed part that may or may not have arrived. It tells of the trucks that in the past never left the yard until full, now leaving on deliveries with half a load or less. And it tells of ships with full crews riding at anchor for days, even weeks, before they can dock and unload their cargoes. It tells, in other words, of countless hours of paid time wasted because of these supply chain problems.

Supply problems will lift in time. Production schedules will align themselves again as will shipping arrangements. Washington has promised implicitly that the relief will come soon. Transportation Secretary Pete Buttigieg has offered a more sober assessment, indicating that matters will wait until the middle of next year to lift. Even he is likely on the optimistic side of reality, but there’s comfort in knowing that the problems have an end date.

The Labor Department’s report on wage costs is less encouraging about future inflation, something the authorities in Washington also habitually describe as “transitory.”

Indeed, the inflation picture painted in Labor’s report points to what economists might call a “wage-price spiral,” in which rising prices create wage demands that in turn drive up prices, in something of a self-sustaining cycle.

Hourly compensation, according to the report, rose at a 3.3 percent annual rate during the summer quarter. That was quite an acceleration from the 2.7 percent annual rate averaged during the first half of the year, and hardly surprising given the country’s labor shortage. With output per hour in decline, that rise in wages pushed up the cost of a unit of production at an annual rate of 8.5 percent, far above the first half’s slight decline in these so-called unit labor costs.

The change has put enormous pressure on businesses to raise prices or lose all profitability.

But the sequence of events doesn’t end with this unwelcome conclusion. Because inflation, at more than 6 percent over the last 12 months, has outpaced even these robust hourly wage gains, workers will then press for still more wage gains, and given today’s labor shortage, they have the leverage to get them. Unless productivity then skyrockets—unlikely, to say the least—businesses will respond with more price increases. The stage seems set for a “wage-price spiral” that is pretty much the definition of embedded inflation.

Despite problems, the economy will continue to recover from the setbacks endured during the pandemic. Supply chain difficulties may slow the pace of growth for longer than Washington presently suggests, but the economy will likely leave them behind after another eight to 12 months.

The developing wage-price spiral, however, seems to have staying power and may even build. It will soon take center stage as the economy’s biggest challenge.