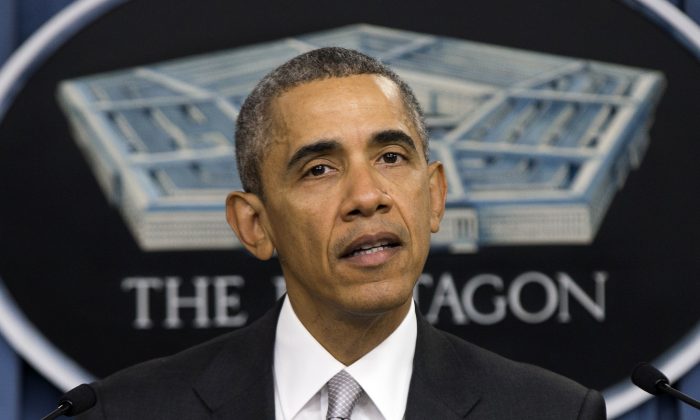 President Barack Obama speaks at the Pentagon, Monday, Dec. 14, 2015, about the fight against the Islamic State following a National Security Council meeting. The president said the U.S. military and allied forces are hitting the Islamic State harder than ever. (AP Photo/Evan Vucci)
US

Americans Want to Get Tougher With the Islamic State

WASHINGTON—After terrorist attacks at home and abroad, more Americans than ever—but still less than half—support sending U.S. ground troops to fight the Islamic State (ISIS), according to a new Associated Press-GfK Poll. A large majority also want a clearer explanation from President Barack Obama about his strategy to defeat the group.

The percentage of Americans who favor deploying U.S. troops to fight ISIS militants has risen from 31 percent to 42 percent over the past year in AP-GfK polling, although it isn’t clear whether those respondents favor a small contingent or a larger ground force that might engage in another protracted Middle Eastern war. Other national surveys in recent weeks have found similar or greater support for American ground troops.

Obama recently dispatched about 50 special operations forces to coordinate the fight in Syria, adding to the more than 3,000 troops already in Iraq. But he and most other politicians oppose sending a large American contingent to augment the U.S.-led coalition air campaign. Most Republicans running for president have not called for that, either, although Donald Trump recently said he would support 10,000 troops, a figure originally floated by South Carolina Sen. Lindsey Graham.

Democratic front-runner Hillary Clinton has pledged to keep American troops out of Syria, saying she would resist sending forces to fight Islamic militants even if there’s another terrorist attack within the U.S.

In the poll, 56 percent of Americans said the U.S. military response to ISIS has not gone far enough, up from 46 percent since October 2014.

Six in 10 Republicans, but only about 3 in 10 Democrats or independents, support sending ground troops, the poll showed.

Analysts say the public desire for more action reflects growing anxiety over ISIS after its attack in Paris, and the shootings in San Bernardino, Calif., carried out by a couple apparently inspired by the group. There is also widespread unease about Obama’s strategy, which envisions a long, slow campaign of airstrikes, diplomacy, training, financial sanctions and other measures.

White House officials say Obama recognizes the need to make the case for his strategy. The president gave an Oval Office speech last week, visited the Pentagon Monday and is expected to visit a counterterrorism facility later in the week.

But Obama has pointedly made the case against a U.S. ground invasion. The U.S. military could clear ISIS from its headquarters in Raqqa, Syria, but ISIS troops would return unless a local ground force was available to keep order, he said Nov, 16, after the attacks in Paris.

“Let’s assume that we were to send 50,000 troops into Syria,” Obama said. “What happens when there’s a terrorist attack generated from Yemen? Do we then send more troops into there? Or Libya, perhaps? “

Most interviews for the AP-GfK poll, which was conducted Dec. 3-7, were completed before last Sunday’s Oval Office address, but the survey found the president had an uphill battle to allay Americans’ concerns.

Daniel Byman, a senior fellow in the Center for Middle East Policy at the Brookings Institution, said Obama’s methodical approach is unsatisfying to Americans but they would be even more displeased if the U.S. troops were dying in Syria.

“Sure, right now, Americans are baying for blood, but if three years down the road, the U.S. has 50,000 troops in Iraq and Syria and we’re taking casualties, then American are going to be saying, ‘Why did people do stupid things and put American troops at risk.”

Shibley Telhami, the Anwar Sadat Professor for Peace and Development at the University of Maryland, has himself conducted surveys showing some support for U.S. ground troops. But he doesn’t believe the public wants an all-out invasion.

“Iraq syndrome is still hanging there,” he said, referring to a hangover from the U.S. invasion and occupation of Iraq, “and the public doesn’t really think that war is going to solve the ISIS problem.”

One AP poll respondent, Carl Ripperton, a retired executive living near Memphis, Tennessee, said he favored a U.S. invasion if American generals determined that one was needed to defeat ISIS.

“It’s gotta be done,” said Ripperton, 76, a National Guard veteran and self-professed political independent. “The bombing doesn’t seem to have done anything. I would think if we just went in there and wiped them out that would take care of it. I mean they might pop up again, but at least we’d take care of this group.”

The AP-GfK Poll of 1,007 adults was conducted online using a sample drawn from GfK’s probability-based KnowledgePanel, which is designed to be representative of the U.S. population. The margin of sampling error for all respondents is plus or minus 3.4 percentage points.