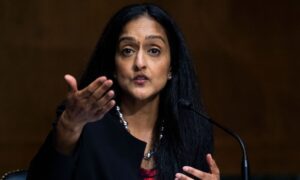 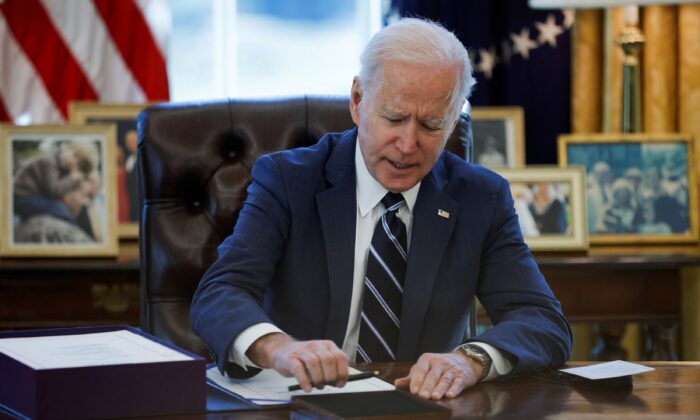 President Joe Biden on March 11 signed the $1.9 trillion COVID-19 relief bill, championing it as supported by most Americans despite it receiving no Republican votes.

“In the weeks that this bill has been discussed and debated, it’s clear that an overwhelming percentage of the American people—Democrats, independents, or Republican friends—have made it clear—the people out there—made it clear they strongly support the American Rescue Plan,” Biden told reporters in the White House’s Oval Office.

“Their voices were heard.”

The House of Representatives in a partisan vote on March 10 approved alterations the Senate recently made to the package, including stripping a federal minimum wage hike. No Republicans voted for the plan in either chamber; one Democrat also voted against it in the House, arguing that much money remains unspent from previous relief packages.

Biden said the bill will rebuild “the backbone of this country” and give working-class people “a fighting chance.”

Biden, continuing a trend of not taking questions, then signed the bill. He and Vice President Kamala Harris plan to travel to multiple locations to talk up the package in the coming days.

The White House initially stated after the House’s passage that Biden would sign the bill on March 12. The schedule was changed because Congress enrolled the bill more quickly than officials expected, according to White House press secretary Jen Psaki.

Psaki has previously cited polls to assert that most Americans support the bill.

The fresh package contains $1,400 stimulus checks for most Americans, as well as $350 billion in aid to state and local governments, $130 billion for schools, and more than $20 billion for COVID-19 vaccine production and distribution.

Stimulus payments will be seen in some bank accounts as soon as this weekend, according to the White House.

Republicans were opposed to the package for various reasons, including the fact that most of the funding isn’t directly related to combating the COVID-19 pandemic, and that most funding for schools is back-ended, or not slated to go out this year.

“This is a purely partisan package that funds the Left’s pet projects on the taxpayer’s dime.”

Democrats argued that the plan contained necessary provisions for responding to COVID-19 and crucial aid to those who have struggled over the past year because of the pandemic.

The bill “will crush COVID-19 and get our economy firing on all cylinders again,” Rep. Ron Kind (D-Wis.) said on March 11. “Much-needed relief is on the way.”