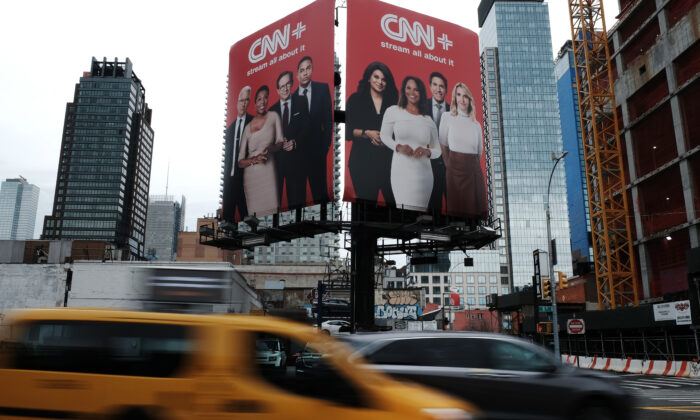 An advertisement for CNN+ is displayed in Manhattan in New York on April 21, 2022. (Spencer Platt/Getty Images)
Media & Big Tech

The confidence of U.S. citizens in American newspaper and television news has fallen to all-time lows, according to a survey conducted by Gallup, between June 1 and 20.

Only 16 percent of respondents have “quite a lot” or “a great deal” of confidence in newspapers, according to the poll. When it comes to television news, this number falls to 11 percent. Of the 16 American institutions measured in the confidence survey, newspapers and television news ranked in the second-to-last spot, with Congress in the last position.

It was not always so dismal. Back in 1979, for example, newspapers garnered their highest level of confidence, at 51 percent. The second-highest reading was at 39 percent, scored in 1973 and 1990. The percentage of Americans who have no or “very little” confidence in newspapers was a record-high 46 percent in the recent poll.

When it comes to television, the highest confidence reading came in 1993, at 46 percent. The current level of 11 percent is the fourth consecutive year that people’s confidence in TV news has been below 20 percent. More than 50 percent of Americans have little or no confidence in television news.

As to TV news, Democrats once more expressed higher confidence when compared with independents, though the numbers were lower for both groups compared with last year. While 20 percent of Democrats were confident about television news, it was only 8 percent among independents, both of which are historical low points. As to Republicans, only 8 percent expressed confidence.

According to Joe Concha, contributor and media analyst at Fox News, there is now a considerable gray area between partisan opinion and actual news. He believes media outlets can improve viewer confidence by resolving this issue.

“They can improve the situation by not injecting so much opinion into what should be straight reporting. And also by not automatically and blatantly taking a side on big issues such as the recent abortion ruling, or serving at the pleasure of one major political party like we saw by calling Florida’s Parental Rights in Education bill the ‘Don’t Say Gay’ bill,” Concha said to Fox News.

A survey from Pew Research Center released this month revealed that journalists and the general public differ markedly with regard to their views on “both-sides-ism,” which refers to whether journalists must always look to give equal coverage to all sides of an issue.

While 55 percent of journalists in the survey insisted that every side does not always deserve equal coverage in the news, 76 percent of Americans wanted the news to cover all sides equally.