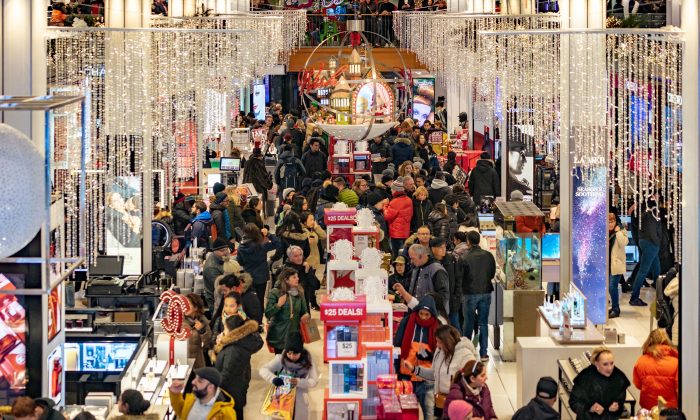 Americans will be much less affected than Chinese producers by tariffs imposed by the Trump administration on hundreds of billions in exports from China, according to researchers from Germany and Switzerland.

“Contrary to public opinion, the greatest share of the tariff burden falls not on American consumers or firms, but on Chinese exporters,” Benedikt Zoller-Rydzek and Gabriel Felbermayr wrote in their November report for the European Network for Economic and Fiscal Policy Research.

The new 25 percent tariffs are affecting or will soon affect about half, or $250 billion, of imports from China. But U.S. companies and consumers are expected to see prices of those products going up by less than 5 percent on average, the researchers wrote. The prices of consumer products would be affected the most, climbing by less than 7 percent, while capital goods would only grow 2 percent more expensive.

Chinese firms, on the other hand, would have to reduce their prices by nearly 21 percent. “It is their declining profit margins that would pay for a large share of the tariffs,” the report stated.

Overall, Chinese firms would pay about 75 percent of the tariff burden and their exports of affected goods to the United States would drop by some 37 percent, the researchers wrote.

By August, Trump added 25 percent tariffs on 1,333 China-made products worth $50 billion in annual imports. China responded with tariffs on $50 billion in U.S.-made products. In September, Trump added products worth another $200 billion a year on the list—initially with a 10 percent tariff that is scheduled to jump to 25 percent on Jan. 1. China couldn’t respond in kind since it imports less than $130 billion worth of U.S. products a year, based on 2017 data.

Trump is scheduled to meet Chinese leader Xi Jinping at the G-20 summit in Buenos Aires on Nov. 30 to Dec. 1. Trump said it was “highly unlikely” he would accept China’s request to hold off on the tariff increase.

“The only deal would be China has to open up their country to competition from the United States,” the president told The Wall Street Journal.

If China fails to come to terms, Trump said he would put a 10 percent or 25 percent tariff on the rest of China’s imports.

Chinese foreign ministry spokesman Geng Shuang said on Nov. 27 that China’s hope is that both sides could work towards a “positive outcome” from the meeting between the two leaders.

The massive volume of imports from China has provided the Trump administration with a plethora of options for products to target. And it’s been the idea of targeted tariffs that brought aboard many Republicans, who have in the past touted unrestricted trade.

Mitt Romney, a vocal critic during Trump’s presidential run, praised Trump’s approach to China. While opposed to broad tariffs, he said in May that “specifically going after the bad actors … makes sense.”

Zoller-Rydzek and Felbermayr noted that the administration went after products with high import elasticity, which means their buyers are sensitive to price and consumers would more likely forgo a buy if the price goes up. In such cases, the impetus is on the seller to keep the price down.

“Through its strategic choice of Chinese products, the U.S. government was not only able to minimize the negative effects on U.S. consumers and firms, but also to create substantial net welfare gains in the U.S.,” the authors wrote.

The tariffs do incur some economic losses since the increased prices make a portion of customers not benefit from products they would have otherwise bought, the researchers noted. They estimated welfare losses to U.S. consumers of $522 million and over a billion to the Chinese.

The authors also expected the U.S. government to cash in $22.5 billion in tariff payments, of which nearly $19 billion is to be paid by Chinese firms. “This implies net welfare gains of $18.4 billion for U.S. consumers,” they wrote.

The report makes clear that the tariffs won’t affect everybody in the same way. For example, most of the affected capital products and about a third of the consumer goods would barely change in price.

Some prices, however, would go up considerably. About 12 percent of the consumer goods on the list would become more than 20 percent more expensive.

“Low-income U.S. households, in particular, will be affected by this increase, as they spend a considerable share of their income on (cheap) Chinese imports,” the authors wrote.

Also, corporations that have moved their production to China have to pay the tariffs too, even if the companies themselves are U.S.-based.

“Their high initial investment in Chinese production sites makes it very costly to adjust their supply chains, and the profits of U.S. multinational firms may drop as a result,” the report noted.