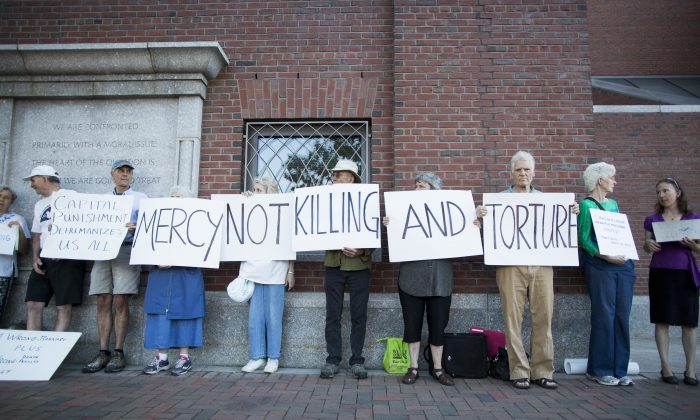 WASHINGTON—Even as President Barack Obama tries to make a hard case for overhauling sentences, rehabilitating prisoners, and confronting racial bias in policing, he has been less clear about the death penalty.

Obama has hinted that his support for capital punishment is eroding, but he has refused to discuss what he might call for.

A Justice Department review has dragged on for 18 months with little mention or momentum. The president recently repeated he is “deeply concerned” about the death penalty’s implementation, though he also acknowledges the issue has not been a top priority.

“I have not traditionally been opposed to the death penalty in theory, but in practice it’s deeply troubling,” Obama told the Marshall Project, a nonprofit journalism group, citing racial bias, wrongful convictions and questions about “gruesome and clumsy” executions. His delay in proposing solutions, he said, was because “I got a whole lot of other things to do as well.”

Obama said he plans to weigh in, and considers the issue part of his larger, legacy-minded push for an overhaul of the criminal justice system. White House officials said the president is looking for an appropriate response and wading through the legal ramifications.

Capital prosecutions are down across the United States. A shortage of lethal injection drugs has meant de facto freezes in several states and at the federal level. Spurred in part by encouragement from Supreme Court justices Stephen Breyer and Ruth Bader Ginsburg, advocates are debating whether the time is right to push the court to take a fresh look at whether the death penalty is constitutional.

A solid majority—61 percent—of the public supports the death penalty in murder cases, but that share has crept downward while opposition has inched up, according to a Gallup poll last month.

Obama isn’t alone in struggling with the issue. Presidential candidates from both sides have said they were conflicted on the issue.

Charles Ogletree, a Harvard law professor who taught the president, said, “Though not definitive, the idea that the president’s views are evolving gives me hope that he—like an increasing number of prosecutors, jurors, judges, governors, and state legislators—recognizes that the death penalty in America is too broken to fix.”

White House officials caution that any presidential statement disputing the effectiveness or constitutionality of the death penalty would have legal consequences.

For example, would the administration then commute the sentences of the 62 people currently on federal death row to life in prison?

Every lawyer representing a death row inmate would make that case in an appeal, said Douglas Berman, criminal law professor at Ohio State University’s Moritz College of Law. Among those inmates: Dzhokhar Tsarnaev, convicted of murder in the Boston Marathon bombing.

“There’s not been a president who in the modern use of the federal death penalty has indicated a disaffinity for it,” Berman said. “And if this one were to say, ‘I don’t think it’s something we ought to be doing,’ that’s a policy statement and personal statement, but it is also one that indisputably would be put in the legal papers and would require courts to grapple with its significance.”

If Obama went further, perhaps formalizing the federal freeze, it could affect other major terrorism cases. The Justice Department has yet to decide whether to seek the death penalty in the prosecution of the man charged in the attack on the U.S. Consulate in Benghazi, Libya, for example.

A moratorium might serve as a model for the states—where most capital prosecutions occur—and would make more of a mark than expressions of concern, advocates argue.

“On an issue like this, it’s important to make judgments on what people actually do,” said Robert Dunham, executive director of the Death Penalty Information Center, which opposes the death penalty. “We have seen in many states governors who say they are against the death penalty, nonetheless denying clemency in controversial cases. … Whether people say they’re personally supportive of the death penalty or not doesn’t really matter. It’s what they do that matters.”