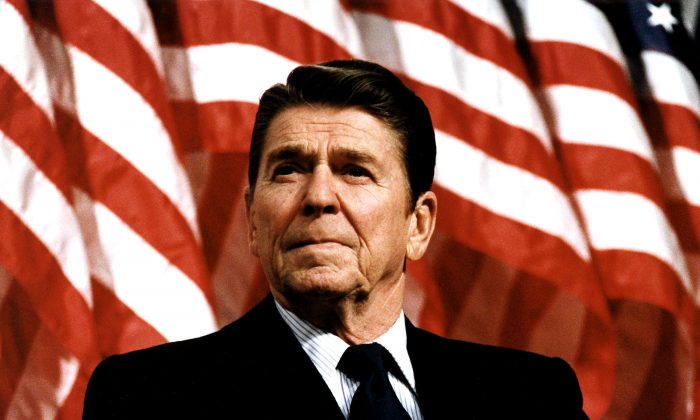 Americans Should Play ‘Game of Chess,’ Not Game of Money, in Competition With China: Reagan Admin Official

US should adopt an 'offensive-defensive' technology strategy instead of 'shopping list,' the official says
By Gary Bai

What was a conceptual cornerstone of President Ronald Reagan’s Strategic Defense Initiative is needed now in the United States more than ever in the face of rising threats from the Chinese Communist Party, a former Reagan administration official says.

Michael Sekora, director of the once-classified Project Socrates, said the project was meant to find out what was making the United States weak—militarily and economically—and turn the tide.

“When we founded Socrates, we had a twofold mission,” he told The Epoch Times in a June interview. “No. 1, determine the true underlying cause of U.S. economic and military decline; and No. 2, once we understood the underlying cause, develop the means to reverse the decline that would ensure America’s superpower status for generations.”

As the director of Socrates, Sekora had at his fingertips resources from the intelligence committee, academia, and cutting-edge industry research institutions, which gave him a “birds-eye view” of the landscape of the most strategically important technologies at the time.

That was when he and his team proposed Socrates, which he called a strategy to play a “game of chess” in technology exploitation, to the president’s closest advisers and then Reagan himself.

It’s not a central-planning scheme nor an industrial policy; Socrates was a whole-of-society gameplan that placed technological superiority as the central objective, Sekora told The Epoch Times.

He and his team then proved to Reagan, by applying the Socrates framework to the Strategic Defense Initiative, that the program would be a game-changer when implemented nationwide while aligned with the U.S. founding principles of self-governance and self-enterprise.

“That’s why Reagan loved Socrates,” Sekora said, noting that Reagan had an executive order drafted close to the end of his presidential term that would have implemented Socrates across the United States, but it was later nullified by President George H.W. Bush.

According to Sekora, Project Socrates was born because the Reagan administration saw the United States as being superseded by its competitors in technological and economic prowess after World War II.

“At the end of World War II … the United States was the only country left with the capabilities to satisfy the world’s needs,” Sekora said. “So the requirements to actually build products and services that were competitive vanished.”

As a result of this lack of competition, U.S.-based companies shifted their modus operandi from being driven by technology-centered planning to a finance-based one, according to Sekora.

“In finance-based planning, the foundation of all decision making is optimizing the utilization of funds,” he said. “You start with the money, you end with the money. That’s MBA at Harvard Business School.”

In comparison, a society with technology planning centers its decision-making around “exploiting” current and future technology in a coordinated and strategic manner, which would guide the allocation of money, manpower, and resources accordingly, Sekora said.

He said that with resources in the intelligence community, open-source information centers, and industry research support, he had a “bird’s-eye view” of the performances of U.S. competitors—including Japan, the Soviet Union, and China—in commercial-military fields.

He said these nations were all using or starting to use technology-centered planning in society, which gave them a decisive advantage over the finance-planning-driven U.S. system.

“Back in the early [1980s], we were losing industry after industry to Japan,” Sekora said, referring to America’s 20th-century commercial competition with the country. While companies such as General Motors were looking at profit margins, Japanese companies were systematically and strategically acquiring industries with a central objective of obtaining a lead in technology over the United States.

The solutions proposed by think tanks and policymakers at the time were “one-liners” that consisted of “Band-Aid” solutions, according to Sekora.

Today, the decision-makers in the United States are making the same mistake with China, he said.

According to Sekora, the Chinese Communist Party’s (CCP) whole-of-society approach to technology strategy is similar in form to Japan’s strategy in the 20th century, but much more threatening to the United States.

He described how China’s technology strategy operates in a two-tiered system. One tier consists of the CCP, which works closely with and directly commands major players, such as Huawei, to gain advantages in the technological playing field—using methods both illegal, such as technology theft, and legal, such as the acquisition of technology companies with the primary objective of obtaining their technology, as well as anything in between.

The other tier consists of the rest of the tech ecosystem in China, where the smaller companies follow in the footsteps of the major players. In doing so, both tiers would act concurrently to further the technological—and therefore economic—competitiveness of the country.

Sekora believes that to regain a competitive edge in technology over China, America must undergo a paradigm shift in its thinking and in its way of approaching technology strategy and become more strategic.

He believes that the U.S. approach wouldn’t work against China because instead of being a technology strategy, he describes it as a “financial strategy for technology.”

“These integrated attacks of China—where it’s economic, military, social, political, everything else—can only be addressed [by] the same integrated approach from the U.S.,” Sekora said.

Instead, he proposed in Project Socrates—approved by and designated in Reagan’s executive order—the establishment of the National Technology Strategy Board.

The board would include representatives from all strategic sectors in the United States, including military, financial, and commercial sectors and would give guidance to the industry on the current strategic-technological priorities of the country.

What’s different about this proposal from that adopted by the Chinese regime is that the U.S. board would allow U.S. organizations of all sizes to work in “symbiotic relationships” with general guidance from the top instead of being a government-dictated structure, Sekora said.

The board would create what he called a “four-dimensional technological space,” a database of all current and future technological capabilities of the United States and its adversaries. This database would present opportunities, risks, and constraints in technological development from a holistic perspective—a cross-industry, cross-sector “bird’s-eye view,” similar to what he had when he founded Project Socrates.

These organizations would therefore be able to work together in “symbiotic relationships” in a coherent, flexible, and independent manner, now that they’re more aware of the guiding priorities set forth by the national technology board and the competitive landscape, he said.

Currently, Sekora is working with members of Congress to propose this modern version of Project Socrates, a plan he calls the “Socrates Automated Innovation Revolution.”

“It’s a game of chess of technology … played both offensively and defensively,” he said. “Bottom line is, we’re in a cold war with China. It is being exploited or being executed in the technology space. Technology space is the foundation of all competitive advantage.”

Winning in this space is “the only way” that the United States can win against China, Sekora said.