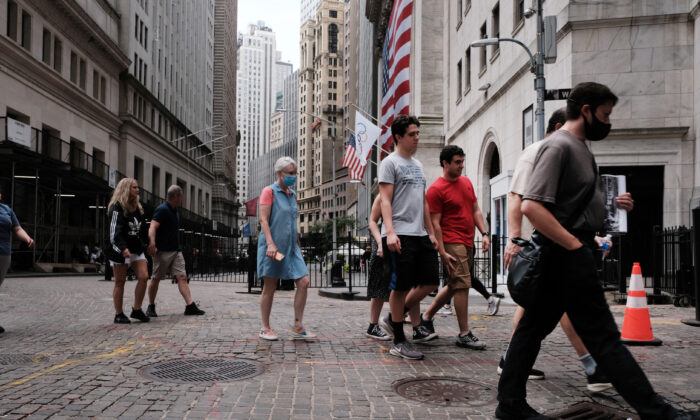 Many Americans worry that they’ll run out of money in retirement, and it’s getting worse, a new survey shows.

Four in 10 U.S. investors think it’s going to take a miracle to be able to retire financially secure. Nearly half (46 percent) of millennials feel this way, according to the 2021 global retirement index by Natixis Investment Managers.

The index showed the United States dropping one step to 17th place in a survey of 44 countries’ national financial well-being. Three-quarters of respondents say increasing levels of government debt will lead to Social Security cuts.

“As a general principle, with some exceptions, one should defer using qualified assets as long as possible,” Boyan Doytchinov, a financial adviser in Medford, New York, told The Epoch Times. “That is a good starting point in retirement planning.”

Qualified assets, IRAs, Roth IRAs, and 401(k)s, are valuable because the longer investments compound without taxation or reduced taxation, the more likely one can achieve and maintain financial independence, Doytchinov said.

The idea of maximizing the tax-advantaged assets is very important, according to Charles Hughes, a longtime financial adviser in Bay Shore, New York.

“The point of accessing qualified assets last is right on the mark. It is the smart thing to do,” he told The Epoch Times.

According to Hughes, a delayed qualified asset withdrawal strategy is so important that he uses it to the fullest extent.

“Delay taking required minimum distributions from qualified accounts each year until the end of the tax year in December,” Hughes said.

He also advises using the same tax-savvy/compounding idea in building retirement assets. Try, he said, to make annual IRA contributions at the beginning of the tax year in January. That speeds up compounding. Done every year over decades, it greatly increases a retirement balance, Hughes said.

“We tend to delay the use of retirement assets as long as possible,” Steve Branton, an adviser in San Francisco, told The Epoch Times.

But “for many, it is to spend taxable accounts first, then tax-deferred accounts such as 401(k)s and IRAs, and lastly tax-free accounts like Roth IRAs,” he told The Epoch Times.

Successful wealth creation and protection for both retirees and pre-retirees can often turn on how long compounding takes place, advisers say.

Did one obtain the highest balance to secure the rest of one’s life? This is a critical element because many Americans live longer than their parents did, and some are on the road to running out of money before they die, according to retirement experts.

While each retirement plan must be unique, advisers say, all must focus on preserving assets. But first, one must accumulate. That means taking advantage of tax avoidance while saving through qualified vehicles, another adviser said.

“Not only does saving for retirement either allow you to reduce or defer your taxable income, you can also receive a tax credit for saving for your retirement if your income is under a certain limit,” said adviser Melissa Brennan in Plano, Texas. “All of these tax incentives are in place because the government really wants us to plan ahead and save for retirement.”

Brennan said it’s essential, no matter what strategy is used, to have a tax-savvy retirement plan, to be disciplined in making retirement account contributions each year, and to avoid breaking into retirement accounts prematurely and triggering tax penalties.

This “keep compounding as long as possible” strategy includes the first years of retirement, ages 59 1/2 to 72. At age 59, a retiree can start accessing qualified money without penalty, but one isn’t required to do so.

Why delay taking qualified retirement money for as many as 13 years?

Once money is accessed, it’s subject to taxation, Hughes said. At age 72, one must start taking withdrawals from most qualified accounts. But the withdrawals must be somewhere between a required minimum or maximum distribution. These numbers are based on estimated lifespan.

Do you need some of your qualified money between ages 59 and 72? Then try, Hughes said, to take a minimum qualified asset distribution, possibly using more of your taxable assets. Thus, the compounding effect of qualified assets, important in generating comfortable numbers, is protected.

For example, Hughes said, “say you have a million-dollar account and your required minimum distribution is $200,000. If you can afford to do so, only take the $200,000, which will subject to taxation.” The remaining $800,000 balance, he said, can continue for another year of growth.

These tax strategies can increase the chances of a successful retirement when one is starting to accumulate, according to another retirement expert.

Why have a retirement plan? Why be particular in accumulating retirements and how one spends it?

These compounding, tax avoidance strategies, advisers say, are critical in determining whether someone will avoid going broke in his or her golden years.