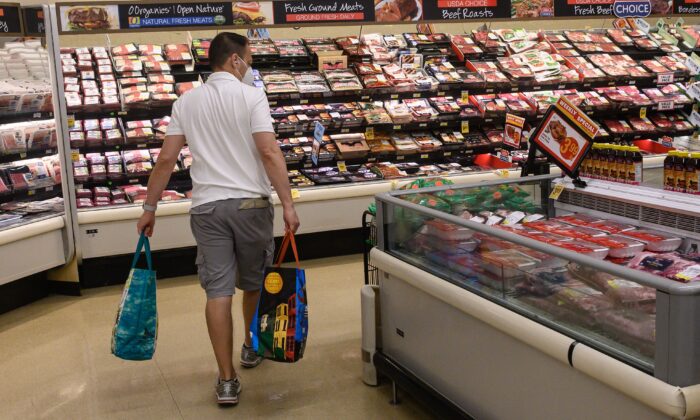 A person shops in a supermarket in Washington, on May 26, 2022. (Nicholas Kamm/AFP via Getty Images)
Economy

Even though Americans have seen sizable wage growth over the past year, real wages have actually dipped during the period due to soaring inflation, which is presently at four-decade high levels.

At the same time, the Consumer Price Index (CPI), a measure of inflation, grew by 0.97 percent in June on a monthly basis and 8.67 percent on an annual basis, data from the Federal Reserve Bank of Cleveland shows.

Deducting CPI from average hourly earnings in June, the real wage growth actually declined by 0.67 percent on a monthly basis and 3.57 percent on a 12-month basis.

For the past 10 years, “very low inflation” provided “real wage growth” for American workers, something which is changing now, Tom McMullen, senior client partner with organizational consulting firm Korn Ferry in Chicago, said in an article published by the Society for Human Resource Management (SHRM).

At present, “wages are up, the highest rate of change in the past decade, but inflation is the highest in 40 years … You don’t hear much angst when wage growth exceeds inflation, but we’re hearing it now, especially given the large gap between the two,” McMullen said.

More pay hikes might be on the horizon. A survey by Salary.com, which provides employee compensation data, found that 73 percent of U.S. organizations are aiming for a payroll budget increase of 4 percent or more in 2022, with 43 percent growing their “salary merit-increase budgets” by 5 percent or more.

However, as long as inflation remains at elevated levels, such wage growth might prove to be too little for Americans struggling with the rising cost of living.

Complicating the wage growth scenario is the U.S. Federal Reserve’s intent to keep raising interest rates until inflation comes down. Since March, the agency has raised its rates by 150 basis points. This includes a 75-point increase in June, the largest such increase since 1994.

Speaking to lawmakers in June, Fed Chair Jerome Powell said that the labor market was tight and “sort of unsustainably hot” while noting that inflation is still far high from the agency’s target of 2 percent. Without bringing down inflation, it would not be possible to have a “sustained period of maximum employment,” he said.

In an interview with CNN, Donald Grimes, a University of Michigan economist, pointed out that though disposable income levels are at a level they were before the COVID-19 pandemic, they are not behaving normally.

Instead of growing at a rate of 2 to 3 percent per year, disposable income is on track to decline by 5.6 percent. This is due to inflation and the end of federal pandemic assistance, he stated.

“For the people who saved some of that money to backstop their spending, life is probably still pretty good,” Grimes said. “But for people who live paycheck-to-paycheck, that decline in real disposable income … that’s much more distressing than economists and policymakers realize.”