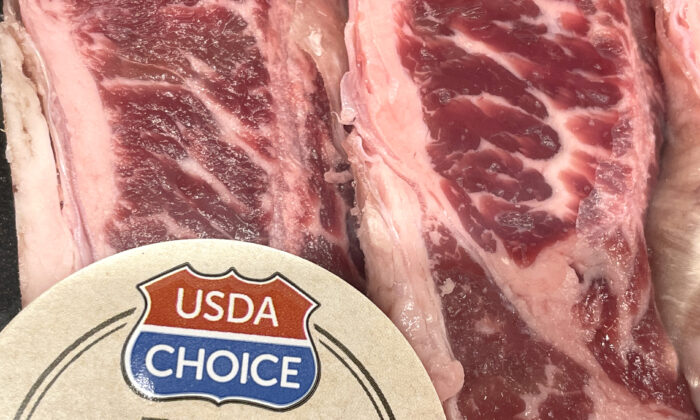 A package of USDA Choice beef is displayed on a shelf at a Safeway store in San Francisco, California, on Oct. 4, 2021. (Justin Sullivan/Getty Images)
Companies

Tyson Foods Inc., the largest meat company by sales in the United States, has reported a jump in revenue after increasing prices for its products, citing supply chain issues, soaring costs, and 30-year-high inflation.

Based in Springdale, Arkansas, Tyson company executives said that chicken prices went up by 19 percent during the fiscal fourth quarter, while the cost of beef and pork rose by 33 percent and 38 percent respectively. The cost of cattle has increased by one-fifth compared to the same time last year, while logistical costs have gone up by 30 percent along with significant raises in ingredient and packaging materials. Poor weather conditions have contributed to driving up grain prices.

“I can’t think of a single thing that has either stayed the same or gone down,” said Donnie King, Tyson’s chief executive, on a Monday conference call with reporters.

Tyson Foods CFO Stewart Glendinning said on a company quarterly earnings call that price increases will continue so as “to ensure that any inflationary cost increases that our business incurs are passed along.”

Sales revenue went up by 20 percent in the past quarter despite a 4 percent drop in volume because of the increase in prices. During the fourth quarter, product prices climbed 24 percent.

A labor shortage that resulted in the sales volume dip is being resolved through increased wages and benefits for workers, according to Tyson executives.

The economic recovery from the pandemic has resulted in improved sales from retailers, supermarkets, and restaurants, fulfilling pent-up demand during the lockdowns. Tyson produces around 20 percent of the beef, pork, and chicken in the country, and carries many leading brands including Jimmy Dean, Ball Park, Aidells, Hillshire Farm, and State Fair.

Long criticized for working conditions, the company is currently focusing on wellness programs and benefits to retain employees. Hourly wages have gone up from $22 in August to $24.

As part of a growing trend, Tyson will be investing considerably in the coming months in automation and robotics, especially to enable faster processing in meat plants. This will, according to the company, also alleviate some of the labor shortage issues.

In the past quarter, Tyson has managed to improve revenues by about 12 percent to $12.8 billion mainly due to high prices. Earnings have gone up to $1.36 billion, double that of 2020, beating Wall Street expectations.

Profit margins have increased with beef products operating at a margin of 22.9 percent, an increase from 9.7 percent in 2019. Prepared foods were operating at 36.5 percent margins, a big increase from 2019’s 4.8 percent. Its poultry business was not performing well due to labor shortages that have now been taken care of, according to King.

In 2022, revenue is expected to grow to approximately $50 billion from this year’s $47 billion. The company booked a profit of $1.15 billion in the fourth quarter. Tyson clocked in an adjusted $2.30 per share when Refintiv analyst expectation was $2.16 per share.

Tyson Foods shares were up 26 percent in 2021, outperforming the S&P by 1 percent.

Consumers have responded to the increase in prices by opting for less expensive chicken and pork instead of beef. As supply chain issues have affected almost all major brands, there is an increase in the availability of private-label products on retail shelves.