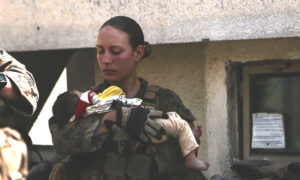 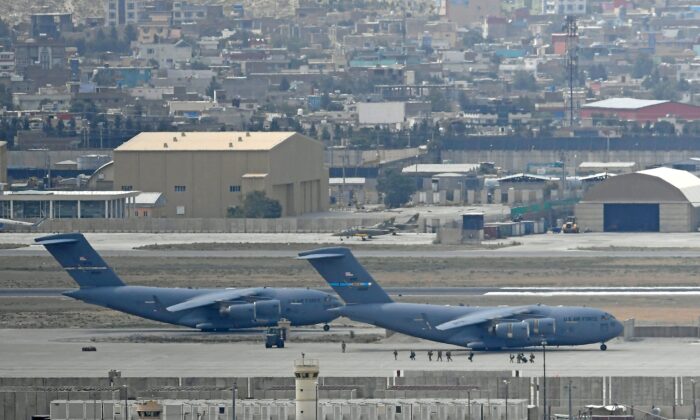 US soldiers walk through the tarmac to board an US Air Force aircraft at the airport in Kabul, Afghanistan on Aug. 30, 2021. (Aamir Qureshi/AFP via Getty Images)
Afghanistan

Americans Not Being Turned Away From Kabul Airport: US Ambassador

American citizens are not being blocked from entering the U.S.-held airport in Kabul, Afghanistan, a U.S. official said Monday.

“Claims that American citizens have been turned away or denied access to HKIA by Embassy staff or US Forces are false,” Ross Wilson, the U.S. ambassador to Afghanistan, said in a statement.

U.S. troops hold the Hamid Karzai International Airport in Kabul. The airport has been used for weeks to evacuate Americans, Afghans, and others who are trying to flee the before the United States fully withdraws from the country, which was taken over by the Taliban terrorist group in mid-August.

Wilson’s statement came after multiple members of Congress said over the weekend that Americans weren’t able to get into the airport.

“I am furious!! My team has been on the phone all day trying to get AMERICAN CITIZENS out. They have been just outside the airport numerous times, but the State Department WILL NOT help them,” Rep. Ronny Jackson (R-Texas) wrote on Twitter.

“US citizens are not being allowed into Kabul international. Biden has ordered the gates closed. Our fellow Americans will soon be left behind. Unbelievable and unforgivable,” Rep. Mike Waltz (R-Fla.) added, referring to President Joe Biden.

“America, you need to know this: Biden is not letting citizens through the airport gates. It has been impossible to get anyone through for the last 24 hours,” Rep. Dan Crenshaw (R-Texas) wrote.

The United States at times has told people not to travel to the facility because of the danger in the area presented by terrorists from ISIS. The Taliban has also beaten some Americans.

The last alert came on Saturday, when the U.S. Embassy in Kabul told any U.S. citizens around the airport to leave immediately.

Americans were also told to “avoid traveling to the airport and avoid all airport gates at this time” because of “a specific, credible threat.”

Multiple rockets were fired at the airport early Monday.

White House press secretary Jen Psaki said that the operations at the airport were continuing “uninterrupted.”

Biden was briefed on the situation, which reportedly included some rockets being intercepted by U.S. missile defense systems and others striking various parts of Kabul.

The United States is poised to withdraw fully from Afghanistan on Aug. 31. Approximately 300 Americans are believed to remain in the country, according to U.S. officials. The United States evacuated or facilitated the evacuation of some 1,200 people on Sunday, a White House official said, though it was unclear how many were Americans.

Biden refused to answer questions on the situation during a public appearance on Sunday.