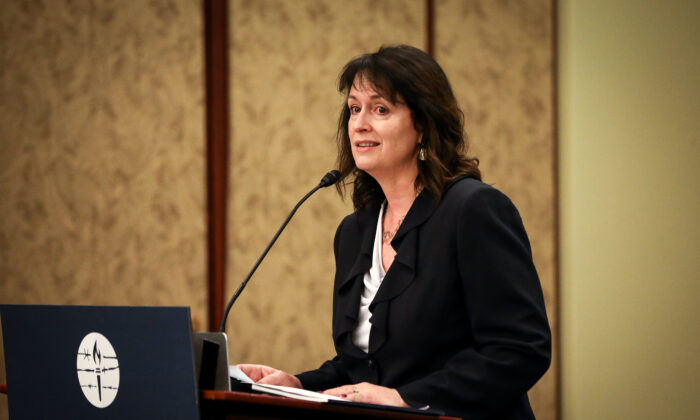 During an interview on EpochTV’s “Crossroads,” Nadine Maenza, chair of the U.S. Commission on International Religious Freedom, said that in order to effectively prevent big companies from using slave labor in China to manufacture their products, people should be willing to pay more for these goods.

If these companies are unable to continue with slave labor in Xinjiang, China, “it’s going cost more to get a pair of Nikes,” Maenza said.

These companies need to reset the way that they do business in order to become competitive again, Maenza said.

“[Then] China wouldn’t have the opportunity they have right now to take advantage of our markets by flooding them with cheap labor because they’ve been produced by slaves,” she said. “We look back, and we blame this other generation for allowing slavery to happen in the United States. And then here we are, allowing it to happen because we want to save a couple of bucks on a pair of shoes or on a bag or on gym clothes.

“The easiest way to reshift this would be to have the American people say ‘no more,’ and it would actually benefit financially companies to end their engagement in slave labor.”

If people stopped buying products made with slave labor, all companies would want to have a certification saying they’re clear of those abuses because they would know they would make more money, she said.

“I think most Americans have absolutely no idea that they might have items in their house that were produced by slave labor,” she said. “And if they did, they’d make different choices in their purchasing.”

Therefore, it’s important that news media outlets cover the truth of what’s happening with all eyes on China, Maenza said, noting that she hopes that there will be more articles, news stories, and opportunities to call out all of those companies that use slave labor in China.

“We should be supporting companies that do not engage in these types of practices,” she said.

In December 2021, a law went into effect that bars importing to the United States goods that have been produced using forced labor of Uyghurs, certain ethnic minorities, or members of other persecuted groups in Xinjiang.

“This is a way that we can say to U.S. companies, ‘You can’t use slave labor to produce products to be sold in the United States,'” Maenza said. “‘That goes against our values, against any sort of standard of human rights.’”

This bipartisan legislation, also known as the Uyghur Forced Labor Prevention Act, makes a rebuttable presumption (a legal assumption with no evidence to the contrary) that every product made in Xinjiang is made with the use of forced labor, she said. However, if a manufacturer deals with a company there that doesn’t use forced labor, that company can be certified by the U.S. government, and the goods can be sold in the United States.

Maenza said this legislation was perceived as “a huge threat” by a lot of large corporations, including Nike. Because of this, some of those corporations fought against the measure.

Nike denied in a statement that it “lobbied against the Uyghur Forced Labor Prevention Act or any other proposed forced labor legislation.”

“While Nike does not directly source cotton or other raw materials, traceability at the raw materials level is an area of ongoing focus. We are working closely with our suppliers, industry associations, brands, and other stakeholders to pilot traceability approaches and map material sources so we can have confidence the materials in our products are responsibly produced,” the statement reads.

Though the Forced Labor Prevention Act covers just a small portion of the abuses taking place in China, Maenza said, it has made it clear that the Chinese regime allows or directly commits these crimes, and this fact can no longer be denied.

Businesses, regardless of whether they’re small, medium, or large, have some part of their supply chain coming from China, or there are jobs connected to these businesses’ relationship with China, according to Maenza. Therefore, businesses are really reluctant to sever their ties with China.

Maenza and three members of the Commission on International Religious Freedom were sanctioned by the communist regime of China in December 2021.

She believes that the sanctions were imposed on them for calling out the state-led oppression of Uyghurs, Tibetans, Christians, and Falun Gong practitioners, as well as for condemning the violations of those groups’ rights and the crimes committed against them by the Chinese government. The other reason could be that she and other commissioners have made some pretty tough recommendations to the U.S. government, which were followed.

The commission has been reporting on religious freedom in China since its inception in 1998, but it’s calling out the religious freedom violations in China hasn’t garnered much attention—that is, until the last four or five years, when these crimes have ramped up to a huge proportion, according to Maenza.

“It got to the point that the international community couldn’t look away,” she said.