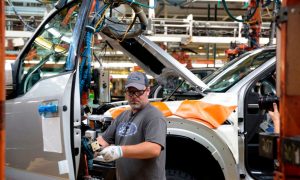 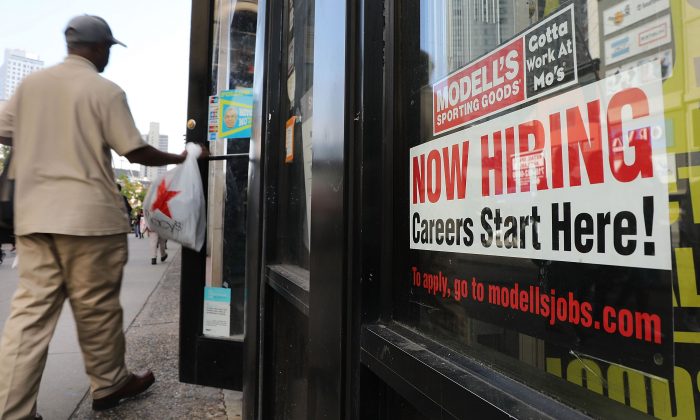 A now hiring sign is displayed in the window of a Brooklyn business in New York on Oct. 5, 2018. (Spencer Platt/Getty Images)
US News

The year of 2018 closed on a positive note, capping off a stunning month of job growth in December. Meanwhile, more Americans decided to look for work and also decided to quit their jobs at the year’s end.

The economy added 312,000 jobs, the most since February, making it the best December for job growth since 1999, according to seasonally adjusted data by the Bureau of Labor Statistics (BLS).

Moreover, estimates for November and October were revised up by a total of 58,000.

Paradoxically, unemployment has also increased in December, from 3.7 percent to 3.9 percent. The data shows it was mostly because some 140,000 people quit their jobs to look for a new one and also because some 80,000 people who previously weren’t seeking employment started job hunting again.

More people quitting amid a strong job market suggests that more Americans feel they can do better for themselves and are sufficiently confident they can land a new job.

People’s voluntary quitting may also signal a boost to productivity as it gives them a chance to find employment or start a business more suited to their skill set.

Productivity grew at a 2.3 percent pace in the third quarter while average hourly earnings increased by 84 cents, or 3.2 percent, since December 2017.

Hispanics Still on a Roll

Hispanic unemployment continued a historically low streak, inching down to 4.4 percent and thus matching the record low set just two months earlier, based on BLS data stretching back to 1973. In the data unadjusted for seasonal changes, the Hispanic female unemployment rate dropped to a new historic low of 4.3 percent.

The commonly reported unemployment rate only includes jobless people who’ve sought employment in the preceding four weeks. The rate stagnated at 7.6 percent in December when counting people who looked for a job in the past year and also those who have part-time jobs but want a full-time one.

Job growth in January is likely to be affected by the current partial government shutdown. About quarter of the federal government doesn’t have money to pay its contractors and its employees won’t get paid as long as the shutdown continues, which may prompt some to quit.

President Donald Trump said he’s committed to keeping the shutdown as long as it takes to negotiate with Congress funding for border security including a suitable barrier along the southern border.

While the private sector’s job market has been on fire under Trump, government employment—including federal, state, and local—has grown at the slowest pace in history, not including years hit by several recessions when the government workforce actually shrank. The BLS data on the subject reaches back to 1939.

During the two years under Trump, government jobs grew at the average pace of a bit over 4,000 per month, compared to nearly 15,000 a month during the last two years of the Obama administration.

The blockbuster December job numbers may have to do with the strong holiday shopping season. Sales rose 5.1 percent to over $850 billion, the highest in six years, according to a Mastercard report on Dec. 26.

Aside from growing wages, Americans also had more money to spend thanks to the significant decrease in gas prices. The national average price hit $2.24 per gallon of regular gas on Jan. 6, down over 22 percent since Oct. 1, according to the AAA travel membership organization.

Trump recently took credit for the falling gas prices, having convinced oil producing countries to pump out more oil earlier this year in preparation for sanctions on Iran’s oil exports. He then handed out sanction waivers to importers of Iranian oil right when his massive tariffs were depressing the Chinese economy, which contributed to reduced expectations for oil demand growth next year.