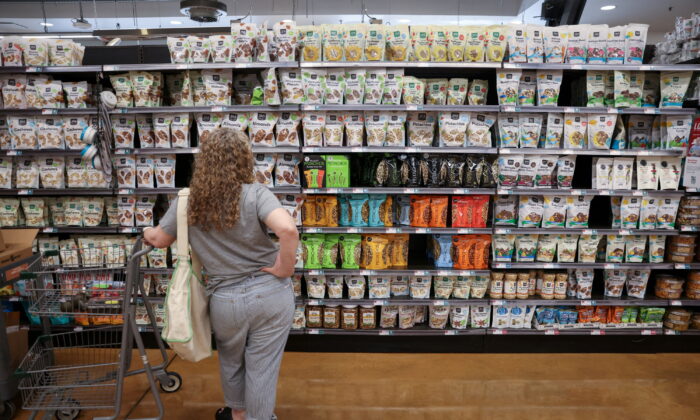 A person shops in a supermarket as inflation affected consumer prices in New York City, on June 10, 2022. (Andrew Kelly/Reuters)
Inflation

Inflation expectations among American consumers fell sharply in July, according to the latest New York Federal Reserve Survey of Consumer Expectations (SCE) published on Aug. 8, suggesting that there is hope among households that sky-high prices will soon be under control.

The SCE Internet-based survey was conducted among a rotating panel of approximately 1,300 household heads, and the results are closely watched by the Federal Reserve as it determines how to respond to the inflation crisis.

Three years from now, consumers see inflation decreasing, to 3.2 percent, down from the 3.6 percent respondents said they expected last month.

Over a five-year period, respondents said they see inflation running at 2.3 percent, down from 2.8 percent in June and closer to the Federal Reserve’s target of 2 percent.

The decrease in consumer outlook for inflation in July was prompted in part by falling gas prices and the belief that food prices, which have shot up in recent months, will slowly decline.

The decrease in expected gas price growth among respondents marked the second largest in the SCE series, just below the 4.5 percentage-point decline in April of this year. Gas prices have risen 60 percent over the past year, the largest 12-month increase since March 1980.

Meanwhile, the decline in food price growth expectations was the largest observed since the monthly rotating panel survey began in June 2013.

Among respondents, smaller declines were also seen for rent, from 10.3 percent to 9.9 percent; medical care, from 9.5 percent to 9.2 percent; and college education, from 8.7 percent to 8.4 percent, according to the report.

Elsewhere, the report showed that perceptions about households’ current financial situations compared with a year ago improved slightly in July, with fewer respondents stating that they are financially worse off than they were a year ago.

Overall, 9.5 percent of households said they expected to be “much worse off,” compared with 13.6 percent last month. Fewer respondents also said they expect their financial situation to deteriorate within the next 12 months.  However, the combined “worse off” percentage is still one of the worst since the survey began.

‘Does Not Mean Inflation Is Coming Under Control’

The report comes as experts believe the Federal Reserve will likely raise the interest rate aggressively, with either a move of 50 basis points or 75 basis points during the upcoming September meeting. Fed policymakers will no doubt find the latest report a welcome relief as they continue to tackle soaring inflation.

Meanwhile, analysts anticipate that the Labor Department’s Consumer Price Index (CPI) for July, which is set to be published on Wednesday, will show a slowdown in inflation, to 8.7 percent, compared with June’s high of 9.1 percent, Reuters reports. That figure, however, is still significantly up from pre-COVID-19 levels.

Yet while American consumers appear to be more hopeful about the outlook for inflation, Larry Summers, former U.S. Secretary of Treasury under President Bill Clinton, has warned that inflation is far from coming under control.

“Yes, there will be disinflation coming from gasoline and other commodity prices. Even though it influences, as it should, expectation measures because they are for the full CPI, it does not mean inflation is coming under control,” Summers wrote on Twitter on Aug. 9.

“In the face of core inflation above 5 percent and accelerating, the Fed has recently generated a significant easing of financial conditions. The Fed remains behind the curve in its actions and, if the last press conference is any guide, way behind in its assessments,” Summers added.

Elsewhere, Jeffrey Snider, chief strategist at Atlas Financial, noted on Twitter that “some people are going to say inflation expectations are falling because [of] Fed’s aggressive rate hikes,” but that this was “bull.”

“No one outside the media is buying the Fed’s rate hikes. Recession, on the other hand, that’s everywhere, and it is one way to end ‘inflation’ actually consistent with facts,” Snider said.