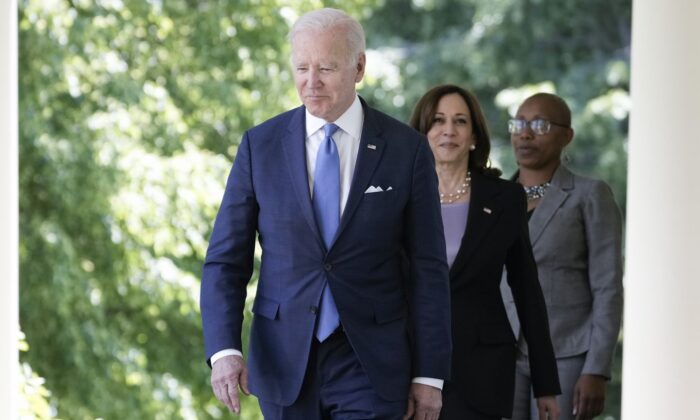 President Joe Biden and Vice President Kamala Harris walk to the Rose Garden of the White House, in Washington, on May 9, 2022. (Angerer/Getty Images)
Inflation

The real median 2021 household income of Americans, recorded at $70,784, was down for a second year in a row, while poverty crept up as the country battles inflation at a 40-year high, according to numbers released on Sept. 13 by the U.S. Census Bureau in its annual report on the nation’s financial well-being.

The percentage of U.S. citizens with health insurance coverage for all or part of 2021 was 91.7 percent, an increase from 91.4 percent in the prior year.

High inflation keeps the economy from breaking through the pre-pandemic levels. The 12-month Consumer Price index (CPI), a measure of annual inflation, has consistently remained at or above 7.5 percent every single month this year. It hit a four-decade high of 9.1 percent in June and was at 8.5 percent in July. When Joe Biden took over the presidency in January 2021, the 12-month CPI was 1.4 percent.

The Gini index—an indicator of how far apart incomes are from one another—showed that income inequality increased by 1.2 percent between 2020 and 2021. This is the first time since 2011 that the index went up annually, from 0.488 to 0.494, indicating that the income disparity grew larger.

Inequality increased by 4.0 percent between the middle and bottom of the income distribution, while it remained the same between the top and middle.

Almost 21 million females and 17 million males were living in poverty, according to the Census report. The poverty levels for those aged under 18 went down annually, from 16.0 percent to 15.3, while for those who were 65 and above, it went up from 8.9 percent to 10.3. The poverty level remained the same for ages between 18 and 65.

When it came to educational attainment, 5.4 million Americans without a high school diploma were living under the poverty line. More than 8 million finished high school, but didn’t complete college and were living in poverty. For those with a bachelor’s degree, it was 3.5 million.