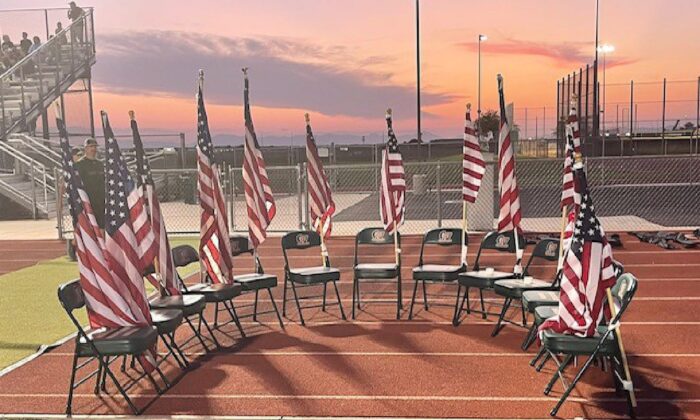 Campo Verde High School varsity football team carried 13 American flags to the field to honor the 13 service members killed Aug. 26 in Afghanistan. Kathleen Diggs, counselor and community service coordinator at Campo Verde, said the flags were then set up near the field with 13 empty chairs. (Zach Alvira on Twitter)
Viewpoints

Americans Have Not Forgotten the 13 Soldiers

MIDDLETOWN, Pennsylvania—When judging the nation’s character, the media tend to gravitate toward its loudest voices, its most extreme measures, its deepest grudges. The result is a loss of all subtlety and nuance.

In the days and weeks following Aug. 26, when our nation lost 13 service members in a deadly terror attack in Afghanistan, something profound happened across the country that few in the national media have noticed: simple but meaningful tributes to honor those American lives lost.

At the Tattered Flag Brewery in this Dauphin County borough, just outside of Harrisburg, they set out 13 beers at the bar with an American flag in the center, marking the space “Reserved.”

The Fossil Bar and Grill in Russell, Kansas, did something similar.

“We wouldn’t have our freedoms without the sacrifices of the brave,” said the owner, Nick Buehler. “Our community has many brave men and women who have served our country, 13 beers honor those 13 heroes, but it also honors our hometown heroes.”

The table setting has spread not only through different bars and breweries across the country, but also to restaurants, diners, businesses, and casinos, as well as along front yards, town squares, and high schools in suburbs, cities, and small towns everywhere.

Last week as college and high schools across the country kicked off their first games, hundreds of them found their own unique ways to honor the fallen 13. In North Carolina, the Greenfield Central Junior High tweeted that members of their 7th grade football team worked together to plan a ceremony before this morning’s game.

“They placed flags in 13 empty chairs next to the field to remember the service members killed recently in Afghanistan.”

Kathleen Diggs, counselor and community service coordinator at Campo Verde, said the flags were then set up near the field with 13 empty chairs.

“The effort was 100 percent student-driven,” she said. “This was something they came to us wanting to do.”

Diggs said what she sees in Gilbert’s students is remarkable.

“I see in our youth a desire to do the right thing,” she said. “This was an outpouring of compassion from their own hearts. They wanted to do something that would demonstrate that they cared for these soldiers and their families.”

In Independence, Montana, Youth Court students and volunteers included 13 chairs with the names of the military lost in Afghanistan in front of the Old Jackson County Courthouse.

A Starbucks in Virginia Beach, Virginia, placed 13 cups of coffee on a table to honor the fallen with a note that read, “This table is reserved for the 13 soldiers lost in Afghanistan on August 26, 2021.”

These are not one-offs—placed there for a day and then gone. Many of them throughout the country remain even now.

Too often, we let others define who we are—particularly those with the loudest megaphones, or worse yet, those with the most access to power. Even worse, the cultural curators who have the wealth and power use it to convey the image of an America that largely does not exist.

I would argue these gestures of mourning aren’t gestures at all, but signs of the character of a nation. Each one is not a photo-op, but a sign of the constant compassion that lives within us, just below the surface—an expression of our exceptionalism that is waiting to emerge.

We as a people are always looking for ways to come together, to drown out the loudest voices trying to divide us. We are not the NFL that now showcases two national anthems; we are the people who raised children who want to show their support for those who protect us by honoring them with empty seats or by raising the American flag without showing it any disrespect.

The media have moved the conversation off the front pages. But what happened and continues to happen in Afghanistan has left a mark on the American psyche. It crosses political ideologies, race, and socioeconomic fronts—a mark the loudest voices have failed to see.

Many in the media mistakenly believe people are now upset about Afghanistan because of politics or because they believed we should have stayed. They think all this will go away because they have stopped covering it. They believe Americans will turn away from the imagery of Afghan women being beaten for demanding their rights or of American citizens trapped, helpless, in what can only be described as a hellish existence.

They could not be more wrong.