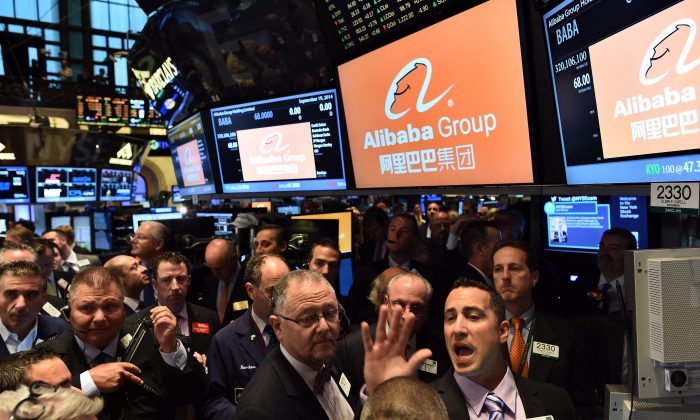 WASHINGTON—A rising number of Chinese companies in U.S. capital markets pose a risk for U.S. investors as they unwittingly finance companies associated with concentration camps in China, an expert warns.

Through public pension and retirement funds, investors are transferring wealth from the United States to Chinese entities that do not comply with U.S. laws, a problem that has been overlooked for more than a decade.

“Now, that’s a lot of financing that’s being attracted from unwitting American investors,” he said at a May 2 event hosted by the civil advocacy group Committee on the Present Danger: China, launched this year.

There is a wide spectrum of companies traded on the U.S stock exchanges and many of them are “outright bad actors,” he said.

After closely examining Chinese enterprises and their entire network of subsidiaries, Robinson found that some are linked to the Chinese People’s Liberation Army, for example.

These companies are “national security abusers of all stripes, as well as human rights abusers,” he said, adding that they are associated with sanctions violations, proliferation of weapons of mass destruction, cyber hacking, or building and militarizing the islands in the South China Sea.

And in terms of human rights, he said there are Chinese companies that provide “surveillance cameras and facial-recognition technology and the like to help maintain the incarceration of some 1 million Uyghurs in Xinjiang,” in so-called detention or concentration camps.

The majority of U.S. investors are unaware of the identities of these companies and their malicious activities. Investment prospectus, legal documents issued by companies during stock offerings, don’t disclose these potential risks to U.S. investors.

“You start to see a trend where trillions of dollars are going to flow into our markets over the next two to three years,” Robinson said. “It is conceivable that one morning, the American people wake up and find—whether it’s 12 percent, 15 percent, 17 percent—some high number of their retirement portfolios are Chinese securities.”

There’s been no penalty for these companies to date. Robinson warned, however, that any sanctions toward Chinese entities based on their malevolent behavior will damage the value of U.S. retirement and pension funds, putting Americans at risk.

There are many victims in the United States whose life savings have been wiped out because of Chinese stocks. Public pensions and retirement funds have lost billions of dollars, according to “The China Hustle,” a documentary released in 2018.

After the financial crisis of 2008, hundreds of Chinese firms listed on U.S. exchanges through a process called a reverse merger with a public U.S. company.

In the film, whistleblower and activist short-seller Dan David explains how Chinese companies mislead U.S. investors through overstating their operations, revenues, and profits. He hired researchers to go to China and investigate dozens of companies. The researchers found out that the “fraud is out in the open” and some factories are “Potemkin villages.”

For example, L&L Energy, a company mentioned in the movie, stated to its shareholders that it produced coal at its LuoZhou and LaShu mines in China. Through inspections of these mines, researchers found that there was no production taking place at either mine. L&L had fabricated its production and revenue figures, according to the movie.

His first inclination was not to short these stocks, David told The Epoch Times.

“The first thing we did is naively talked to the investment banks about what the mistakes we thought they were making,” he said. “And then we realized that these weren’t mistakes but purposeful business decisions on their part.”

After receiving dismissive answers from the exchanges and the Securities and Exchange Commission, David started short-selling these fraudulent companies.

“Once we started shorting and making a lot of money, then all these people wanted to listen, if not sue us,” he said.

Short selling is when an investor borrows stock from a broker and sells it at its current market price, planning to buy it back later for less money. Short sellers bet on, and make profits from, a fall in a stock’s price.

“It was nice to make the money, but at a certain point in time, you have to sit back in your own skin and say, where does this money come from?” David said.

“And the answer is, it came from my friends, my family, my neighbors, my fellow Americans. And that just didn’t sit very well with me.”

David helped expose $15 billion in fraud in U.S. capital markets and had 12 companies de-listed from the exchanges.

There is not any one culprit to blame, he said. The fraud is facilitated by U.S. lawyers, bankers, and auditors who have a vested interest in these bad practices outlined in the movie because they get business mandates and fees from these companies.

“If you think about it, this is a cooperation between a China operator and the American banking system and American facilitators,” he said. “A Chinese chicken farmer doesn’t wake up one day and know how to defraud the U.S. capital markets. They are helped by us.”

“It’s not just the smaller companies,” he continued. It is the bigger companies like Alibaba that pose the same risk.

“I can reverse engineer the financial statements from Amazon, Apple, Tesla,” he said but “you can’t do it with Alibaba. I mean, they have thousands of subsidiaries.”

David is frustrated with Congress for failing to recognize the problem, calling lawmakers “clueless.”

“I’ve lobbied Congress, nobody is doing anything about it. It’s just crazy,” he said.

“When the money is raised here and taken to China, we have no apparatus to get it back.”