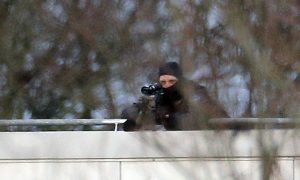 Many fewer Americans feel satisfied with the nation’s security from terrorism, according to a new Gallup poll. While last year 69 percent were satisfied, this January only 59 felt the same.

Gallup called people for the poll between Jan. 5-8, partially overlapping with the Jan. 7 terrorist attack on French newspaper Charlie Hebdo in Paris and the media attention on terrorism that followed. That likely made the issue “more salient in Americans’ minds,” Gallup noted in a release.

The satisfaction numbers plummeted 14 percentage points for Republicans (down to 49 percent), while only 4 percent for Democrats (down to 71 percent).

Despite the drop, only 2 percent of respondents said terrorism is the nation’s biggest concern. Top concerns were the economy in general and dissatisfaction with the government.

Gallup surveyed 804 adults in all 50 U.S. states and the District of Columbia for the poll. The margin of error for this group is ±4 percentage points at the 95 percent confidence level.