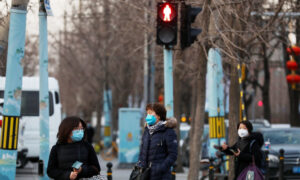 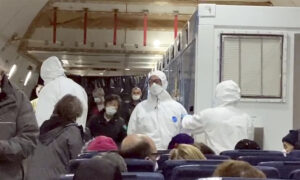 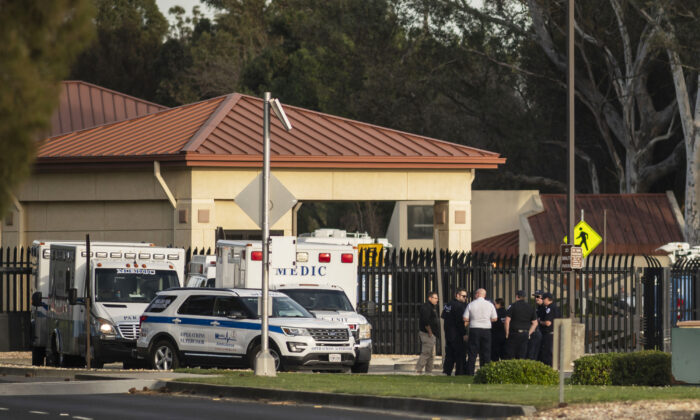 A group of ambulances from the Solano EMS Cooperative stage at the visitor center at Travis Air Force Base, adjacent to Fairfield, Calif. on Feb. 16, 2020. (Hector Amezcua/AP Photo)
CCP Virus

Multiple groups of Americans who were evacuated from China in early February were released from mandatory quarantine after two weeks in isolation.

Buses ferried some 100 of the U.S. citizens from Marine Corps Air Station Miramar to San Diego International Airport Tuesday morning for flights to other locales, the San Diego Union-Tribune reported. The rest got in their cars and departed for their homes.

Evacuees were also released from the Travis Air Force Base in Fairfield.

The groups, totaling 350, were flown to the bases on Feb. 5, carrying Americans who were in Wuhan. The new virus emerged in the Chinese city in December 2019.

The 64 others on the later flight were still in quarantine at the San Diego base. Other groups are isolated at Joint Base San Antonio-Lackland in Texas and Camp Ashland National Guard Base in Nebraska.

None of the people who were released pose any health risk “to the surrounding community, or to the communities they will be returning to,” according to the CDC.

One man who was released with his wife, giving only his first name, John, told the Tribune on Tuesday that they stayed inside for around 10 days while still in China before being evacuated to the United States.

“So, in total, about 24, 25 days (in quarantine). It is very difficult. It’s exciting to be back,” he said. The couple lives in Minnesota.

Health officials have said that any Americans who were evacuated to the United States would be free to leave if they didn’t show symptoms during the quarantine. They’ve defended evacuating Americans, arguing that the situation in China warranted the action.

“The situation in China is concerning. The virus is spreading quickly there, and an overwhelmed healthcare system there is going to be challenged to provide adequate care for other urgent medical needs,” Capt. Jennifer McQuiston, deputy director of the Centers for Disease Control’s division of high consequence pathogens and pathology, said at a press conference earlier this month.

“So it’s safest for these Americans who are healthy and not known to be infected to be brought home.”

The first group of evacuees was released from March Air Reserve Base in Riverside County, California on Feb. 11. Five other planes full of evacuees from China later arrived in the United States.

Two other planes, full of Americans who were on board the Diamond Princess cruise ship, were flown to California and Texas this week. The planes carried 340 Americans in total.

The State Department announced later that 14 of the Americans tested positive for the new virus but were allowed to fly back to the United States because they didn’t show symptoms. Asymptomatic and person-to-person transmission of the new virus has been confirmed. The passengers were isolated from the rest of the people on the flight, the State Department and Health and Human Services said in a joint statement.

The CDC said on Tuesday that Americans still in Japan won’t be allowed to return to the United States for at least 14 days after they leave the cruise ship.

“Currently, there are more than 100 U.S. citizens still onboard the Diamond Princess cruise ship or in hospitals in Japan. These citizens have been placed under the restrictions, as have the ship’s other passengers and crew. After disembarkation from the Diamond Princess, these passengers and crew will be required to wait 14 days without having symptoms or a positive coronavirus test result before they are permitted to board flights to the United States,” the agency said in a statement.

“If an individual from this cruise arrives in the United States before the 14-day period ends, they will still be subject to a mandatory quarantine until they have completed the 14-day period with no symptoms or positive coronavirus test results.”