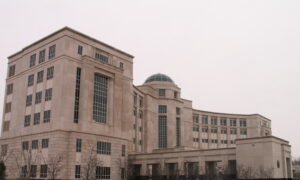 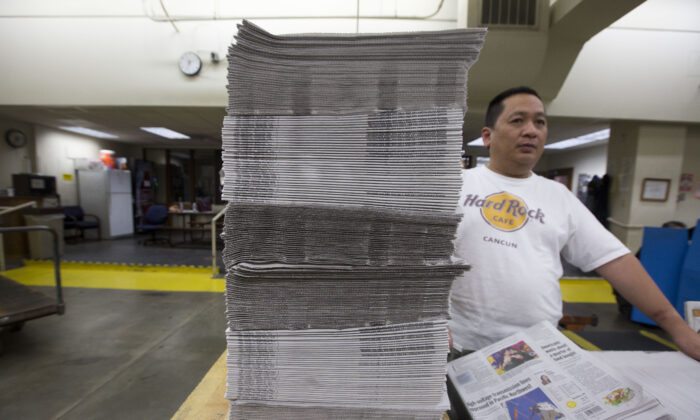 An employee bundles stacks of freshly printed newspapers at the Columbian newspaper in Vancouver, Wash., on April 18, 2018. (Natalie Behring/Getty Images)
US News

Americans’ distrust of mass media has reached a record high, with 33 percent of those polled by Gallup saying they had no confidence at all in the media. At the same time, Democrats have reported increasing levels of trust in the media.

Republican confidence in the media has plummeted while Democratic Party supporters’ trust in the media has risen dramatically, the pollster reports. Democrats’ trust over the preceding four years has been among the highest Gallup has measured for any party in the past two decades.

The partisan divide over the reliability of the media swelled to a record 63 points as a mere 10 percent of Republicans surveyed in Gallup’s annual Governance poll said they had a “great deal” or “fair amount” of trust in the media, compared to 73 percent of Democrats who answered the same way.

The massive gap between supporters of the two parties is the largest the 86-year-old, Washington-based Gallup organization has recorded since it started asking respondents the question in the 1970s.

“Americans’ confidence in the media to report the news fairly, accurately, and fully has been persistently low for over a decade and shows no signs of improving, as Republicans’ and Democrats’ trust moves in opposite directions,” Gallup said in a statement.

“The political polarization that grips the country is reflected in partisans’ views of the media, which are now the most divergent in Gallup’s history.”

Gallup first asked respondents about their trust in mass media in 1972 and has continued to ask the question almost every year since 1997. Trust ranged between 68 percent and 72 percent in the 1970s, and though it had dipped by the late 1990s, it remained in majority territory until 2004, after which it slid to 44 percent. After hitting 50 percent in 2005, it hasn’t gone above 47 percent.

Americans’ overall trust in the media has leveled off since last year. The 33 percent who indicated they don’t have any confidence reflects a five-point uptick and is the highest reading on record.

“Republicans are the main drivers behind this change: 58% of them now express this view, marking a 10-point increase and the first-ever majority-level reading. Although Democrats’ overall level of trust has not changed, the 57% who now say they have a fair amount of trust represents a 12-point jump from 2019, mostly attributable to a decrease in the percentage saying they trust the media a great deal,” Gallup stated.

“Americans are largely overwhelmed by the sheer volume and speed of news coverage, and 74% say the spread of misinformation online is ‘a major problem,’ exceeding all other challenges posed by the media environment,” Gallup said.