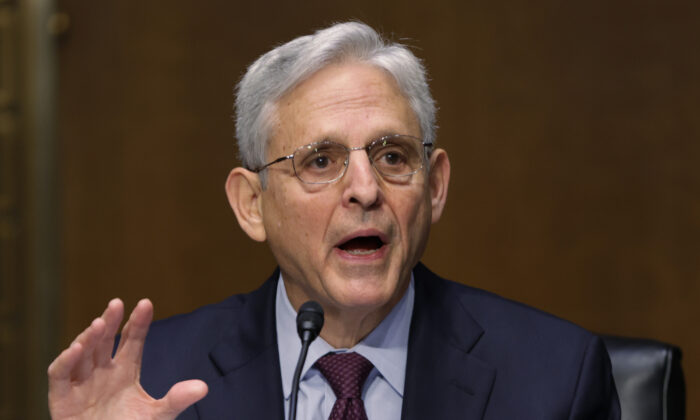 Attorney General Merrick Garland testifies at a Senate Judiciary Committee hearing about oversight of the Department of Justice in Washington on Oct. 27, 2021. (Tasos Katopodis/Pool/Getty Images)
Viewpoints

Writing for RealClearPolitics, professor Andrew E. Busch of Claremont McKenna College finds: “One reason for Americans’ increasing political discomfort—the feeling that politics has become a blood sport in which traditional protections and safety nets are no longer present—is that the nonpartisan insulation protecting the rule of law and consent of the governed has frayed.

“There’s a broad pattern of offices that require political neutrality being converted into offices that are genuinely partisan in their operation.”

What, I wonder, was his first clue?

Understandably, Busch concentrates on the most recent examples of this creeping partisanship in places that are supposed to be nonpartisan, since the Biden administration represents a quantum leap in the politicization of everything, but especially of the law.

Attorney General Merrick Garland, he writes, “has already used the Justice Department to advance his own party’s version of the stolen-election story by suing to stop state legislative efforts to enhance ballot security, then threatening to sic the FBI on parents who complain to their local school boards about left-wing political indoctrination in the classroom.”

By contrast, Busch praises the nonpartisan spirit of former Attorney General William Barr for resigning rather than supporting President Donald Trump’s demand for a thorough investigation of election irregularities.

But then he can’t help noticing the concerted legal efforts by Democratic attorneys general in swing states last year to change voting laws in order to create those irregularities—and, with them, the opportunities for cheating.

You can see why Busch wants to be even-handed and pretend that the partisan takeover of supposedly nonpartisan institutions is coming from both sides, but he can’t quite obscure the fact that the overwhelming majority of these efforts have been made—and successfully made, thanks to the compliant media—on behalf of Democrats.

There is nothing like a Republican equivalent, for example, of the partisan takeover of the FBI under James Comey.

“The course of the Russia investigation,” writes Busch, “complete with the obvious biases of Andrew McCabe, Peter Strzok, and Lisa Page, implied that the bureau had picked sides.”

Implied? Can there be any doubt about which side these and others in the bureau were on? Or which side Robert Mueller and his team were on? If there were any doubt about it, it must have been dispelled by the recent revelations, and indictments, coming out of the John Durham investigation.

Busch might also have mentioned the disparity in federal law enforcement’s treatment of the Capitol protesters of Jan. 6 as constituting an “insurrection” and its almost complete lack of interest in the hundreds of riots, the billions of dollars in property damage, and the many deaths that took place around the country last summer.

You don’t have to be particularly good at spotting “implied” biases to tell that the difference between the two was that the first was in support of Trump, the others opposed to him. And, violently, opposed to the police. But why would we expect the federal police, ostensibly there to uphold the rule of law, to care about that?

Also, as I pointed out last summer in these pages, Gen. Mark Milley, the chairman of the Joint Chiefs of Staff of the nation’s armed forces, traditionally our No. 1 nonpartisan institution, along with the judiciary, testified before Congress on behalf of a Democratic talking point by asserting on the basis of zero evidence that the Capitol incident was motivated by “white rage.”

Milley also is tasked with weeding out of the armed services those identified by the extreme left as members of the “extremist right.”

But the perspicacious could have picked up hints of the erosion of the “nonpartisan insulation” of key institutions long before 2016.

The politicization of the judiciary, I would argue, began at least as far back as 1987 when a certain Joseph R. Biden, newly appointed chairman of the Senate Judiciary Committee, put the kibosh on President Ronald Reagan’s nomination of Robert Bork to the Supreme Court for transparently political reasons.

Chief Justice John Roberts, who once said of his fellow judges that “we don’t work as Democrats or Republicans,” has gone to heroic lengths to keep up the pretense of nonpartisanship in the judiciary, but then, he’s also the man who, apparently without irony, once called the U.S. Senate “the world’s greatest deliberative body.”

The politicization of the armed services began even earlier. As the late Colin Powell cheerfully put it in 2007, presumably with reference to his own military career, which started in the Vietnam era, “Anybody who becomes a senior officer had better have some political instincts or you’re going to get ground up. We are a political nation. It is not a dirty word.”

What he meant to say, perhaps, was that it’s only a dirty word when applied to constitutionally nonpolitical institutions. Like the military.

I understand that he was talking about the internal politics that are inevitable in any large organization, but in the military, whose most senior officers are appointed by civilian (and political) authority, those politics are always bound up with the other kind.

Under President George W. Bush we learned, at least if we were paying attention, of the politicization of the CIA, which regularly briefed the media (anonymously, of course) against their ostensible commander-in-chief.

Under President Barack Obama we learned, even if we weren’t paying much attention, of the politicization of the Department of Justice and the IRS.

And, as everyone now knows, under Trump we learned of the politicization not only of the FBI and (again) the Justice Department but also of the State Department. All three, while ostensibly serving the president, were actually undermining him.

It shouldn’t be necessary to point out that all of these encroachments of the political onto officially nonpolitical territory have been in one direction and one direction only—leftward. It’s as if there were some law of political inertia analogous to Robert Conquest’s Second Law of Politics: “Any organization not explicitly right-wing sooner or later becomes left-wing.”

Maybe this is what the progressives mean by saying that they’re “on the right side of history,” If so, it means that the rest of us, who still treasure what we think is our right to be nonpolitical, must be on the wrong side of history.