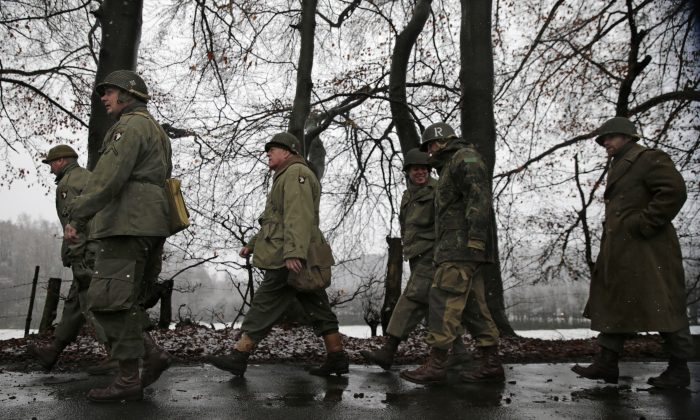 Re-enactors dressed as US WWII soldiers walk along a road during the 70th anniversary of the Battle of the Bulge or the Ardennes Offensive, in Bastogne, southeastern Belgium, Saturday, Dec. 13, 2014. The Battle of the Bulge was fought in dense forests and narrow valleys of the Belgian and Luxembourg Ardennes and was one of the bloodiest battles of World War II. (AP Photo/Yves Logghe)
International

Americans, Belgians Mark 70th Anniversary of Battle of the Bulge

BASTOGNE, Belgium—Braving snowy weather, Americans and Belgians gathered in the Ardennes region of Belgium on Saturday to mark the 70th anniversary of one of the biggest and bloodiest U.S. battles of World War II_the Battle of the Bulge.

Jean-Claude Klepper, 62, of Virton, Belgium, and his 15-year-old daughter Aurelie dressed up like World War II GIs to mark the occasion.

“We must never forget what happened in 1944,” the elder Klepper told The Associated Press. “Many American soldiers came here to defend Europe. We must honor them for what they did.”

Stephen Sams, 41, a U.S. soldier based in Germany, said for him the battle waged in the dense forests and narrow valleys of Belgium and neighboring Luxembourg epitomized “the unwillingness of American forces to give up in the face of adversity.”

Starting on Dec. 16, 1944, and for nearly six weeks, more than 600,000 American soldiers, fighting in freezing conditions and often hungry and dog-tired, took part in desperate efforts to contain, then throw back, a surprise German counteroffensive masterminded by Adolf Hitler himself.

British Prime Minister Winston Churchill hailed the ultimate result as “an ever-famous American victory.” But it came at a high cost: 80,987 U.S. casualties, including 10,276 dead, 47,493 wounded and 23,218 missing, according to the U.S. Army’s official history.

After the end of the battle, on Jan. 28, 1945, Allied forces attacked Germany in unison, eventually leading to the Nazi surrender and the end of World War II in Europe.

In the town of Bastogne, where soldiers of the 101th Airborne held out despite being cut off and surrounded, shops and windows were decorated Saturday with American and Belgian flags. One local restaurant posted a drawing of an American flag and the message “thank you.”