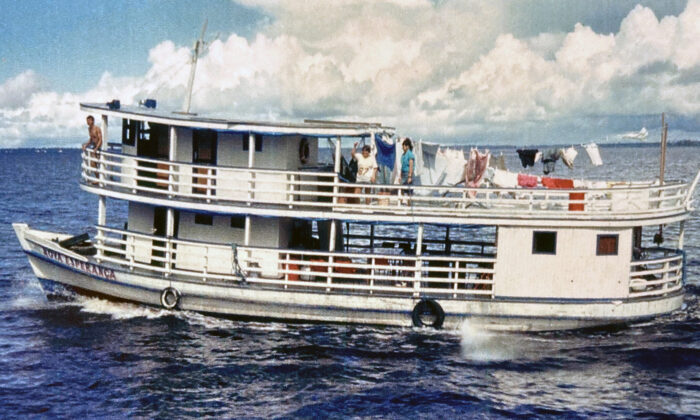 Life on the Nova Esperanza was about helping people living on the Amazon River. The Warners opened health clinics and started schools and churches. (Courtesy of David Warner)
Americas

Arizona native David Warner was used to traveling over great distances of water serving America as a petty officer aboard the aircraft supercarrier USS Independence (CV-62) in the 1970s.

But his most demanding and daring mission was being captain of his own 50-foot boat, the Nova Esperanza,  traveling up the Amazon  “about a week” upriver from the last major outpost of civilization, Manaus, Brazil.

“There was no way to tell how many miles that was,” David Warner said, “but if you travelled downriver for a few days, you’d reach Manaus. That’s how distances are measured there. If you got sick up river, or had a bad accident, you were on your own.”

Nothing he learned in the Navy, he said, prepared him for what he would do, see and feel in the 12 years he lived on the river—from 1985 to 1997—with his young California wife and his two children born in the Amazon region.

“The mission of the Independence was to keep the international peace in dangerous waters,” he said.  “The mission of the Esperanza was to bring peace and health to peoples so remote, some of them had no idea who the president of their country was; or had ever seen a doctor, or received basic medicines.

“The remotest river people we worked with could not read or write. In a small village of 70 people, maybe a single person could read. As a result, they had no records.

“They didn’t know when they were born, how old they were, when they were married, or for how long. There were no medical records. We implemented the first records for many small villages when we vaccinated them for malaria, mumps, measles, and chicken pox.”

The Warners were full-time unpaid volunteers financially supported, not by large organizations, but by individuals who knew what they were doing and sent money so they could work. Family members in Arizona sent their own money, raised more money from friends and, through word-of-mouth, came up with the $25,000 for the double decker Nova Esperanza, draft six feet, for shallow waters.

“Both our families got so behind what we were doing,” David Warner said, “that they sent a lot of money our way and got all their friends—and those friends got more friends—to support us.”

In that way, they kept going for 12 years.

“Our mission was to bring hope and help to people who had precious little of either,” he said. “Most of them had never been to school, so we built schools and taught them to read. No one had a Bible, of course, so we gave them those.

“We worked alongside them planting in their fields, fixing their boats, healing their wounds, whatever was needed.”

Elizabeth Warner said, “It was hard work, it was draining sometimes, dangerous at other times, but we loved being there because it was all about bringing hope, and that’s what God is all about. Hope.”

One of the benefits of their work was the impact it had on the locals about Americans, Elizabeth Warner said.

“We were in Manaus in a restaurant and there was an American there who was kind of talking down to the wait staff,” she said. “I could see the looks and almost sneers of the local people looking on.

“We found out that was not an uncommon scenario, sadly.

“After we had been in the area for a couple of years, some of the people we helped came to us and said, ‘You have really changed our idea of what Americans are like. You came to help us and live alongside us, not look down on us’.

“That really blessed me to represent our country in a positive way to them. We may be the only Americans they ever really get to know, and will always think Americans are people who care.”