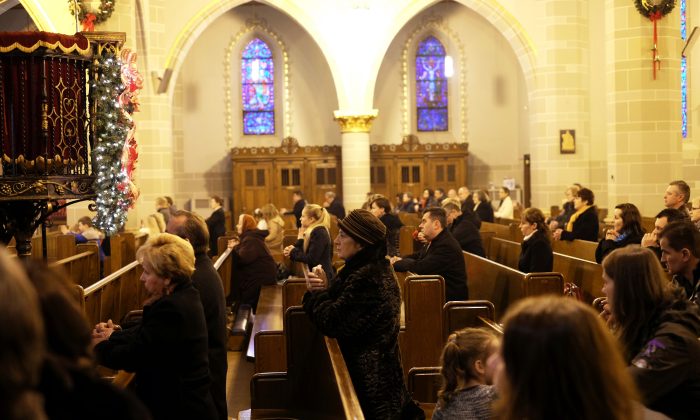 Americans, and the World, Are Becoming More, Not Less, Religious

It’s commonplace in many of the most influential public policy precincts in the nation’s capitol these days to say that Christianity is in steep decline in the United States, that the country is fast becoming more secularized with every passing day.

That certainly appears to be the case, judging by many aspects of the elite culture and the intellectual, social media, and political rhetoric our government sanctions, but a totally opposite picture is seen once you get outside of Amtrak’s Acela Corridor and the Los Angeles-San Francisco-Seattle axis to examine the data that reveals the real America.

There we find a nation whose people are becoming more—not less—involved in their churches, small groups, Bible studies, and community ministries.

Perhaps even more surprising is that the same thing is true about most people in the world, in their own ways.

This reality is made clear by data and analyses found in two remarkable books published in the last five years.

“The Triumph of Faith” by Baylor University professor Rodney Stark was published in 2015 and was followed by “The Myth of the Dying Church” by Glenn T. Stanton in 2019.

Both men have written numerous books, monographs, and articles and are accomplished statistical analysts. Between them, Stark and Stanton marshal a colossal gathering of data to make their closely related cases.

Among the data sources are Gallup’s World Poll for every year since 2005, multiple waves from the World Values Surveys, various Pew Research Center compilations, Baylor University’s National Religion Surveys, and the General Social Survey of the University of Chicago. Also, the joint work of sociologists Sean Bock of Harvard and Landon Schnabel of Indiana University.

Stark’s book is a comprehensive assessment of religious trends around the world.

“Contrary to the constant predictions that religion is doomed, there is abundant evidence of an ongoing worldwide religious awakening. Never before have four out of five people on Earth claimed to belong to one of the great world faiths,” Stark writes.

“Today, there are millions of devout Protestants in Latin America; not so long ago, there were none. Even so, Latin American Catholics are far more religious than ever before.

“Sub-Saharan Africa is now home to more church-going Christians than anywhere else on Earth, and North Africa and the Middle East are ablaze with Muslim fervor.

“Hinduism has never been stronger and India’s transport systems are straining to meet the demands of pilgrims. …

“Only in parts of Europe are the churches still rather empty, but this is not the reliable sign of secularization it has long been said to be; it is, rather, a sign of lazy clergy and unsuitable religions. As has been said, ‘Europe is a continent of believing non-belongers.’”

Something quite similar is found in America via Stanton, a Focus on the Family leader who decisively upends the conventional wisdom about the declining state of Christianity in this country.

“Liberal churches are hemorrhaging members. Churches that are bailing on Christian orthodoxy—those denying the deity of Christ; rejecting the reality of sin; doubting the historical reality of Christ’s death and resurrection; and embracing abortion, gay and gender politics—are all in drastic free fall. People are leaving those churches as though the buildings were on fire. They can’t get out fast enough,” Stanton writes.

“Biblical churches are holding strong. Churches that are faithfully preaching, teaching and practicing biblical truths and conservative theology are holding stable overall. Some are seeing steady growth and others are exploding. …

“Church attendance is at an all-time high. More Americans in raw numbers and as a percentage of the population, attend church today than at any other time in our nation’s history, including the colonial days. That’s hardly scary news.

“More young adults attend biblically faithful churches today than attended nearly 50 years ago. According to some of the best sociological data, the percentage of young adults regularly attending evangelical and non-denominational churches has roughly doubled between 1972 and today.

“Atheism and agnosticism are not growing wildly. Both have grown in the last few years, but they are an extreme minority, accounting for just about seven percent of all U.S. adults.

“The ‘Nones’ are not new unbelievers. The infamous ‘Nones’—those reporting to have no particular institutional—are indeed a growing category. This has been widely reported.

“But there is something very important to note here: They are not a new category. They are not folks who have left a once-living faith, but rather those who merely had a cold or lukewarm family history of church identity and now feel more comfortable saying ‘I don’t really identify with anything.’ It’s not a change in belief. Instead, it’s an honest explanation for where they’ve always been.”

Why should anybody—whether convinced agnostic or Bible-thumping fundamentalist—care about these facts? Three reasons:

First, because we are a representative republic. No public good—but a great many social, political, and moral ills—can come from having most Americans going in one direction on important questions about life and community while elite ranks of regulation and law-making head in the opposite direction.

Second, nobody in America wants any level of government to establish any Christian denomination as the official church and compel its support, financial and otherwise, by every citizen.

But every time elected, appointed, or career officials mandate actions to limit or suppress religious expression and practice, it widens the already serious divides between the government and the governed.

Third, strong churches that teach and practice genuine core Christian values of love and compassion for all individuals are essential to building strong communities and families, as well as prosperous economies and widening opportunities for everybody.

Mark Tapscott covers Congress for The Epoch Times and is founder and editor of HillFaith, an independent blog. He can be reached at mark.tapscott@epochtimes.nyc