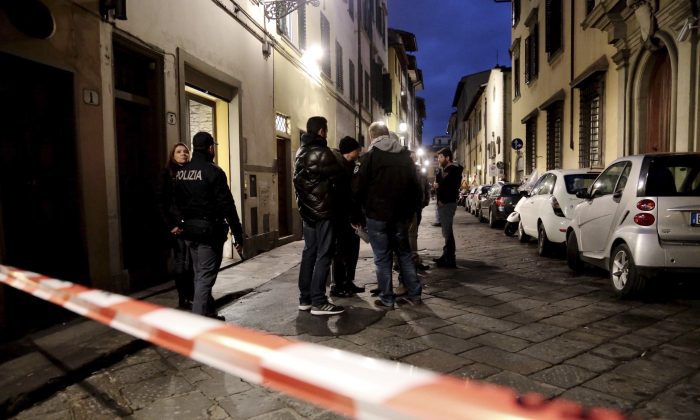 CORRECTS LAST NAME FROM OSLEN TO OLSEN- Italian police officers stand outside an apartment where 35-year-old American woman Ashley Olsen was found dead, in Florence, Italy, Saturday, Jan. 9, 2016. Italian police say the woman has been found slain in her apartment with bruises and scratches on her neck, but wouldnt comment on Italian news reports that the woman had been strangled until an autopsy is performed. (Maurizio Degl'Innocenti/ANSA via AP
Europe

Investigators: friends say US woman stayed behind at club
By The Associated Press

FLORENCE, Italy — Friends of an American woman found slain in her rented Florence apartment have told police she stayed behind at a nightclub when they left, investigators said Monday.

Coroners began an autopsy on Ashley Olsen’s body Monday afternoon. First results, including time and cause of death, could come as soon as Tuesday.

Investigators based in Florence’s prosecutors’ offices stressed that after questioning the 35-year-old woman’s boyfriend, who is an Italian artist in the city, as well as friends of Olsen they haven’t put anyone under investigation.

The investigators, who declined to be identified because the probe is still ongoing, said the woman’s friends told them they were together with Olsen at a Florence nightspot late Thursday. According to their account, the friends decided to leave but Olsen remained there.

Her body was discovered on Saturday afternoon after the boyfriend told the apartment’s owner he was worried because he hadn’t heard from her and they went together to open the apartment. Police have said the victim’s neck had bruises and scratches, indications of possible strangulation.

Investigators have said there were no signs of a break-in, indicating that Olsen likely knew her killer.

Olsen’s beagle, Scout, a frequent companion of the woman on strolls through Florence’s historic center, was found unharmed in the apartment.

The woman had lived in Florence for some three years and was known among the Renaissance art city’s close-knit expatriate community.

Her father, Walter Olsen, who teaches in Florence and is known in the design field, laid a floral bouquet and knelt for a few minutes in front of the apartment building, the Italian news agency ANSA said. He was accompanied by police and U.S. Consulate personnel, and didn’t enter his daughter’s apartment, which is officially under judicial seal because of the investigation, the report said.

Some 72 hours’ worth of video from two surveillance cameras in the street near OIsen’s home were being scrutinized by police in hopes of catching a glimpse of whoever killed her arriving or leaving the small apartment building.

The club where friends last saw Olsen is a popular stop on Florence’s night scene. It has been temporarily closed more than once in recent years for problems with the law, including alleged sale of cocaine and overcrowding.

With its fine museums and art-rich churches, Florence is a popular destination for Italian and foreign tourists, and draws many art students from around the world.

“Florence is safe,” the city’s police chief, Raffaele Micillo, was quoted by the Italian news agency ANSA as saying on Monday. Olsen’s death is “a very grave occurrence and we are giving it utmost attention and we are working in sync with the prosecutors’ office, but it could have happened in any city,” Micillo said.