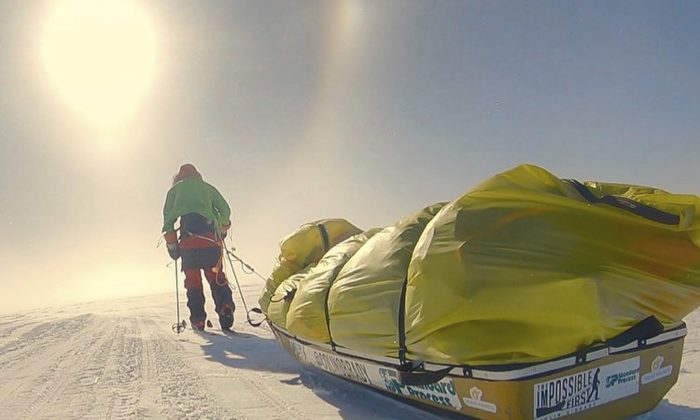 Colin O'Brady, poses for a photo while traveling across Antarctica, on Dec. 26, 2018. (Colin O'Brady via AP)
US News

An American man has become the first person to cross the Antarctic solo and unaided, dragging a  375-pound sled, including supplies, coast to coast via the South pole on the same journey that two years ago left a British explorer dead.

On Nov. 4, Colin O’Brady, 33, started the 930-mile trek, which he dubbed “The Impossible First.”  Just 54 days later, he posted a picture on Instagram of himself at the finish line making a tearful telephone call to his wife.

O’Brady, from Portland, Oregon, is now waiting for the arrival of a British army captain, Lou Rudd, who he had been racing uphill through the 9,000-foot tall mountains during the endless Antarctic summer day.

Other people have crossed the Antarctic, but with the assistance of reinforced supplies or kites that helped pull them forward. O’Brady made his journey unaided, carrying supplies on a sled that he dragged behind him.

O’Brady, already a world-record-holding endurance athlete, said he was preparing his Christmas Day oatmeal breakfast when he was hit by an idea: to finish the last 80 miles in one “ultramarathon” push.

Just 32 hours and 30 minutes later, he was standing at the wooden marker that indicates where the landmass of Antarctica ends, deep below the ice.

‘Locked in a Deep Flow State’

On the Instagram account where he has been documenting his journey, he posted a picture of himself calling his wife, Jenna Besaw.

“While the last 32 hours were some of the most challenging hours of my life, they have quite honestly been some of the best moments I have ever experienced,” he wrote. “I was locked in a deep flow state the entire time, equally focused on the end goal, while allowing my mind to recount the profound lessons of this journey.

O’Brady said he burst into tears calling his wife to tell her. “I was never alone out there … you walked every step with me and guided me with your courage and strength.”

In  2016, British explorer Henry Worsley collapsed from exhaustion just 30 miles from the finish, attempting to make the same journey.

In his final dispatch Worsley said, “A gradual grinding down of my physical endurance finally took its toll today, and it is with sadness that I report it is journey’s end, so close to my goal.” He radioed for help and was airlifted, to the hospital in Chile where he was treated for bacterial peritonitis, dehydration, and exhaustion before he passed away from organ failure.

Like Worsley, another British explorer had been inspired by Antarctic explorer Ernest Shackleton. Lou Rudd was attempting his voyage at the same time as O’Brady, describing how the two had met briefly on Nov. 9, before the American gradually pulled away.

A major challenge for Antarctic adventurers is the sastrugi—the ridges of ice whipped by the wind.

“Contrary to popular belief, Antarctica is not flat,” wrote O’Brady on Nov. 13. ” The South Pole is above 9,000 feet. I started at sea level on the Ronne Ice Shelf so I’m going uphill all day, every day. But, the real challenge is the sastrugi.”

“Not only am I pulling my 300lb sled all day, but I’m pulling it up and over thousands of these sastrugi speed bumps created by the violent wind,” he wrote.

O’Brady said that there were several times he had nearly called it quits.

“I wanted so badly to quit today as I was feeling exhausted and alone, “he wrote on one day.” But remembering all of the positivity that so many people have been sending, I took a deep breath and focused on maintaining forward progress one step at a time and managed to finish a full day.”

O’Brady described his impromptu decision to make a final dash for the end.

“As I was boiling water for my morning oatmeal, a seemingly impossible question popped into my head: I wonder, would be possible to do one straight continuous push all the way to the end?” he shared. “By the time I was lacing up my boots the impossible plan had become a solidified goal. I’m going to go for it.”

O’Brady said he is no longer the same person he was when he started out. “I’ve suffered, been deathly afraid, cold, and alone,” he wrote. ” I’ve laughed and danced, cried tears of joy and been awestruck with love and inspiration.”