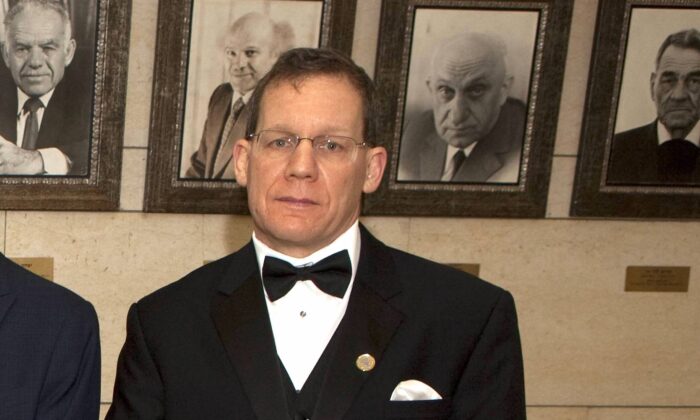 It took a federal jury in Boston less than three hours to return guilty verdicts on all six felony counts against Charles Lieber, the former chair of Harvard University’s Department of Chemistry and Chemical Biology.

Lieber, “one of the country’s top research chemists” according to The New York Times, lied to the FBI about his participation in Beijing’s Thousand Talents Program, didn’t pay income taxes on money from Chinese sources, and failed to report his Chinese bank account to the Internal Revenue Service.

The case against the Harvard academic was airtight. Nonetheless, members of America’s academic elite are up in arms that the Department of Justice prosecuted Lieber, and many are campaigning against law enforcement efforts.

China’s regime has bought the U.S. academic community and turned it against the United States.

“The conviction of Lieber is very good news,” Kerry Gershaneck, author of “Political Warfare: Strategies for Combating China’s Plan to ‘Win Without Fighting’” and a professor in Taiwan, told Gatestone. “This case is only the tip of the iceberg in terms of what needs to be done by the U.S. government to penetrate and prosecute China’s co-option of America’s academia.”

The Department of Justice didn’t go after Lieber for espionage or intellectual property theft. Instead, it hit him with relatively minor charges in order to obtain convictions. Yet make no mistake, Lieber’s activities were deeply injurious to the United States. The Harvard professor recruited U.S. talent to work in China. In 2011, Lieber had agreed to become a “strategic scientist” at the Wuhan University of Technology—and consequently a part of the Thousand Talents Program, an effort to attract foreign specialists for Beijing.

“While working on the Communist Party’s payroll, Lieber was in a perfect position to spot and assess potential vulnerable students and faculty for China to recruit,” Gershaneck said.

For his efforts, Beijing rewarded Lieber handsomely with $50,000 per month, among other payments.

“Scientists around the world, identified as leaders in areas of advanced research that are strategic priorities, are targeted by a well-funded sophisticated engagement that plays on their vanity, naiveté, and greed,” Charles Burton, once a professor at Brock University and now a leading expert on China’s infiltration of Canada, told Gatestone.

China apparently appealed not only to Lieber’s greed, but also to his vanity. Before conviction, the now-disgraced scientist told the FBI that he had collaborated with China to increase his prospects of gaining Chinese support for winning a Nobel Prize.

“The reason people like Lieber lie is because they are afraid,” Peter Zeidenberg, a Washington attorney representing researchers being investigated for China ties, told The New York Times. “It’s really sad. They are afraid to answer truthfully, ‘Are you a member of the talent program?’ I’m sure during the Red Scare, people said they were not a member of the Communist Party.”

A more likely explanation for Lieber lying to federal authorities is that he knew what he was doing was wrong and that he was aware that he was taking money to harm the United States. China’s Communist Party has been engaged in decades of taking—by guile, theft, and other means—scientific knowledge, know-how, and other valuable intellectual property. Lieber knew he was part of those Chinese efforts.

China’s theft of intellectual property alone injures the United States to the tune of perhaps $500 billion per year, according to John Ratcliffe, former director of national intelligence. Lieber’s efforts facilitated the loss of valuable technology on top of this staggering sum.

“For more than 70 years, the Chinese Communist Party has invested extraordinary effort into infiltrating and co-opting America’s academia,” Gershaneck said. “Academic infiltration and subversion are vital elements of the Communist Party’s political warfare against the U.S., and to this end, its United Front and intelligence organizations aggressively target America’s universities, individual scholars, think tanks, and even K–12 teachers and students.”

That effort has been successful. I’m told there are “thousands” of professors on Beijing’s payroll in California universities. And China is about to put even more effort into taking over foreign institutions of higher education.

“Chinese ruler Xi Jinping, in a major speech in September, stressed that it is a regime priority to attract foreign professionals to transfer state-of-the-art scientific know-how to China, saying this is crucial to China’s technological self-reliance and national rejuvenation,” said Burton, the Canadian academic now at the Ottawa-based Macdonald-Laurier Institute.

Xi is serious about attracting talents such as Lieber. In his September speech, Xi said he would “exhaust all means” to recruit foreigners. China is “more eager than any period in its history” for professional talent, Xi said.

He delivered his words at a two-day conference on luring foreign talent, the third nationwide meeting on developing technology.

The Chinese dictator established in September a two-decade timetable to become the world’s science and technology leader. He spoke about the struggle on the world’s “main economic battlefield.”

China’s regime believes the competition for talent is a war. In that war, China’s military has access to all of the technology in nominally civilian Chinese institutions and companies, and the Chinese military is planning to use this tech to develop the means to kill Americans by the hundreds of millions.

From the Gatestone Institute