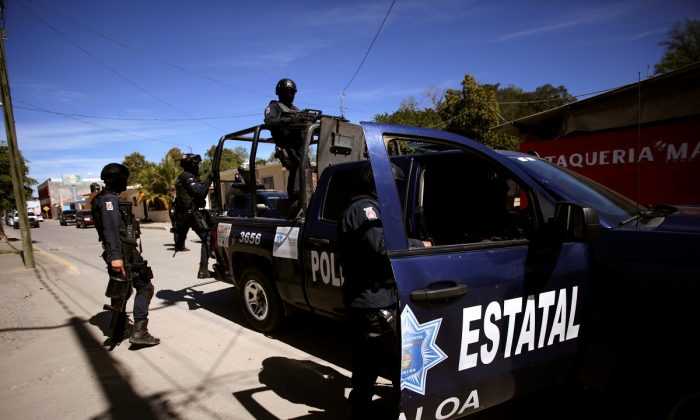 State police patrol ahead of the visit of Mexico's President Andres Manuel Lopez Obrador to Badiraguato, in the Mexican state of Sinaloa, Mexico on February 15, 2019. (Daniel Becerril/REUTERS)
Crime and Incidents

An American tourist couple were pulled out of their car at a checkpoint in Mexico and shot in the head, execution-style, in front of their  12-year-old son, according to reports.

The family from Utah were driving from Acapulco to a beach resort town through the dangerous Guerrero region, where armed gangs frequently use roadblocks to extort travelers, on July 19.

At around 4 a.m. they encountered a checkpoint said to have been set up by community police in some media reports, such as SDPNoticias, and said to be a roadblock run by gangs in other reports.

Paul D. Nielsen, 52, and Janeth Vázquez, 43, who is reportedly is originally from Puebla, Mexico, failed to stop at the checkpoint in Petatlan, according to the Salt Lake Tribune.

They were pursued by a gang of heavily armed men, who stopped them and shot them.

Their son survived the attack.

According to Nielsen’s younger sister, Vilate Ssempala, the roadblock was put up by a local gang to extort travelers.

The couple has been identified as Paul Nielsen, 48, and his wife, Janeth Vázquez, 43, who reportedly is originally from…

She told the Tribune that the mortuary described her brother as having execution-style gunshots to the face.

Local newspaper El Sol De Puebla, reported that police found the couple lying on their backs with gunshots to the head.

Their 12-year-old son, Joel Rojas, was taken to a nearby hospital. According to some reports he had been injured in the gunfire. However, other reports made no mention of gunshot injuries, specifically saying that he had suffered a psychological breakdown.

The family was just 10 miles away from their destination, the coastal town of Zihuatanejo.

Neilson’s sister Rose Neilson Nayler confirmed that her brother had been killed.

She has set up a crowdfunding campaign, which has already raised over $46,000 since their death. “We are trying to raise enough money to help his family in anyway they need,” she wrote on the GoFundMe page. “It is going to be a huge ordeal bringing his body back to the US and any amount will help.”

She added, “I can’t even begin to express my gratitude for all those who have donated to help Paul’s family during this tragic time.”

According to the Mexico News Daily, the U.S. Department of State said in a statement on July 20 that it was aware of reports of Nielsen’s death, saying “out of respect for the family during this difficult time, we do not have additional information to provide.”

The U.S. government in April issued a Level 2 travel advisory on Mexico due to crime and kidnapping, noting that “violent crime, such as homicide, kidnapping, carjacking, and robbery, is widespread.”

The state of Guerrero is one of five Mexican states where Americans are specifically warned not to travel due to crime.

“Armed groups operate independently of the government in many areas of Guerrero,” notes the advisory. “Members of these groups frequently maintain roadblocks and may use violence towards travelers.

In January, a report showed that Mexico’s homicide rate had jumped by a third in the last year, pushing it up into the top dozen most murderous countries in the world, with four people killed every hour.

It is the second year in a row that the homicide rate has broken previous records. Information from the Interior Ministry listed 33,341 murder cases last year, compared to 25,036 in 2017.

The 33,341 cases do not include the category of “culpable homicide” which adds another 17,000 deaths.

Mexico’s rising death rate pushes it higher and for the first time this year it will be listed in the top 20 countries experiencing the highest homicide prevalence rates, according to the World Economic Forum.

The rise in murders is linked to drug cartel violence that has continued to rise despite the military crackdown that started 12 years ago.