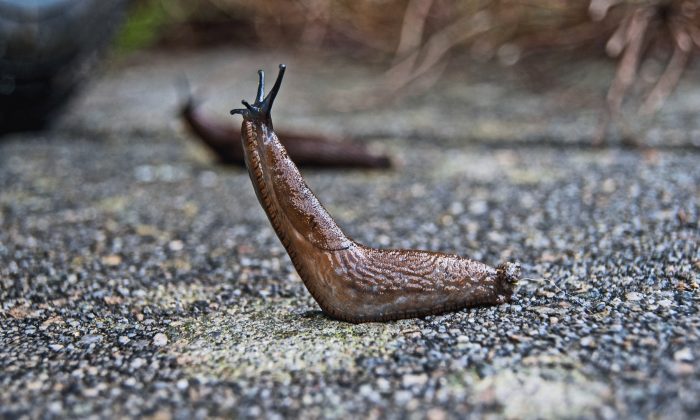 A slug rears up in a stock photo. (Pixabay)
By Simon Veazey

An American tourist who ate a slug on a dare was among three people recently infected with rat lungworm in Hawaii, according to health officials.

The three cases are isolated and occurred months apart, according to the Hawaii Department of Health (pdf). All three were visiting from the United States.

As the name suggests, rat lungworm is caused by a parasitic roundworm, Angiostrongylus cantonensis, that infects rats’ lungs. The parasite then finds its way into slugs, which are then eaten by rats, completing the cycle.

In humans, the primary way of becoming infected is through translucent baby slugs, which can have thousands of worms, hiding on unwashed produce.

According to health officials, one person was infected in December after “purposely eating a slug on a dare.” The others are thought to have picked up the infection through the typical route: eating unwashed salad and vegetables.

The case in December brought the annual total of infections in the state to 10 for 2018.

According to the CDC symptoms vary but can include severe headaches or neck stiffness. In rare cases it can result in neurological issues, severe pain, or even long-term disability.

“People present with symptoms of bacterial meningitis, such as nausea, vomiting, neck stiffness, and headaches that are often global and severe,” according to the CDC. “Additionally, abnormal sensations of the arms and legs can occur.”

Most infections resolve spontaneously without treatment because the worm cannot survive for long in the human body, according to the CDC.

“However, serious complications can rarely occur, leading to neurologic dysfunction or death.”

In Australia an aspiring 19-year-old athlete started to have seizures, became quadriplegic, and eventually died last year after his brain was infected by rat lungworm he had picked up by eating a slug on a dare some eight years earlier.

Sam Ballard died in November 2018 after years of seizures, and being forced to eat and breathe through tubes with constant care.

The fortune of the young rugby player from Sydney, whose mother described him as previously “invincible,” turned at a party in 2010.

“Twenty-year-old boys, red wine, alcohol, sitting at some mate’s table—a slug goes onto the table, someone banters about a dare,” his mother, Katie Ballard, told 7 News Sydney in an interview a year later. “Boys will be boys,” she said.